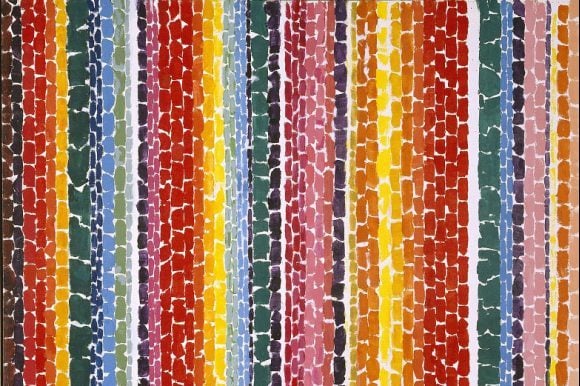 Masterpiece Story: Tiptoe Through the Tulips by Alma Thomas

Abstract Expressionism was a movement dominated by male artists. Painters such as Mark Rothko, Jackson Pollock and Willem de Kooning have held center positions on the stage as the stars of the movement, leaving many female Abstract Expressionists in their shadows – their work has been overlooked and underappreciated. One of these artists is Alma Thomas, a painter, educator and the first African American woman to have a solo exhibition of her work in the Whitney Museum of Art.

Born in 1891 in the state of Georgia, Thomas exhibited an interest in the arts as a young girl and dreamt of becoming an architect. In 1907, as a result of escalating racial tension in the south, her family made the decision to move to Washington DC, hoping for a better quality of life and a more positive future.

Following the family’s relocation, Thomas excelled in school and in 1924, graduated from Howard University with a degree in Fine Art. She pursued a career as an art teacher and would continue to teach until her retirement in 1960. Despite finding her vocation in education, Thomas still found time to paint in her spare time and upon retiring, committed fully to her practice. Enrolling in classes at the American University, Thomas learned about color field painting and theory and began to develop her signature style.

Thomas’ interest in color theory is evident in her work, resulting in beautifully expressive and experimental artworks. She was also greatly inspired by nature, as demonstrated in her artwork Earth Sermon – Beauty, Love and Peace. Although Alma Thomas’ life had clearly been dedicated to her craft, it wasn’t until the latter years that her work was institutionally recognized in an exhibition at the Whitney Museum of American Art in 1972. This exhibition made Alma Thomas the first African American woman to have a solo exhibition at the Whitney, an incredible achievement in itself, let alone at the age of 81.

Alma Thomas has also been recognized posthumously, most famously by Michelle Obama. In 2009, two of Thomas’ paintings were chosen by the First Lady to be hung within the White House for the duration of the Obama presidency. The painting Resurrection can be seen in the below photograph, hanging in the newly renovated Old Family Dining Room in 2015. It is poignant to see the first African American presidency recognize Alma Thomas, as she was a woman of firsts herself– transgressing expectations both artistically and socially and making a greater contribution to the art world than art history has allowed us to know.