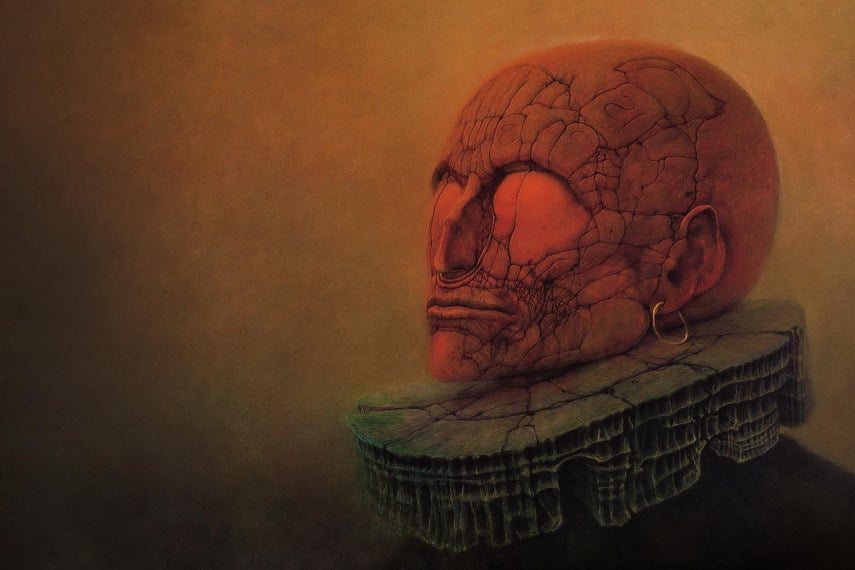 There are many fans of gruesome and gore art who are attracted to the dystopian surrealism of Zdzisław Beksiński. After all, he created such a gothic, haunting and stressful ambience in his paintings, making it hard to look away. He was a pioneer of Polish contemporary art. So, let’s have a look at his life and of course his work!

The Man before the Artist

Zdzisław Beksiński was born on 24 February 1929 in Sanok, southern Poland. He studied architecture at the Krakow University of Technology. He survived World War II and continued to draw provocative pieces during Communist times in Poland, when many forms of art were frowned upon, especially by the Soviet Government.

In 1955, Beksinski returned to Sanok after completing his studies and worked as a construction site supervisor and as a bus designer. He didn’t like either of the jobs.

While working at the construction site, Beksinski also occupied himself with photography and sculpture. His photographic works were characterized as surrealistic and expressionist.

In the early 1960s he gave up on photography. He was disappointed by the limited possibilities of altering the images. So, he turned to painting.

Beksinski started experimenting mostly with oils, even though he used acrylics too. He started working on the photographs he had previously taken by using the original photo and adding whatever he wanted. He never visited museums and did not admire any great artists in particular. While painting, he always listened to classical music, although he enjoyed rock music too. It was to music that owed his inspiration.

Regarding the meaning of his works, Beksinski insisted that there was none. In fact, that is the reason why the vast majority of them is untitled. He left it to the observer to comprehend each piece as he or she wanted.

Dystopia is defined as an imaginary, undesirable and horrific place. It is the exact opposite of utopia, which is the ideal place or society, where there is no crime or poverty. Surrealism was a 20th-century movement which promoted the full liberation of the subconscious. The two of them combined create the dystopian surrealism of Beksinski. It is this nightmarish ambient with scenes of grotesque, horror, death, anxiety and decay.

Beksinski named this period “Fantastic” period and it lasted up to the mid-1980s. The concept throughout the years, and even in his latest works, remains the same: oneiric and hellish, disturbing landscapes and figures.

Despite the grim overtones, he felt his works were misunderstood. According to him, they were optimistic and even humourous. Plus, he painted in great detail because, according to his words:

“I wish to paint in such a manner as if I were photographing dreams.”

In the mid-1980s, Beksinski saw his reputation skyrocket due to two factors: the first one would be his contract with Piotr Dmochowski in 1984. Dmochowski spread Beksinski’s art to the west. He had exhibitions in the USA, France and even Japan. The second factor would be Beksinski’s denial to paint what was popular in the art industry. He didn’t have any interest in becoming the critics’ favorite, he always created what he wanted and what was true to him.

In 1977, Beksinski moved to Warsaw with his wife, Zofia, and their son, Tomasz. In 1998, Zofia died of cancer. The next year, Tomasz, who had become a famous radio presenter, a music journalist and a movie translator, committed suicide. Beksinski never recovered from that and he closed himself off, even though he wasn’t very social anyway. In 2005, age 75, he was stabbed to death by the 19-year-old son of his caretaker, Robert Kupiec, because he refused to lend the teenager some money (around $100). Kupiec was sentenced to 25 years in prison on 9 November 2006.

Beksinski completed his last piece (the one underneath) on the day of his death, 21 February 2005.

Beksinski inspired many artists. Guillermo del Toro credits him for the movie Pan’s Labyrinth, for which he won an Oscar in 2006. Also, Beksinski’s works are often compared to those of Hans Giger, the Swiss painter who designed the eerie creatures of the movie Alien in 1979. In 2016, Jan Matuszynski directed a movie, The Last Family (Ostatnia rodzina), which is about Beksinski’s life.

A big red cross is placed today at the Burning Man location in the USA, as an ode to the artist.

In 2016, the Historical Museum in Sanok opened a gallery with more than 600 works of Beksinski. It is the biggest exhibition in the world with his artworks!

Here, you can read about Surrealism in Great Britain and in Poland!

Errika has a master’s degree in Modern and Contemporary History and dreams of becoming a curator. She writes articles about modern and contemporary art, fashion, and cinema. In her free time, she sculpts and paints miniatures and reads books.