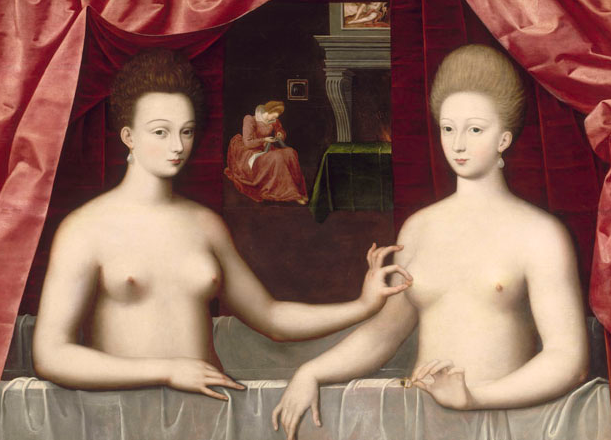 Fontainebleau School, Gabrielle d’Estrées and One of Her Sisters, c. 1594, Louvre, Paris, France.

The school began in 1528, during the reign of Francis I, and was made up of Italian and French artists. The Italian artists Francesco Primaticcio and Rosso Fiorentino evolved the school and created the interior decoration known as the “Fontainebleau style.” At the same time, along with the Italians, French artists Antoine Caron and Étienne Delaune studied at the Royal Palace of Fontainebleau in France.

The second period took place during the reign of Henry IV and included the French painters Toussaint Dureuil and Martin Fréminet. Flemish painter Ambroise Dubois and a few French artists might also have been members of the Fontainebleau School. Although Henry IV tried to revitalize the Fontainebleau School after Francis I, this period was less significant. However, the portrait of Gabrielle d’Estrées and One of Her Sisters depicts a story worth telling.

The detailed image shown above is that of Gabrielle d’Estrées, the mistress of King Henry IV of France (r. 1589-1610). In November 1590, Henry fell in love with Gabrielle while he was married to Margaret of Navarre. Margaret had been in exile in Usson since 1586 and bore no children to the King. Unsurprisingly, Gabrielle was one of Henry’s most famous and well-known mistresses due to her youthful beauty, and his loyalty to her was unwavering. He was known to have at least 50 different sexual partners. Henry’s love for Gabrielle was so strong that she convinced him to renounce his devotion to Protestantism and become Catholic instead.

Art historians have long debated the true meaning of this portrait, given its daring imagery. At first glance, the scene suggests a homoerotic connotation. Although, after learning the second woman’s identity, the portrait’s depiction begins to shift. The woman on the left is Gabrielle’s sister, Julienne-Hypolite-Joséphine, Duchess of Villars.

The figure’s presence in the background of the portrait reinforces the portrait’s connection to fertility; since the woman is shown actively sewing baby clothes. Another symbolic portion of the portrait is the velvet curtains that mimic a performance. However, knowing that Gabrielle was the king’s mistress, a performance of her pregnancy would not be uncommon. If anything, this portrait stands to validate her position as a royal mistress. During the Renaissance, mistresses of the court upheld a certain status, and often that status was linked to fertility. Finally, the inclusion of the ring in Gabrielle’s hand is recognized as Henry’s coronation ring, symbolizing his promise of marriage.

During the production of this portrait, Gabrielle was about 21 years old (a very fertile age). In 1592, Gabrielle’s father arranged her marriage to Nicholas d’Amerval. Further proving his affection, in 1594, Henry IV arranged for Gabrielle and Nicholas’ marriage to be annulled. A year earlier, Henry presented his wife, Margaret, with an annulment of their marriage in hopes of marrying Gabrielle.

By June 1594, Gabrielle gave Henry a son named Cesar of Bourbon. By January 1595, Henry officially legitimized his son in a document validated by the Parliament of Paris. Later, the pair had two more legitimized children, Catherine-Henriette, born in 1596, and Alexander, born in 1598.

Unfortunately, on the eve of their wedding in 1599, Gabrielle died and was never crowned queen of France. However, in another image by the Fontainebleau School, Gabrielle and her sister appear in the same setting as the masterpiece discussed in this article. Instead, the sisters are clothed and in a more respectable position; they do not gaze at the viewer. In this portrait, Gabrielle is pictured with her newborn son in the background. As art historian Kathleen Wellman suggests, the purpose of this second portrait was not intended to erase the sexualized version but rather to redefine it.

The juxtaposition of these two paintings raises the crucial question of whether the mistress could become respectable or even an acceptable queen – questions that defined Gabrielle’s tenure as royal mistress.

“Gabrielle d’Estrées: Nearly a Queen.” In Queens and Mistresses of Renaissance France.

Therefore, the portrait of Gabrielle d’Estrées and One of Her Sisters symbolizes the moment Gabrielle transitions from mistress to mother before the birth of the King’s first son in 1594.

Art Historian with a Master of Arts degree from Parsons School of Design. Specializing in Renaissance tapestries/textiles and Eighteenth-Century British garden designs. Period dramas, love them!