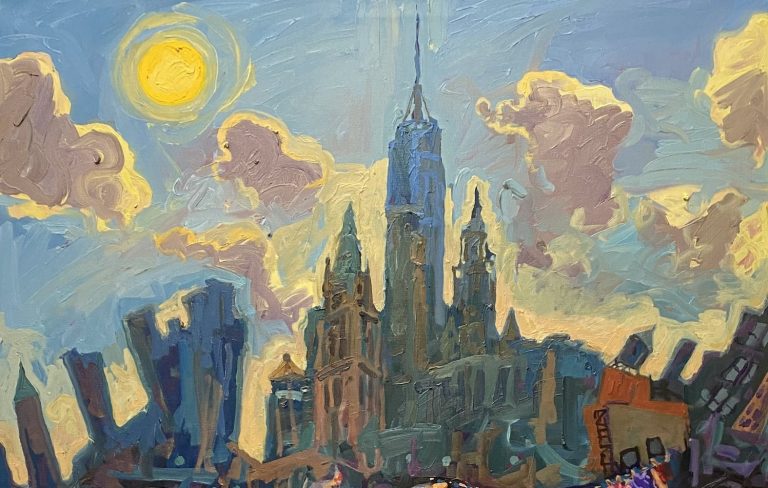 Alex Katz and His New York

Sonya Sklaroff is a contemporary American painter and artist best known for her cityscapes of New York City. A professor at Parsons School of Design since 1999, Sklaroff has received numerous honors for her work, and her paintings have been reviewed by The New York Times, The Washington Post, and other prestigious publications. Sklaroff’s most notable series, The Four Seasons of New York City, debuted at her solo exhibition held in the historic Algonquin Hotel. The exhibition was not only for local New Yorkers but for everyone who simply loves New York.

Sonya Sklaroff is unlike other typical cityscape painters. She prefers to present to the viewer not the quintessential skyline, but places that tourists tend to overlook – secret places of New York. With strokes of her brush she pays homage to the city where she lives. Her paintings, Sklaroff says, are poems of New York, poems which were just recently published in her new artist book – A Love Letter to New York City.

As the artist reveals, she is inspired by quotidian New York City scenes that surround her, and she often paints people enjoying daily life. These paintings were made during the Covid-19 pandemic, Sklaroff explained. Before the pandemic started, she painted what she observed and her main focus was visual and more representational. After the pandemic, her viewpoint changed and started to focus much more on the personal as she not only painted what she saw, but what she felt or imagined.

Sklaroff’s most notable series, The Four Seasons of New York City, are four oil on canvas works representing Summer, Autumn, Winter, and Spring. They were created in the past year, during the darkest days of the Covid-19 pandemic, exemplifying the universal feelings of hope, promise, joy, and renewal.

Sklaroff considers herself to be a “creative athlete” who paints and draws daily as a mental and physical exercise to keep her skills in excellent form.

As the artist says, she is always carrying her sketchbook and her watercolors and she draws what she sees on site. Even though her inspiration comes from external visual references, most of her work is made in her studio which she visits daily, and where she spends hours developing her personal style. She is always experimenting with color, composition, texture, light, form, or perspective.

Once a professor told me: The Art God will not come to your studio if you’re not there. So – I show up every day.

Vertical Shape of the Canvas

One notable and extraordinary aspect of Sklaroff’s paintings is the vertical shape of her canvases. As soon as a landscape representation is turned into a vertical format, the perspective is contorted and one feels a bit off-kilter. This is how Sklaroff, who possesses a strong traditional background, is able to produce work with a contemporary spin.

Although, Sklaroff’s paintings are her personal viewpoint, people find them relatable. The work is not bogged down with too much detail so that the viewer is not distracted by specifics. Rather the viewer can notice more about the feeling of the place rather than particular details of a scene. The same measure is applied to the places which are concrete and particular, but again, they are little snippets of New York that could be at any corner. Although the work is figurative, Sklaroff’s focus is on the abstract shapes of the scene.

My work is my own personal vision but I desire for it also to have a universal appeal so that everyone can relate to it.

The Choice of Color

Sklaroff has a scientific approach to color theory. She uses strong, contextual, and complementary colors in her paintings creating almost a Fauvist atmosphere. As the artist explains, one of her inspirations is the artist and her former professor Faith Ringgold, best known for her colorful narrative quilts, who emphasizes in her works the color and personal viewpoint.

I think about color all day long. My color theory classes were an integral part of my art education.

Although her paintings are a celebration of color, she also plays with light and shadow and challenges herself to capture the shifting effects of light.

Her paintings could be seen as a contemporary spin on New York as compared to Joseph Nicephore Niepce’s first photograph ever made or the famous French Impressionists’ rooftops in Paris.

But the best description of her art offers Sklaroff herself:

“My paintings are like personal visual poems. They show fragments of New York City that visitors tend to overlook – small blooming neighborhood secret gardens, stately water towers perched on rooftops, people enjoying a meal on their terrace at sunset, lovers smooching in a private corner in the springtime… My Four Seasons Series that I completed during the latter part of the pandemic display this personal viewpoint of New York. Through this series, I wanted to show that New York was like a living organism – it continued to grow and evolve through the pandemic; and its inhabitants never stopped living their lives, believing in better days to come.”