Alex Katz and His New York 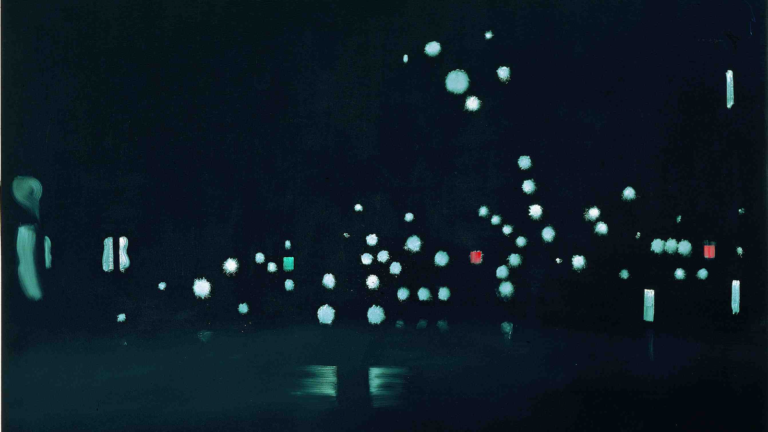 Alex Katz (born 1927) is an American figurative artist known for his paintings, sculptures, and prints. His paintings are divided almost equally into the genres of portraiture and landscape. Since the 1960s he has painted views of New York (especially his immediate surroundings in Soho), the landscapes of Maine, where he spends several months every year, as well as portraits of family members, artists, writers and New York society protagonists.

His paintings are defined by their flatness of colour and form, their economy of line, and their cool but seductive emotional detachment. A key source of inspiration is the woodcuts produced by Japanese artist Kitagawa Utamaro.

In the early 1960s, influenced by films, television, and billboard advertising, Katz began painting large-scale paintings, often with dramatically cropped faces. Ada Katz, whom he married in 1958, has been the subject of over 250 portraits throughout his career.

To make one of his large works, Katz paints a small oil sketch of a subject on a masonite board; the sitting might take an hour and a half. He then makes a small, detailed drawing in pencil or charcoal, with the subject returning, perhaps, for the artist to make corrections. Katz next blows up the drawing into a “cartoon,” sometimes using an overhead projector, and transfers it to an enormous canvas via “pouncing”—a technique used by Renaissance artists, involving powdered pigment pushed through tiny perforations pricked into the cartoon to recreate the composition on the surface to be painted. Katz pre-mixes all his colors and gets his brushes ready. Then he dives in and paints the canvas—12 feet wide by 7 feet high or even larger—in a session of six or seven hours.

After 1964, Katz increasingly portrayed groups of figures. He would continue painting these complex groups into the 1970s, portraying the social world of painters, poets, critics, and other colleagues that surrounded him. He began designing sets and costumes for choreographer Paul Taylor in the early 1960s, and he has painted many images of dancers throughout the years. One Flight Up (1968) consists of more than 30 portraits of some of the leading lights of New York’s intelligentsia during the late 1960s, such as the poet John Ashbery, the art critic Irving Sandler and the curator Henry Geldzahler, who championed Andy Warhol. Each portrait is painted using oils on both sides of a sliver of aluminium that has then been cut into the shape of the subject’s head and shoulders. The silhouettes are arranged predominantly in four long rows on a plain metal table.

New York has had a profound effect on the shaping of Alex Katz’s artistic career. Describing it as an ‘ impossible, uncivilised place’, Katz tells TateShots how the city changed completely after the emergence of Jackson Pollock, and how this in turn led Katz to pursue what he calls ‘the immediate present’ in his work.