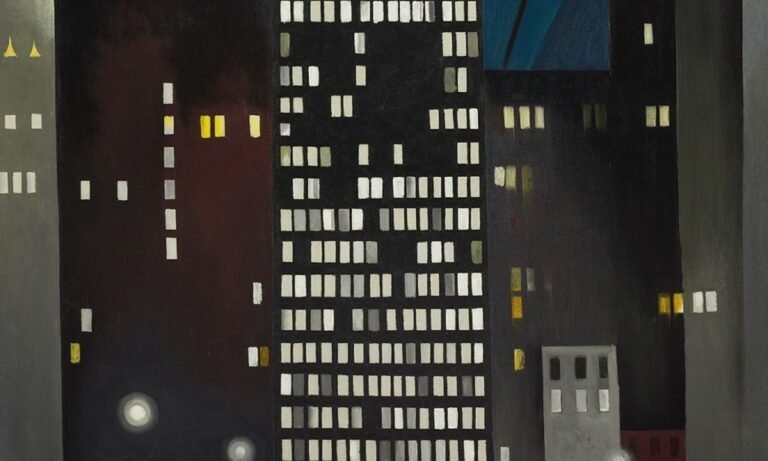 There are many reasons to fall for New York. The City that Never Sleeps was also a source of endless inspiration for many famous artists. Some of them portrayed it from an unexpected angle. Here you are: 10 unexpected paintings of New York:

To Italian-born Joseph Stella, who immigrated to New York at the age of nineteen, New York City was a nexus of frenetic, form-shattering power. In the engineering marvel of the Brooklyn Bridge, which he first depicted in 1918 and returned to throughout his career, he found a contemporary technological monument that embodied the modern human spirit. Here, Stella portrays the bridge with a linear dynamism borrowed from Italian Futurism. Stella transformed the Brooklyn Bridge into a twentieth-century symbol of divinity, the quintessence of modern life and the Machine Age.

Stella made numerous small studies of the bridge and five major oils; Old Brooklyn Bridge was one of the last. His richly colored, fractured composition not only reflects his modernist approach, but also recalls the stained-glass windows of Gothic architecture. Stella himself alluded to this marriage of the new and the old, describing the bridge as a “shrine containing all the efforts of the new civilization of AMERICA.”

Sorolla, a Spanish impressionist painter was a great success in United States. This work is very interesting as it shows an “urban Sorolla” hardly seen in his large works. The painter can be seen working from the window of his room in New York in this gouache, with a view over Fifth Avenue. The quick brushstrokes on the card capture the dynamic urban life filled with automobiles. Sorolla recognised these as signs of “modern life”. The parallels with major Impressionist works, like Caillebotte, Pisarro works are clear.

Childe Hassam with his wife returned to the United States from France in 1889. Hassam found a studio apartment at Fifth Avenue and 17th Street. The fashionable street was traveled at that time by horse-drawn carriages and trolleys. It was one of his favorite paintings and he exhibited it several times. Hassam enthusiastically painted the genteel urban atmosphere of New York that he encountered within walking distance of his apartment, and avoided the squalor of the lower-class neighborhoods. He proclaimed that “New York is the most beautiful city in the world. There is no boulevard in all Paris that compares to our own Fifth Avenue…the average American still fails to appreciate the beauty of his own country.”

4. Francis Picabia, New York as Seen from Across the Body

The two week visit to New York lasts almost six months. Gabrielle Buffet-Picabia wrote in her book, L’Ere Abstraite: “… the confrontation of modern European art with the New World and even the presence of Picabia in the United States and later that of Marcel Duchamp, delivered the artists and intellectuals from the obsession of the European academic tradition and made them aware of their personal genius.” As Picabia leaves his mark on the city, New York leaves its indelible mark on Picabia; its extreme modernity, the paradigm of the spirit of the industrial revolution, supports his already advanced ideas : here the machine turns incessantly. Picabia writes in 1913, “New York is the cubist city, the futurist city. It expresses modern thought in its architecture, its life, its spirit.”

In New York Pavements Hopper used bold cropping, an elevated point of view, strong diagonal lines, and a simple, bleached palette to achieve an odd and detached effect. From a bird’s-eye perspective, the only hint of narrative is the figure emerging from the lower left.

Rothko’s street scenes and subway pictures of the 1930s, created before his famous abstract phase have been compared to examples of Depression-era realist painting, but this resemblance is likely based on the perception of a shared urban motif. Rather than providing a “realistic” portrayal of the city life, Rothko seems far more interested in conveying the perceptual experience of architectural space, using abstract compositional arrangements to explore the relationship between the painting and its viewer, an element that would play a critical role in the artist’s later works.

Georgia O’Keeffe created a series of paintings of New York skyscrapers between 1925 and 1929. They were made after O’Keeffe moved with her new husband into an apartment on the 30th floor of the Shelton Hotel, which gave her expansive views of all but the west side of the city. She expressed her appreciation of the city’s early skyscrapers that were built by the end of the 1920s. One of her most notable works, which demonstrates her skill at depicting the buildings in the Precisionist style, is the Radiator Building—Night, New York, of the American Radiator Building.

She was interested in capturing “the mystique of the skyscrapers” that were a symbol of the modern world, and, at that time, a largely American phenomenon. Claude Fayette Bragdon, an American architect, said, “Not only is the skyscraper a symbol of the American Spirit—restless, centrifugal, seriously poised—but it is the only original development in the field of architecture to which we can lay unchallenged claim.”

In Frozen Assets, Rivera coupled his appreciation for New York’s distinctive vertical architecture with a potent critique of the city’s economic inequities. The panel’s upper register features a dramatic sequence of largely recognizable skyscrapers, most completed within a few years of Rivera’s arrival in New York. In the middle section, a steel-and-glass shed serves as a shelter for rows of sleeping men, pointing to the dispossessed labor that made such extraordinary growth possible during a period of economic turmoil. Below, a bank’s waiting room accommodates a guard, a clerk, and a trio of figures eager to inspect their mounting assets in the vault beyond. Rivera’s jarring vision of the city—in which the masses trudge to work, the homeless are warehoused, and the wealthy squirrel away their money—struck a chord in 1932, in the midst of the Great Depression.

In 1931, Léger made his first visit to the United States, where he traveled to New York City and Chicago. In 1935, the Museum of Modern Art in New York City presented an exhibition of his work. In 1938, Léger was commissioned to decorate Nelson Rockefeller’s apartment. During his American sojourn, Léger began making paintings in which freely arranged bands of color are juxtaposed with figures and objects outlined in black. Léger credited the neon lights of New York City as the source of this innovation: “I was struck by the neon advertisements flashing all over Broadway. You are there, you talk to someone, and all of a sudden he turns blue. Then the color fades—another one comes and turns him red or yellow.”

New York City I, or rather the series of works later brought together under the title New York City, marks the beginning of a new phase in Mondrian’s work. The black lines have disappeared along with the rectangles of primary color, which since the 1918 Composition: Color Planes with Gray Contours had formed a solid flat totality with the lines and the white that had previously been the background. Instead, lines in the primary colors – yellow, but also red and blue – traverse the square canvas, interweaving with each other.