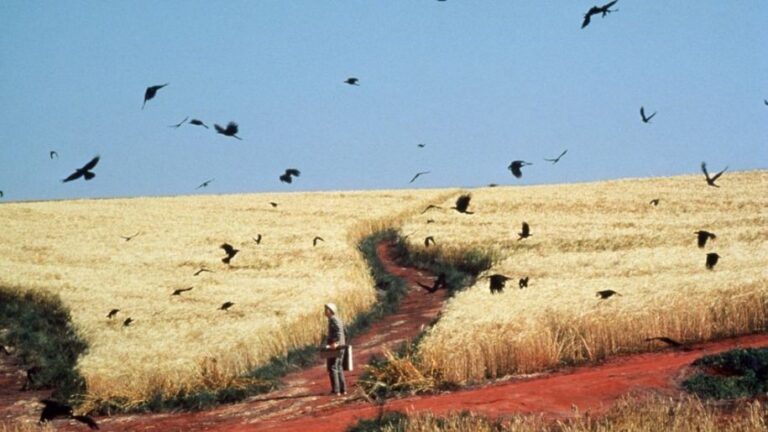 Still from “Dreams” by Akira Kurosawa.

Given the central nature of work in our everyday life, self-isolation and quarantine can sometimes be hard. Our postmodernist addiction to work has transformed the blessing of free time into a nightmarish tyranny which deeply haunts our being as we languidly move about the new “iron cage” of our homes. For that reason, this list was born of a little creative use of leisure time. Featured here are 5 well-received, art-related films which will help you view your free time as a creative outlet and not a burden.

Russian director Aleksandr Sokurov succeeds in composing an epic, dream aria in experimental cinema. It is inspired by and devoted to the Hermitage Museum in St.Petersburg. Inside the Hermitage “ark”, Russia’s scathing memoirs unravel a story so beautifully narrated that it manages to encapsulate the pure essence of the Russian national identity in its post-Soviet state. Sokurov mediates the notion of cultural identity by capturing the flow and fluidity of historical time in a pure, cinematic language that manifests itself in a single breath. This is expressed in how he moves his camera fiercely around the dark corners of the museum in a single, unbroken traveling shot.

Akira Kurosawa unveils his deepest thoughts and fears in this hauntingly beautiful art-house film which has been compiled as a collection of 8 fragmented vignettes. Each fragment is inspired by the director’s dreams. In these portrayals, Kurosawa’s magical realism and his love for modern tales blend together with a visually astonishing conceptualization of how dreams become reality.

Crows, the fifth dream, offers an immersion into a world created out of the paintings of Vincent Van Gogh. This dream depicts an impressionist space dominated by an impressive use of color. The visual fascination of the depiction reveals a loner protagonist interacting with and asking for directions of the people who compose Van Gogh’s paintings.

This beautiful art-house film gives an unprecedented insight into the artistic process of David Lynch, one of the best-selling surrealist directors in the world today. Through experimental, behind-the-scenes footage of Lynch working in his art studio, several mundane objects of everyday life can be seen transformed by his hands. Things such as his cigarettes, canvas, paintings, and even hair, become sacred totems through his art.  Exclusive interviews with the artist help to create Lynch’s enigmatic portrait and shed light on his weird, surrealistic method.

Rick Barnes, Olivia Neergaard- Holm, and Jon Nguyen try to offer a well-rounded portrait of David Lynch, but they soon become hypnotized by his mesmerizing personality. Despite this, The Art Life offers a thick description of Lynch’s artistic process. The film focuses on his paintings, even though it is a completely different medium from the art-related films that made him famous. As B. Kinsberg of the New York Times once wrote, “Lynch’s paintings are terrifying. One day, he just had a sudden urge to watch them move.”

Edo Betroglio creates a well-oiled, experimental cinema “time capsule” which engulfs the mind-blowing New York 80’s art scene. Downtown 81 captures that -once in a lifetime- New York moment through the eyes of Jean- Michael Basquiat. Basquiat was the star of the Neo-Expressionist movement and one of the most successful painters of his time. Rap, punk, experimental rock performers, painters, and the East Village art and music scenes join forces creating a previously un-imagined artistic boom. There are some beautiful camera moves around New York, and the film has terrific underground live music. This of course includes Basquiat’s no-wave band, Grey. But the real magic of the art-related film lies in Jean- Michael’s pursuit of beauty in New York’s underworld.

In this straight-forward, punch-in-the-face documentary, Klayman visually tells the story of Ai Weiwei, China’s most famous international artist. Her well-rounded art film offers important insights into each and every aspect of Ai WeiWei’s pluralistic career as a conceptual artist, photographer, activist, architect, and social critic. The result is an intimate, enigmatic and electric experimental cinema portrait of this deeply political and uncompromising artist. Which explains why he is one of the most known critics of the Chinese state. The take-home message of this art-related film should be Ai WeiWei’s words. “What counts,” he says, “are the tens of thousands of lives ruined because of poor construction of schools in Sichuan, because of blood sellers in Henan, because of industrial accidents in Guangdong, and because of the death penalty. These are the figures that really tell the tale of our era.”

George was born and raised in Athens, Greece. He is currently a research master student of Sociology of Culture and the Arts at the Erasmus University of Rotterdam. He wishes he was the lovechild of Alejandro Jodorowsky and Walter Benjamin.

If you’re looking for other art-related films to watch, you might enjoy: