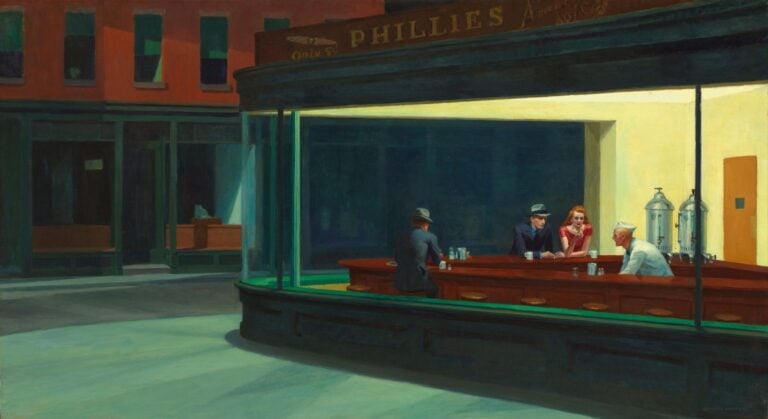 Edward Hopper's Nighthawks is one of the best known images of 20th-century art that has also become one of the most popular meme sources of the 21st century, appearing on the Internet in endless renditions.

Edward Hopper's melancholic paintings are an invitation to imagine. That is to say, you feel like a weird observer like in Hitchcock’s Rear Window. The scenes take place in “no places” such as this restaurant, which was inspired by “a restaurant on New York’s Greenwich Avenue where two streets meet” but at the same time it’s universal, timeless. Nothing in the image tells us to “get into” the restaurant and the human figure are four night owls lost in their thoughts.

Edward Hopper's images have indeed inspired movie productions and many generations of artists, but clearly Nighthawks is the one that has endured the most variations, even before internet was around. Therefore, I would like to go the other way around and pay attention to how well known fictional and real personalities invade the restaurant of Nighthawks.

Indeed, everyone can find their own favorite Nighthawks meme. What comes next is my personal selection of parodies and variations.

Moe’s Bar has moved to the Nighthawks corner.

Who watches the watchmen?

Dr. Manhattan serves coffee to Nite Owl, Silk Spectre and Adrian Veidt / Ozymandias. But, what happened to the Comedian?

Capitain Kirk and Spock left the Enterprise in this space Nighthawks version. "Live Long and Prosper."

This Banksy parody shows a fat, shirtless man in British flag underpants standing outside the diner, having just smashed the window with a nearby chair. Meanwhile, inside the diner, our nighthawks remain calm.

We feel the same loneliness as the original one, but then we have some kind of déjà vu. Does this image look familiar to you too?

Sometime before dawn, the heroes of Gotham and Metropolis meet for coffee. Who knows which villain they just defeated?

If you too get emotional every time you see a Studio Ghibli's production, you'll find in this variation some of their most mythical characters!

This one might represent the difficult times we live in: the Nighthawks in COVID-19 times. The picture translates the great city desolation, now even without his characters. Edward Hopper’s images became viral in the first weeks of the quarantine. Indeed, one might say that we were are all in Edward Hopper paintings.

The illustrator Dean Roher played with Edward Hopper's iconic images by removing all the characters from them. Yet with that simple gesture, it becomes evident that the force of the American painter's images resides in his empty interiors.

Tell us what is your favorite version of the Nighthawks?

Fan of Nighthawks? Have a peek into other paintings by Edward Hopper:

Cèlia is an Art Historian from Barcelona. She graduated specialized in contemporary art and finished her Research Master in Art and Design. She lived in Berlin for a year and came back to Barcelona where she worked as an Art Consultant. Her research focuses on the image, specially the post-photographic theory.