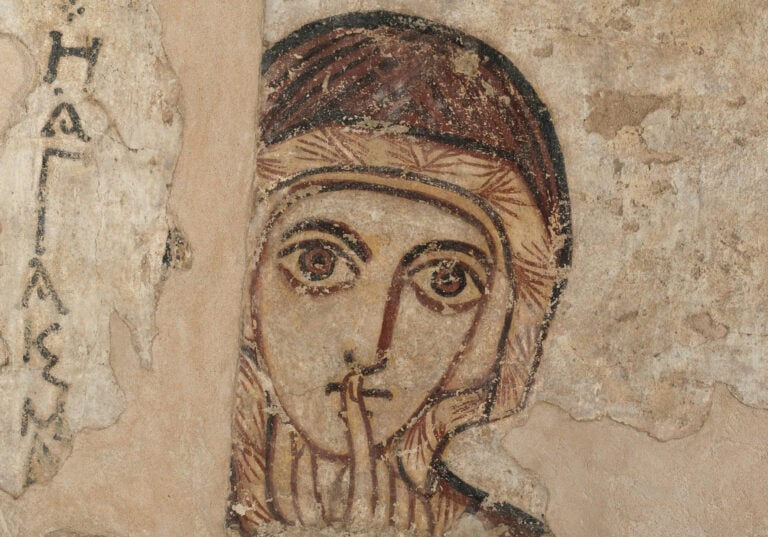 All Saints Day In Famous Paintings

To the south of Egypt is the mysterious land of Nubia. It has a complex history due to the different states and religions that have occupied the area. The Kingdom of Nobadia was one of them. It existed from the 4th to 9th centuries CE and later ruled as a Coptic Christian state. Christian art flourished, and Saint Anne is a masterpiece of Early Christian Nubian art. It is now displayed in the Faras Gallery of the National Museum in Warsaw.

The Kingdom of Nobadia was converted to Christianity in 548 CE by missionaries sent from Empress Theodora of Byzantium. During the Medieval era, the Kingdom of Nobadia was like a Christian island surrounded by the Islamic sea of Northern Africa. It was therefore an isolated Christian community that developed upon its Byzantine origins. Its religious beliefs and artwork slowly developed their own local identity. Saint Anne is a great example of this Christian Nubia.

Saint Anne is a fresco from the 9th century CE. It depicts the Christian saint, who was the mother of Mary and the grandmother of Jesus. Saint Anne is not mentioned in the Four Gospels of the Bible but is found in the apocryphal Proto-Gospel of Jacob from the 2nd century. Veneration of Saint Anne began in the 5th century CE when Mary was recognized as the “Mother of God.” Saint Anne achieved even greater devotion in the 9th century when the Byzantine Emperors initiated her cult with a great building program of churches. When Saint Anne was painted, the saint’s importance was strong, and she was revered by the local Christian Nubians.

Saint Anne is the protector of marriage, women, fertility, and child-delivery. In the Proto-Gospel, Anne was originally described as being infertile and was vexed by her inability to have a child. A woman unable to conceive was considered a disgrace by the Jewish community. So Anne prayed and was answered by a messenger angel who told her that she would conceive a child blessed by God. Nine months later her daughter, Mary, was born to great celebration. Anne thanked God for conceiving and birthing Mary. A Christian miracle had occurred.

Saint Anne is a fragment of a larger fresco that adorned the northern aisle of a cathedral in Faras, Sudan. The surviving fresco depicts Saint Anne with a slight tilt of her head. This indicates she was probably holding her daughter Mary in her lap as seen in many contemporary “Mother and Child” images. The fresco was painted most likely for female worshipers to aid them in prayer. Saint Anne holds her index finger to her mouth indicating silent prayer. This gesture is rare in Christian art, but was a common practice for Coptic Christians of the 9th century. The index finger held to the mouth protected the worshiper’s heart against evil forces.

Around the edge of Saint Anne is a broken inscription that reads “Anne, Mother of Theotokos Holy Ma,” with “Ma” probably being “Mary.” The compositional simplicity of Saint Anne almost alludes to the icons of the Byzantine Empire. It has a white background with black lettering and the Saint’s head in reddish brown hues. The lines and colours are bold and solid. It is a definitive example of the art of Early Christian Nubia. Saint Anne is distinctive. Saint Anne is classic.