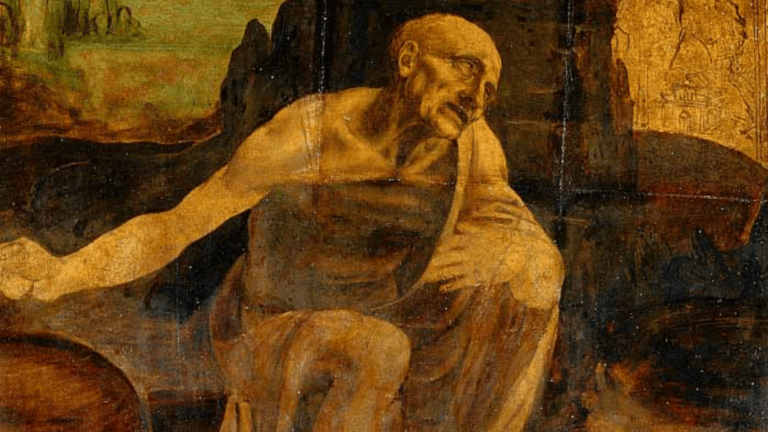 A very special painting has just arrived in New York! To honor the five hundredth anniversary of the artist's death, Leonardo da Vinci's Saint Jerome Praying in the Wilderness is on loan from the Vatican to the Metropolitan Museum of Art.

The painting hangs alone in a darkened gallery in the Met's Lehman Wing. Walk in, turn around, and there it is! With a spotlight illuminating it, a black wall behind it, and only a few explanatory texts on nearby walls, there's little to distract viewers from this masterpiece. During a recent members' preview, people took turns going up to look at the painting closely, then stepped back or sat on benches to contemplate it further. The mood was hushed, though not totally silent. The experience felt like taking part in a religious rite. But what's so important about this painting to deserve such a treatment?

Leonardo da Vinci (1452-1519), creator of the Mona Lisa, The Last Supper, and more, was the most famous artist of all time. Half a millennium after his death, he regularly makes headlines - and inspires controversy - for things like the bestselling novel that bears his name and the record-breaking sale of his Salvator Mundi in 2017.

However, Leonardo didn't make as many paintings as his reputation would suggest, and he finished even fewer. He was notorious for leaving paintings incomplete, and Saint Jerome was one of them. But that's ok. Because it was never finished, it allows people to see how Leonardo worked - what his underdrawings looked like, the order in which he painted different sections, etc. Sharp-eyed visitors can even see some of Leonardo's fingerprints on the surface.

Saint Jerome (c. 347-419/420 CE) was an influential Christian writer and theologian (religious scholar). His works are so important that he is considered a Father of the Church. Leonardo's Saint Jerome Praying in the Wilderness depicts him in later life, when he lived as a hermit in the desert. He is aged, bald, and practically naked. He kneels on the ground and looks up, supposedly at a crucifix Leonardo never painted. His face and much of his body are fully realized, but his arms are not.

Beneath the saint is the sketched outline of a lion, his companion in the wilderness. The two figures inhabit a rocky grotto similar to the settings Leonardo used in many other works. A section on the right is merely sketched in. It's interesting how Leonardo completed some areas fully but barely touched others. He's known to have been a perfectionist, so it's unsurprising that he finalized each area to his liking before moving on.

Leonardo's extensive knowledge with human anatomy is evident in places like Saint Jerome's neck, shoulder, and right leg. You can clearly see every muscle and ligament. The saint's expression of tortured piety is also very characteristic of Leonardo, who was fascinated with how human emotions manifest through the face and body. Despite being only partially completed, this is still a powerful work.

Leonardo da Vinci's Saint Jerome Praying in the Wilderness hangs in the Robert Lehman Wing of the Metropolitan Museum of Art in New York City. The show officially opens on Monday, July 15 and runs until October 6, 2019. Visit the museum's website for more information.

Fun Fact: Leonardo's Saint Jerome was once owned by Angelica Kauffmann, a successful female artist in the eighteenth century. Learn about Kauffmann and her remarkable career here.