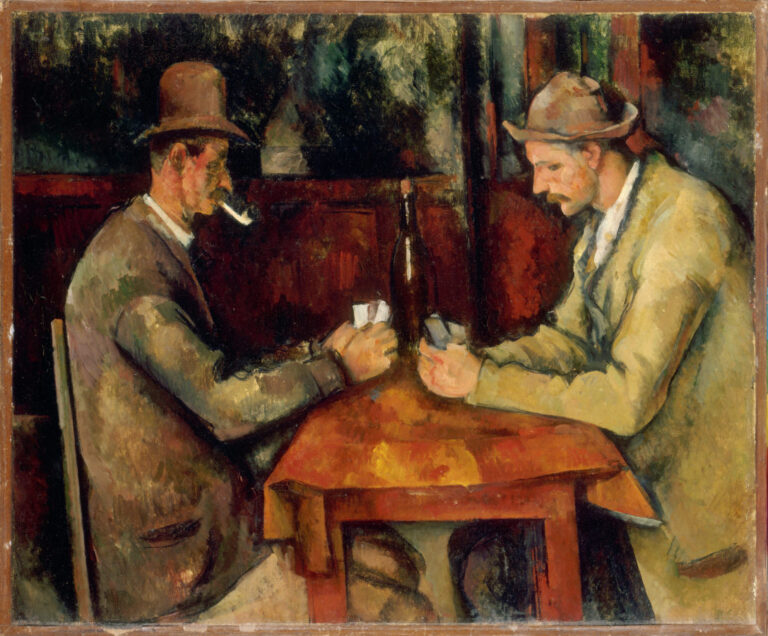 The Card Players subject were painted by Paul Cezanne five times. Why it’s so important? The series is considered by critics to be a cornerstone of Cézanne’s art during the early-to-mid 1890s period, as well as a beginning to his final years, when he painted some of his greatest works. In 1880s Cezanne was synthesising and consolidating his art, he moved decisively away from Impressionism to paint compositions in which he used verticals, horizontals and diagonals both to build up mass and to establish structure.

All five paintings depicts Provençal peasants smoking pipes and playing cards. Some of this men worked on the Cezanne family estate. Before painted them in a composition, the artist created many sketches. But look at the peasants – they look like a human still life. Every scene is quiet and full of concentration.

The subject of card players is not new – the painter adapted a motif from 17th-century Dutch and French genre painting which often depicted card games with rowdy, drunken gamblers in taverns. The difference is, that those 17-th century paintings were full of drama, hysteria and baroque energy. Cezanne’s works have been noted for their lack of drama, narrative, and conventional characterization. The men are not drinking. We also can’t see any money – this attributes were typical for Dutch and French genre painting.

As I’ve mentioned, there are five paintings. The first one, from Barnes Foundation is the largest one and includes the additional figure of a standing child. Metropolitan Museum’s follows the composition from Barnes Foundation. In the last three paintings, Cézanne continuously pared away details, focusing on just a pair of card players.

One of the Card Players are in private hands. In 2011, Qatar’s royal family paid Greek shipping magnate George Embiricos more than $250 million for the honor of owning it, setting a new record for the highest price ever paid for a work of art.