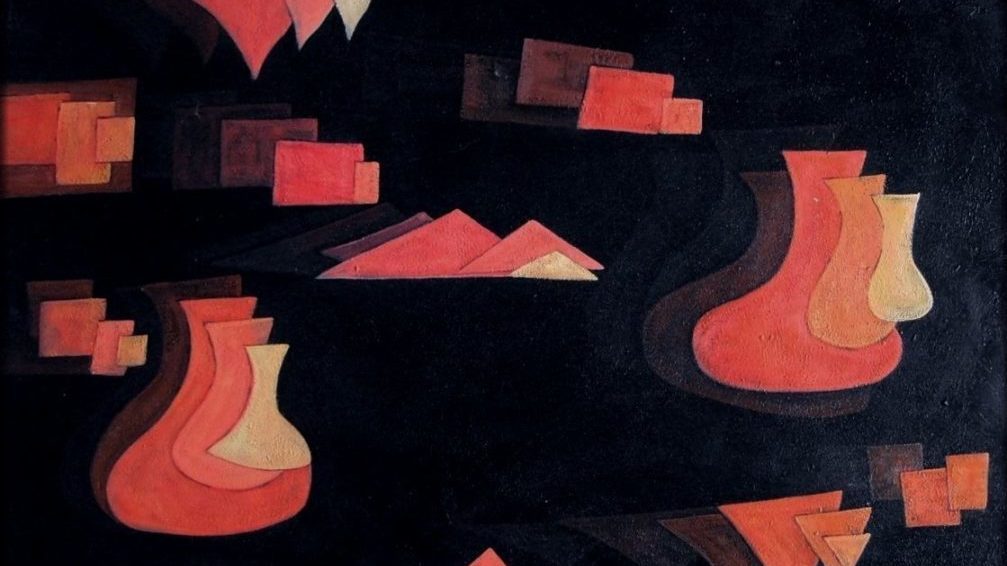 Paul Klee was a “musical” painter, not least because he chose the violin and bow before brush and easel.

Klee’s father was a music teacher and his mother a singer, which had a profound effect on his approach to painting.  Fugue in Red (1921) is one of many titles that demonstrate the importance he placed in music declaring the music of Mozart in particular, “(the)… ultimate pinnacle of art.”

So, in what way is Fugue in Red musical? A painting is a snapshot of a moment in time, whereas music can only speak its message over a period of time; Klee wanted to adopt processes from music to add temporality to his paintings, at a time when the nature of art was changing rapidly. Due to a craving for new ideas at the end of the century (fin de siècle) and the increasing threat from photography on visual art; the nature of painting was changing. Where painting was once the only visual means of remembering Kings, Queens and clergy, so many years later, photographs were fast becoming quicker and more readily available, even to the less well off.

Art had to change with the times, which meant artists such as Matisse and Kandinsky were producing abstract art that had emotional or evocative content, but no longer needed to look like something or someone – so called “non-objective” art.

Paul Klee, Draughtsman at the Window

So, in what way is Fugue in Red musical!? In music, a fugue is the weaving of two main themes, a style of music that reached its heights through the compositions of Johannes Sebastian Bach; Klee even composed a piece of art entitled Im Bach’schen Stil or In the Style of Bach. Fugue is a very busy style of music where it is difficult to focus on any single aspect of the music, which can also be said about Klee’s painting. If one focuses on a singular shape, then the eye is drawn along the visual echoes that disappear to the left, where one encounters the next shape.

The first bold shape is the strike of the note and the repeats are the degradation of the sound as it echoes and passes into the past: when we talk about painting in this way, we are discussing temporality in “static” art. The once “still” art form of painting is now performing an act that would normally only be associated with music or the reading of a story, it is now based in time.

Draughtsmen at the Window (1909), is another of Klee’s paintings where he tackles the issue of passing time referred to as temporality. This painting is monochromatic, that is, it is painted using just black on white. Klee applies an outline of black shapes that then dry and become lighter as a consequence.

Therefore, the areas of his painting that are darker have dried and then been reapplied, often many times over, building the deepness of the shades. Klee’s method of applying the paint to the canvass in this manner is an early example of him embodying passing time in his paintings, an idea he is still addressing twelve years later in Fugue in red.

A fascinating technique that Klee uses is his characteristic ‘taking the line for a walk’ technique, as described by English composer Harrison Birtwistle. Birtwistle is one of a number of 20th century composers who were influenced by the unusual techniques he used, creating pieces such as The Twittering Machine (1922) or Senecio (1922). The piece is created from a single line that starts at one side of the page and remains continuous across, up and down the picture, never losing contact with the canvass.

Birtwistle emulates this in his own music by taking a musical line, the melody or an ostinato, drawing it continuously from one end of the piece to the end; the other instrumental parts respond and adjust to this just as the colours and sections in the painting do.

Once again Klee is applying his musical style to embody temporality into the make up of the painting. Where so often one finds connections between the art forms such as music and painting, Klee finds the means to embody musical rules in the construction of his paintings, helping to evolve the very nature of the art form.

Swiss/German painter Klee is considered one of the most important painters of the Modernist period (1880-1950), as an artist who understands the new position of painting in an age of incredible change.

Klee was one of the latter members of the Bleu Reiter group made up of Modernist artists such as Macke and Kandinsky. He was also a key member of the German Bauhaus Art College and movement, with their vastly influential and recognisable style of design using academic and scientific approaches to new and original art, in an age that was uncertain but artistically fruitful nevertheless.