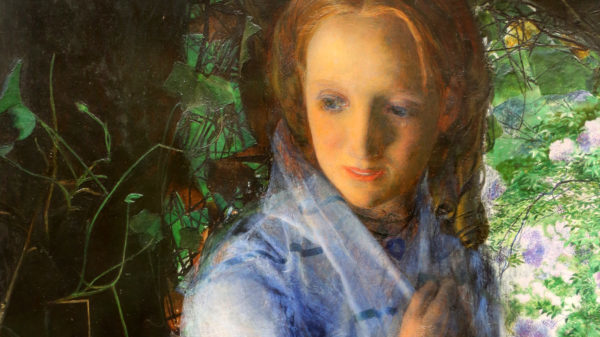 We consider April Love, made by Arthur Hughes (1832-1915) a Pre-Raphaelite painting. Though, the artist never actually joined the Pre-Raphaelite Brotherhood, as he was only 16 when it was born. On the other hand, he met and shared ideals and values with its most important members and that's why we associate him with them. (If you want to see some Pre-Raphaelites' artworks click here!)

The title of the painting itself, April Love, shows its essence and meaning. Even if you didn't know anything about Pre-Raphaelites and their works it would still be clear that what Hughes wanted to represent was one thing: love. But, here we are not just talking about the great feeling that a person feels for someone else; the engine of this painting is also the love that the painter felt for poetry and for symbolism, themes dear to every Pre-Raphaelite artist.

April Love was first exhibited at the Royal Academy of Arts in 1856, and it was accompanied by an extract from Tennyson's poem The Miller's Daughter, published in 1842:

"Love is hurt with jar and fret,
Love is made a vague regret,
Eyes with idle tears are set,
Idle habit links us yet;
What is Love? For we forget.
Ah no, no."

Hughes didn't want to draw an illustration to the poem; he wanted the extract to give the painting more meaning. And this is the reason why he decided to make some changes. For example; he modified the setting that in the poem was a millstream with chestnut trees and forget-me-nots.

The end of a love

The artwork depicts a young lady in a purple dress and her lover, hidden in the shadows. We instantly notice the contrast between the bright colors of the girl's clothes and the darkness that doesn't let us see the man in a clear way. They are meeting in secret as they are hiding under an ivy-covered arbor that seems to be long-forgotten.

Many clues make us understand that this is likely their last meeting: the opposition between the lively lilacs, that symbolize young love, and the dried rose petals on the floor that represent the end of love and death. Also, if we look closer we see that the man is holding a withered rose, which can be seen as the lady's lost virginity. But, what leaves no doubt about the breakup is the girl's face. Her eyes are full of tears as she looks away from her lover.

John Ruskin, the leading art critic of that time, immediately understood the power of the painting and described it with lovely words:

"Exquisite in every way; lovely in colour, most subtle in the quivering expression of the lips, and sweetness of the tender face, shaken, like a leaf by winds upon its dew, and hesitating back into peace."

However, even though the painting tells a tale of young love and its inevitable end, there is another hidden story told by the soft, yet vivid colors: the look on the girl's face and her body language, the dreamy and melancholy atmosphere—elements that proclaim the overwhelming tenderness and uniqueness of this love.

It is quite odd that Hughes decided to use as a model his wife Tryphena Foord for a painting that depicts the end of love, as he described her as his "early and only love." He also used Tryphena for many of his works, and in most of them she seems melancholic and unhappy.

Were the couple having trouble? Actually, they couldn't have been happier: they were just married, and later, they had six children and remained married for the rest of their lives. Certainly, they were luckier than any other Pre-Raphaelite couple; let's just think about the hard and complicated relationship between Dante Gabriel Rossetti and Elizabeth Siddal (the famous Millais' Ophelia).

If you want to know more about Rossetti and his complex relationships read Women in Rossetti’s Life and Art, and you'll see how much Tryphena and Arthur were lucky to find each other!