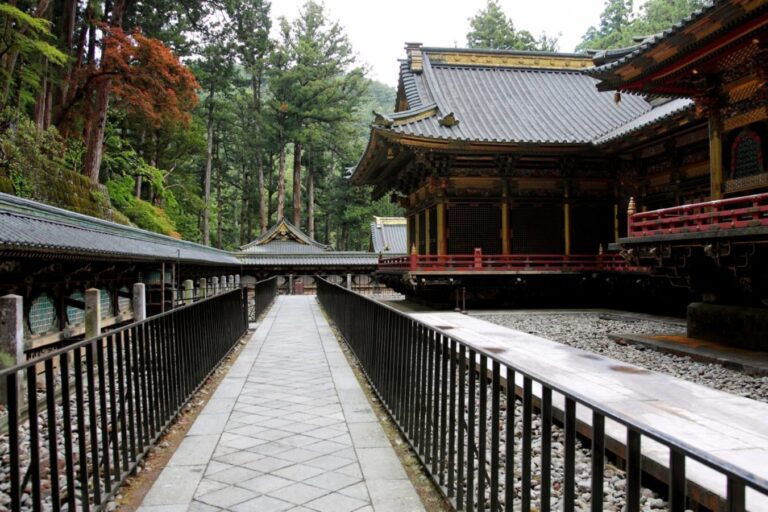 Among one of the most scenic areas of Japan, in the middle of the Honshu island, and at the foot of the Mt. Nantai volcano, lies the small city of Nikko. Besides the beautiful surroundings, it is known for numerous historical monuments. The most magnificent ones form the UNESCO World Heritage Site: the Nikko Toshogu Shrines complex.

The complex consists of three adjacent sites located in the cedar forest on the mountain slopes: a Buddhist Rinno-ji temple and two Shinto shrines, Futurasan and Toshogu. Most of these wooden buildings, as seen in the present form, are dated back to the 16th and 17th centuries. This article will concentrate on Nikko Toshogu, which is the most richly decorated architectural wonder of Japan and contains many objects classified as national treasures.

Memorial of the Great Shogun

At the beginning of the 17th century, the Edo Period began, marking the point when Japan, previously partitioned for centuries, became united under the rule of shogun Tokugawa Ieyasu (1543-1616). The country grew stronger both economically and culturally. Peaceful times brought a rise of interest in arts and culture throughout society.

Ieyasu had been buried and enshrined by his descendants in a newly built Toshogu Shrine, and is venerated here as the Great Deity of the East Shining Light. Tokugawa Iemitsu, a grandson of Ieyasu, conducted a large-scale expansion and rebuilding of the shrine complex, engaging first-grade master artists of the time to cover the buildings with an astonishing number of colored wooden carvings.

The most spectacular structures of Nikko Toshogu are two gates leading to the internal parts of the shrine. The first is the Yomeimon gate, also called the “Gate of the Setting Sun” – implying that one would gaze at it until overtaken by twilight. It is covered with over 500 carvings portraying dragons, wise men and traditional anecdotes.

The inner gate leading to the main worship hall is called Karamon, a Chinese Gate. It is color consistent with Yomeimon, combining white and black with lavish gold plating, but decorated in a different style with strong Chinese references. Black dragons can be seen around the door and on top of the gorgeous roof.

One example of the most memorable carvings decorates the gable of one of three Sacred Storehouses located in front of the actual shrine. A pair of black and white elephants, sculpted by Kano Tanyu, is somewhat bizarre: they are covered with dense hair, with horn-like ears and long tails. Depictions of animals in Japanese art were often very stylized, but in this case, they were carved based only on verbal descriptions. The artist had never seen a real elephant.

Another interesting carving adorns a more modest building of the Sacred Stable. This plain wooden building has a frieze made of several panels with monkeys. The most famous one embodies the Japanese maxim, “See no evil, hear no evil, speak no evil”. It is a curious play on words because the names of monkeys are Mizaru, Kikazaru, and Iwazaru, which sound exactly like this proverb. The ending “-zaru” is similar to the Japanese word for monkey.

The maxim was probably inspired by the teachings of Confucius, compelling people to remain moral and avoid spreading evil by dwelling on it. In other words, don’t look at, listen to or talk about things that are immoral and lead to evil. Originating from Nikko, this symbolic picture of three monkeys is widespread in Asian cultures and has also become very popular in the Western world. However, it is often interpreted differently as a symbol of ignorance or a quiet consent to evil – an interesting example of cultural differences.

The corridor leading to the Ieyasu’s tomb houses Nemurineko, a carving of the Sleeping Cat surrounded by peonies. Despite its small size and modest appearance, this piece of art is a national treasure widely recognized in Japan. Its importance lies in a new approach undertaken by legendary artist Hidari Jingoro (also the author of the Three Wise Monkeys), whose goal was to create a lifelike depiction of the cat, contrary to a common trend of deeply stylized animals. This approach led Japanese animal sculpturing in a new direction.

The cat is regarded as a symbol of Nikko (which means “sunlight”), but together with a carving of sparrows on the exact opposite side of the doorway, it symbolizes the beginning of a peaceful world – suggested by the coexistence of two beings that are usually natural enemies. The allegory becomes even stronger when you consider its location: the mausoleum of a great leader who ended the era of civil wars.

The inner shrine and mausoleum are built in striking contrast to the extravagant architecture seen before: simple and muted, seemingly dominated by an old forest. A large urn holding the ashes of the shogun is guarded by copper statues of a crane and lion. Visitors have to climb more than 200 steps of the stone stairs to reach this hidden place and contemplate it in complete silence. This makes it a perfect culmination of a visit to Nikko Tosho-gu.

Piotr Michalec – Aerospace engineer, amateur astronomer, but also an enthusiast of art and history, based in Warsaw.