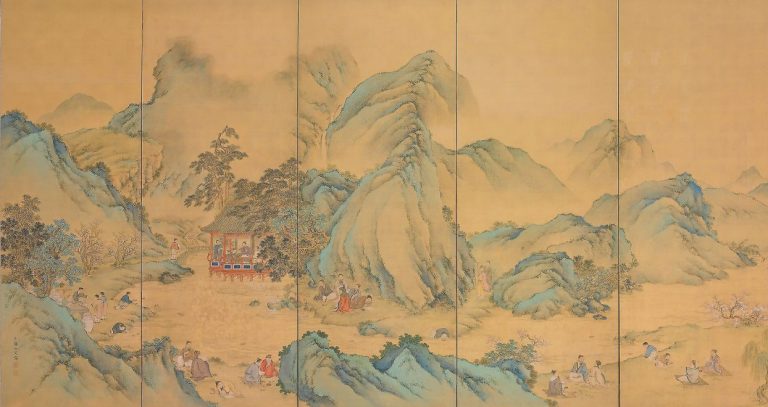 Nōguchi Shōhin (野口 小蘋) (1847–1917) was a leading Japanese painter from the Edo (1603–1867) and Meiji eras (1868–1912). She was born in Osaka to a doctor’s family and began to study painting whilst very young. At the age of 16, after her father’s death, Shōhin began to support herself and her mother. Her talent quickly drew the attention of patrons, poets, and intellectuals. Her success was helped by the new exhibition system in Tokyo.

Noguchi Shōhin was a leading female artist of Nan-ga which literally means “southern painting” because it comes from the southern Song dynasty in China. In this style, artists borrow and exaggerate elements of Chinese “literati” painting (Bunjin-ga) in composition and brushwork.

The Rhythm of Nature

Literati paintings focus on expressing the rhythm of nature, rather than realism. In Summer Mountains, Clear Autumn Weather, you can see the rush of the waterfall and the steep mountains, with the scholar studying in the central pavilion. Broad, wet strokes, with layers to define the forms, create the fauna of this imaginary Chinese landscape.

Another element of Nan-ga is the frequent inclusion of poetry or inscriptions. The poem at the top left of Mountains in Autumn reads:

A waterfall flows in amongst the trees and gushes forth again,
The cliffs and rocks have a lingering purity.
With maple leaves as vivid as brocade,
The autumn mountains return to their bright lustre.

Shōhin taught at the Peeress’ School, became a very distinguished artist with many commissions from the royal family, and even taught art to its female members. She became extremely famous. In 1893 she exhibited a prize-winning landscape in Chicago’s World’s Columbian Exhibition and was the first ever female artist to become a Teishitsu Gigei-in (imperial household artist) in 1904.

On these screens, Shōhin is depicting the scene of the Spring Purification Festival in 353 CE when Wang Xizhi and their scholarly friends gather at the Orchid Pavilion in Zhejiang province, China, for a festival of poetry and music. You can see how cups of rice wine are floating on lotus leaves down the stream for guests to enjoy. On the reverse side, there is an image of geese and reeds in silver. This juxtaposes with the golden springtime scene on the front, the same way as the informal style of the reverse complements the formal style on the front.