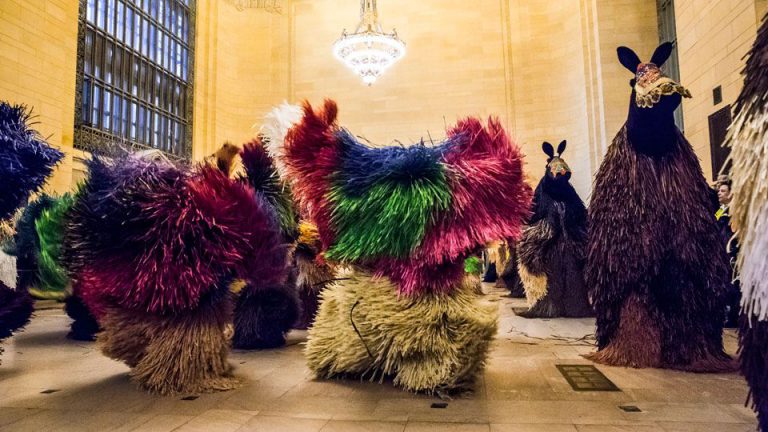 Nick Cave (b. 1959) is a multi-disciplinary, contemporary, African American artist based in Chicago. Cave is a sculptor, dancer, and performance artist, as well as an educator and a visionary. He also creates videos and installations. Cave’s work addresses issues surrounding race, identity, gender, social injustice, and gun violence. He is most widely acclaimed for his Soundsuits; eccentric, fantastical sculptures that dazzle the senses and push the traditional boundaries of sculpture. Cave’s work extends far beyond the studio to include the classroom and to engage communities, bringing people together to celebrate what it means to be human.

Cave made the first Soundsuit in 1992 in response to the beating of Rodney King by Los Angeles Police in 1991. This event left Cave feeling vulnerable that his identity as a black male living in America was threatened by discrimination and racism. Even though this was not the first documented, brutal attack of a black man by police, it resonated loudly with Cave. Hence he felt compelled to combat psychological trauma with a visual form of activism.

Cave conceived of the idea for the Soundsuit while sitting in a park one day. He noticed twigs laying around and thought about how they were discarded objects. He connected them with the feeling of what it means to be discarded, forgotten. Cave collected the twigs and brought them back to his studio where he made a life-size sculpture. Not only did the sculpture stand as a powerful visual on its own, he quickly discovered that it made a rustling sound when worn. When he activated the suit by moving around in it, the sculpture transformed into a multi-sensory delight.

Cave’s Soundsuits are wearable art, composed of miscellaneous materials: textiles, buttons, beads, sequins, dyed human hair, feathers and many other found objects he collects from flea markets, antique malls, and thrift shops. They are extremely ornate, tactile sculptures that vigorously ignite the imagination. Their design conjures imagery of African ceremonial costumes or shamans. As a result they emote a primitive feel with a contemporary edge.

The Soundsuits enable the wearer to remain unidentified and act as a sort of protective shield that frees them of labels or prejudices. The Soundsuits are crafted by hand and Cave now has the help of several studio assistants. He often works with choreographers and dancers to create performances that transform the sculptures into active creatures, taking on a life of their own. To this day, Cave has made over 500 Soundsuits and they continue to evolve, entertain, and empower.

Over the years, Cave has expanded his role as an artist to include art educator. He has taught professionally at the School of the Art Institute of Chicago since 1989 and is currently the head of the Fashion Department. His teaching often extends beyond the institution as well. He has worked with local communities around Chicago including high school students, giving them the opportunity to wear his Soundsuits and have a truly immersive experience.

Cave has traveled extensively to different cities around the U.S. to teach workshops and give lectures that bring together people from diverse backgrounds. Cave also collaborates with communities to create performances with critical messages that raise awareness about racial inequalities and gender issues. He has worked with an LGBTQ youth shelter in Detroit and with people affected by HIV and AIDS. Cave's enthusiasm and optimism for sharing knowledge to advocate change through art making is an incredibly powerful approach that works.

Another notable installation was Until which was first exhibited in 2016 at MASS MoCA in North Adams, Massachusetts, USA. Until addressed the killings of Micheal Brown, Eric Garner, Sandra Bland, Freddie Gray, and Trayvon Martin- all victims of gun violence. The title of this project arose from the all too often neglected phrase ‘’innocent until proven guilty.'' The multi-layered installation consisted of a dense, multi-colored, kinetic forest made up of 16,000 metallic spinners with images of guns, bullets, and tears suspended from the ceiling. There was also Crystal Cloudscape, a massive cloud composed of extravagant chandeliers and thousands of individual crystals topped with a canopy of various found objects. Cave’s installations are sensory, provocative worlds that mesmerize and inspire hope.

"Facility is a philosophy. It believes that art and design can create peace, build power and change the world."

Although Cave’s multidimensional work is constantly shifting in new directions, it always remains optimistic and continues to socially engage viewers. Cave is an artist committed to finding positive ways to bring people together. His work inspires and encourages us to embrace diversity by finding ways to work together to create change and to achieve our dreams.