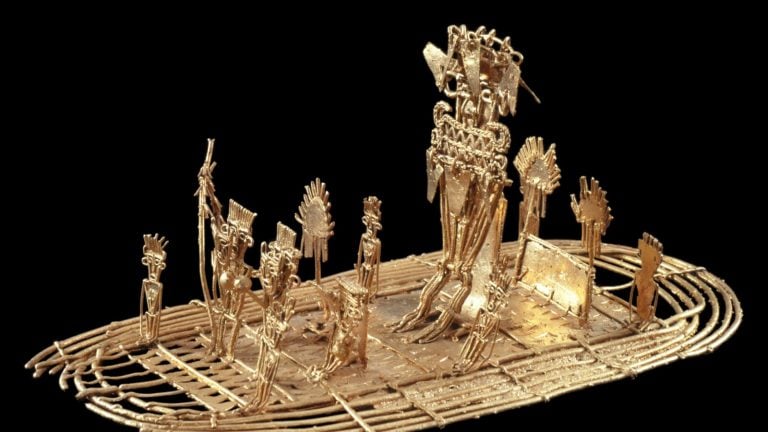 The Muisca Raft is a masterpiece of Pre-Columbian art. It was created by the Muisca people who lived in a region of today’s Colombia. Muisca Raft is a testimony to the artistic legacy of this little-known South American culture.

The 16th century was the Age of Discovery in European history. It was a time of discovering new lands and gaining new riches. However, these “new” lands and riches were owned by the Indigenous peoples of the Americas. The 16th century was a time of great disruption, destruction, and death for Pre-Columbian societies at the hands of Spanish conquistadors. One South American society affected by the conquistadors’ thirst for gold and the myth of El Dorado was the Muisca. They lived in the area surrounding modern Bogotá, Colombia. Not much survives from the Muisca era, but the precious Muisca Raft attests to their sophisticated society.

The sculpture features ten figures on a bamboo raft. The central and largest figure is a chief. He is surrounded by two medium-sized priests in the front, and then seven small attendants throughout. The diminishing sizes highlight the social hierarchy of the figures. The chief is the largest and therefore the most important. He is easily twice the height of the priests and three times the height of the attendants. The chief wears dangling adornments on his headdress and a huge nose ring.

At the bow of the raft are two priests. They hold jaguar masks in front of their faces with their left hands. The left priest holds a large staff in his right hand. The right priest holds a poporo in his right hand. A poporo is a lidded jar filled with lime that is created from crushed and burnt seashells. The lime was consumed with coca leaves during religious and political ceremonies. Therefore, the attributes of the masks, staff, and poporo signify the priests’ social importance on the raft and in the impending ceremony.

Muisca Raft depicts a ceremony performed by the Muisca people that fueled the legend of El Dorado and the Spanish conquistadors’ greed for gold. The Muisca had a sacred body of water, Lake Guatavita, where golden objects were ritualistically thrown into. Many items including small statues, pectorals, crowns, and jewelry were lovingly released into Lake Guatavita’s water as sacrificial offerings to different Muisca gods and goddesses. To the Spanish conquistadors, the easy disposal of gold was proof that large amounts of more gold were held by the Muisca tribes. Little did they know that the area of the Muisca was not gold-producing, and the Muisca did not have large caches of gold. They had an economy built on salt which they traded with neighboring tribes. Muisca territory was not El Dorado (The Golden) but El Salado (The Salty).

What is phenomenal about the Muisca Raft is its technical expertise. The entire sculpture, with its ten figures and raft, was cast in a single pour. There is not a single weld joint in the composition! A modern craftsperson would create many separate pieces and then weld them together. Not the Muisca craftsperson! He or she created a complete sculpture in wax with all its intricate details. Then the wax sculpture was carefully enshrined in clay with an opening. The clay was heated, the wax was melted and poured out, and then liquid gold was poured into the mold. The gold was allowed to cool and solidify to form the golden sculpture.

The craftsperson had only one attempt with the mold because the clay mold had to be broken to release the hidden golden sculpture inside. One false move and the mold and possibly the sculpture was ruined! The skill needed to make such an intricate sculpture with the lost wax technique is beyond almost believing. Remember, this sculpture was created before electricity, and before commercially-available products such as artist’s clay and wax. Simply impressive!

This glorious artwork only survived because it was hidden in a small cave along a path between the towns of El Retiro and Lázaro Fonte in the countryside of Colombia. Very few golden items survive from the Muisca because they were melted for bulk gold to ship home by the thieving Spanish conquistadors. It was only in 1969 that the artwork came to light through Cruz María Dimaté, a local peasant, bringing it to the attention of Father Jaime Hincapié Santamaría, the local priest. Father Jaime immediately notified the Colombian government who acquired it for the Banco de la República (Central Bank of Colombia) to join the Museo del Oro (Museum of Gold).

The golden object became so famous and valued by the Colombian people that it quickly became a national emblem of their native heritage and soon graced the designs of Colombian banknotes. How do you think the 16th century Spanish conquistadors would react if they knew they had missed some Muisca gold, and it later became an icon for modern paper money? The irony is as priceless as the Muisca Raft.