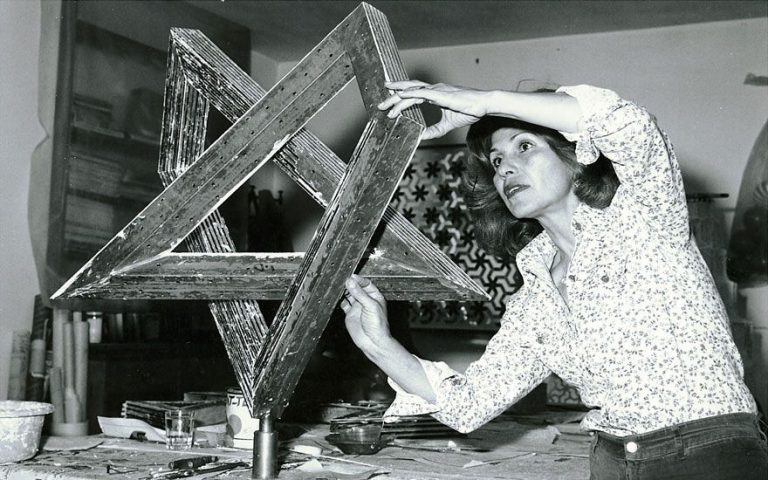 Farmanfarmaian was born on December 16, 1922 in the ancient Persian city of Qazvin, Iran. Her mother, Fatemeh, came from Ottoman aristocracy and her father, Bagher, a Parliament official, supported their daughter’s creative passions. During childhood, Farmanfarmaian developed many artistic skills that included private drawing lessons.

These fundamental skills would later serve as the foundation for her mirror mosaics. In 1932, the family moved to Tehran. She began her professional art studies during her teenage years when she attended the University of Tehran.

Farmanfarmaian longed to study in Paris, but her plans were crushed by the start of World War II. Determined to study art abroad, Farmanfarmaian boarded a steamship in 1944 and made the long journey to New York via India to Los Angeles and arrived in New York three months later. She studied at Cornell University, followed by Parsons New School of Design, where she studied fashion illustration and graduated in 1949.

Farmanfarmaian and her family just happened to be on a short trip in New York when the Islamic Revolution erupted in 1979. As a result, she remained in New York, where she lived a decade in exile, unable to return to her homeland. During that time, in Iran, Farmanfarmaian’s personal art works, collected friend’s art works, and her Persian folk art collection were seized, sold or destroyed.

While in exile, she became interested in the New York avant-garde scene, became acquainted with the notorious 8th Street Club where she met and befriended many artists who later rose to fame including Joan Mitchell, Jackson Pollock, Louise Nevelson, and Willem de Kooning, among many others. Homesick, she made a series of collage works she called, Heartache Boxes. These nostalgic objects composed of memory materials included photographs, fabrics and other family heirlooms that paid homage to her native land that she dearly missed.

A pivotal shift that forever altered her creative path occurred after Farmanfarmaian visited the Shah Cheragh Mosque in Shiraz during a 1966 visit back to Iran with friends. This stunning, funerary shrine and mosque with its luminous interior composed of thousands of glass mosaic shards that sparkle, reflect light and living shadows, deeply inspired Farmanfarmaian to create her mirror mosaics. Her experience at the mosque left an everlasting impression upon her being and her work.

The very space seemed on fire, the lamps blazing in hundreds of thousands of reflections. I imagined myself standing inside a many-faceted diamond and looking out at the sun.

Farmanfarmaian became fascinated with the traditional, decorative technique, ayeneh kari, mosaics made with mirrored glass fragments embedded into a plaster surface. She began to experiment with mirror mosaics on her own and later worked closely with Hajj Ostad Mohammed Navid, a master craftsman, who had extensive skills working with glass, mirrors, and plaster. In 1969, she made her first mirror mosaic sculptures. The hexagon became her base shape and she began to mix patterns to create her abstract forms. These intersecting abstractions were activated by light, shadow, reflections, and movements. The mirror mosaics transmitted the energy of others through their tessellated trajectories.

Well into her 80s, Farmanfarmaian permanently returned to Tehran in 2004 where she reopened a studio and continued to create her mirror mosaics, including experiments with kinetic sculptures. After many years of lacking the necessary materials and expertise of artisans to help bring her mirror mosaics to life, she was finally able to make some of her long-awaited pieces with the help of old and new employees. An intimate documentary film about her life and work, Monir directed by Bahman Kiarostami was released in 2014. In her early 90s, Farmanfarmaian had her first U.S. solo exhibition, a retrospective of her works from 1974-2014 at the Solomon R. Guggenheim Museum in New York.

Farmanfarmaian lived a deeply creative life full of endless exploration of materials and her personal heritage. She found a way to bridge two very different cultures through her art. Her resplendent mirror mosaics open a passage that connects our outer and inner worlds. Farmanfarmaian’s heart has always been with her motherland, her greatest inspiration, and this love radiates in every fiber of her work.