Painting of the Week – The Merode Altarpiece by Robert Campin 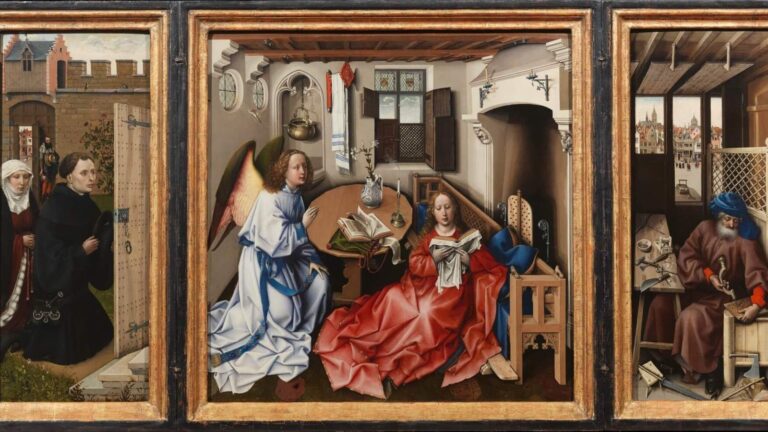 Today’s painting of the week is the Merode Altarpiece by the workshop of Robert Campin, c. 1427-32. This work is a triptych (three-panel painting) depicting the Annunciation, Saint Joseph, and two donors.

The Annunciation, when the Angel Gabriel appeared to the Virgin Mary to tell her she has been chosen by God to be the mother of His child, was a common theme in medieval and Renaissance art. However, this depiction is special. It takes place inside a well-to-do home instead of a religious space, is highly detailed, and is full of clever symbolism. Here are just a few examples of that symbolism: The vase of lilies on the table next to the Virgin Mary symbolize her purity. The fact that there are three lilies may refer to the Trinity. If you look near the two round windows, you’ll see a little flying cross with a tiny person holding onto it. That figure represents the Holy Spirit coming to Mary. It’s usually shown as a dove in similar scenes, so this is a unique twist. Not all of the symbolism is clear. People still debate the meaning of the snuffed-out candle on the table next to Mary.

The scene on the right-hand side of the altarpiece shows Saint Joseph (Mary’s husband) at work in his carpenter’s shop. He’s making mousetraps. There’s one on his work table and another on his windowsill. Many people think this refers to a line written by Saint Augustine that compares the coming of Christ to setting a mousetrap for the Devil.

The donors of the Merode Altarpiece appear in the left panel. Based on the coats of arms shown in the windows of the middle panel, scholars have identified them as the Ingelbrecht family. The name Merode comes from a later owner. The wife was probably added later, which explains why she’s so cramped into the side of the frame. In the 15th-century Netherlands, the growing middle class began spending money to commission artwork. The Ingelbrechts probably fit into that category. Their altarpiece is much too small for a church altar; it was likely used in their home instead.

The artist, Robert Campin, ran a successful workshop in the city of Tournai, Belgium. Like many other Northern European painters of his era, he worked in oil paint, instead of the tempera that had been most popular during the Middle Ages. Oil paint made many of the Merode Altarpiece’s most notable features possible – its luminous colors, smooth surface, light and shadow, details, and sophisticated modelling of the forms. While it still has some clear medieval elements, you can think of the Merode Altarpiece as an ancestor of the Renaissance paintings that used oil paint to such spectacular effect.