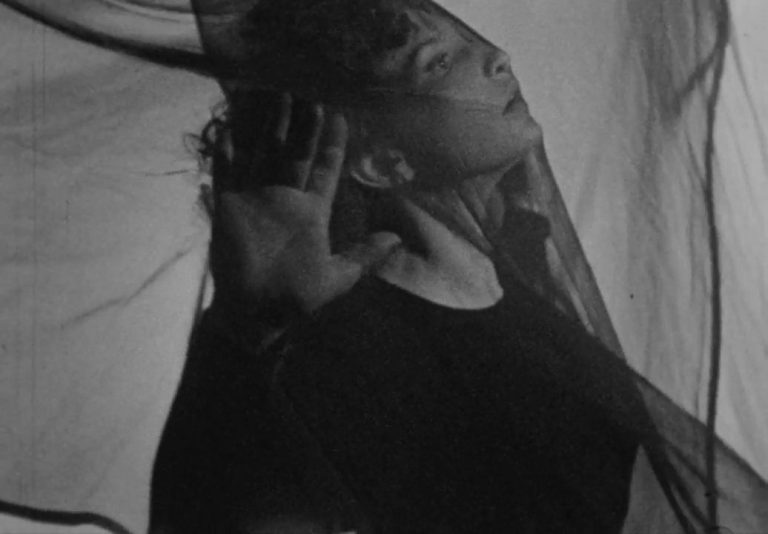 Maya Deren, still from A Study in Choreography for Camera, 1945, The Museum of Modern Art, New York, USA. Pinterest.

Maya Deren (1917-1961) was an experimental filmmaker hailed as a leading pioneer of avant-garde cinema. She was also a writer, poet, photographer, ethnographer and dancer. Her poetic and surreal, 16 mm films layered dreams and realities together with sensations that transcend through space and time. With film, Deren was able to capture and release movements of the human body by staggering layers of consciousness, applying emotive gestures and abstract textures.

Maya Deren was born Elenora Derenkowksa on April 29, 1917 in Kiev, Ukraine, the year of the Russian Revolution. Her family immigrated to the United States when she was five and settled in Syracuse, New York. Long before Maya began to explore the medium of film, she pursued her desire to write. Maya studied writing abroad in Geneva, Switzerland at the League of Nation’s International School. After four years, she returned to Syracuse to study journalism at Syracuse University. Along with being a student, Deren was also active in the Socialist Movement when she met her first husband, fellow student, Gregory Bardacke.

Deren continued her studies at the New York University where she graduated in 1936. Following graduation, she and Bardacke divorced and Maya went on to Smith College in Northampton, Massachusetts, where she received an MA in literature in 1939. She became interested in modern dance and worked as a secretary for choreographer Katherine Dunham whom she toured with across America.

After two years of working with Dunham, they parted ways. While living in Los Angeles with her mother, Deren met Czech photographer, Alexander Hackenschmeid a.k.a Sasha Hammid. They married in 1942, moved to New York City and settled in Greenwich Village. Maya and Sasha collaborated on film work, but eventually the two divorced. Film became her primary medium and Deren dove deeper into making experimental films. In 1952, she met her third husband, Teiji Ito, a young, Japanese musician. She became his mentor and eventually they started to live together. Despite the eighteen years age difference, the two married in a ceremony at sea in 1960.

Maya Deren was a determined and resourceful artist with a D.I.Y. (do it yourself) attitude. She wrote, produced, acted in, publicized and distributed her own films. Having experienced her own struggles as an independent experimental filmmaker trying to find distribution for her work, the artist started a distribution business out of her home and eventually established the Creative Film Foundation to provide support to experimental filmmakers by offering money and cash awards. She was a daring experimentalist who used several camera techniques: slow motion, multiple exposures, superimposition and jump cutting to push the boundaries of film. Her work was continually evolving as she collaborated with camera woman, Hella Heyman, and dancers and actors. Deren toured with her films, gave lectures on film aesthetics and workshops.

In 1943, at the age of 26, Deren made her most widely acclaimed film, Meshes of the Afternoon together with her collaborator and husband, Sasha Hammid. Meshes was well received and Deren continued to experiment with film, exploring her interest in dance. All of her films were short in length and often silent. Other films that followed include Witch’s Cradle (unfinished and featured Marcel Duchamp, 1944) At Land (1944) A Study In Choreography for Camera (1945) and Ritual in Transfigured Time (1946).

In 1946, Maya received a Guggenheim Fellowship Grant with the intention to travel to Haiti and photograph Haitian dance. Deeply inspired by the Voodoo tribal rituals, dance and music, she stayed for eighteen months completely absorbed by the rhythmic magic of the culture that ultimately inspired a new body of work using film.

Between 1947-1955, Deren returned to Haiti four times to film Voodoo rites, rituals and ceremonies recording hundreds of rolls of footage, but the film was never completed. Years later, the film, Divine Horsemen: The Living Gods of Haiti was edited by Teiji Ito and his next wife, Cherel, a film director, and released in 1981. Deren’s other films include Meditation on Violence (1948) Dance films (1955) and The Very Eye of Night (1959). The artist won the Grand Prix for Meshes at Cannes Film Festival in 1947 and was the first female director to be honored.

Along with film, Maya Deren continued to exercise her love of writing and wrote several articles and essays for popular magazines and film journals including a self-published chapbook of her own writings, An Anagram of Ideas on Art, Form and Film published in 1946. She wrote extensively about the art and craft of film making and an excellent compilation of her writings can be found in Essential Deren: Collected Writings on Film. In this book, we can understand her views on the art of cinema, what it means to be an independent filmmaker, its rewards and challenges and a glimpse inside her own creative process. Following her journeys to Haiti, she compiled her observations and experiences into a book, Divine Horsemen: The Voodoo Gods of Haiti published in 1953 by Vanguard Press.

Deren became so enraptured by Voodoo practices and rituals during filming that she adopted the religion and was initiated as a mambo or priestess. She studied intensely the sacred mysteries of Voodoo, participated in rituals and ceremonies where she intimately experienced the power of possession, evoking gods and spirits using her own body as a vessel. The artist identified with Erzulie, goddess of the sea, of love, creativity and fantasy. Her life became illuminated and transformed by voodoo ritual practices.

On October 13th, 1961, Maya Deren died of a cerebral hemorrhage at the age of 44. Her ashes were scattered at Mount Fuji in Japan. In 1985, the American Film Institute established the Maya Deren Award for independent filmmakers. In 2001, Austrian filmmaker Martina Kudláček made a documentary film about Deren’s life and work, In the Mirror of Maya Deren, an enduring tribute to one of experimental cinema’s most profound filmmakers. Today, many of Maya Deren’s films can be watched via YouTube or other online media platforms. Her films created new realities that extend beyond the medium and resonate with her love of life.