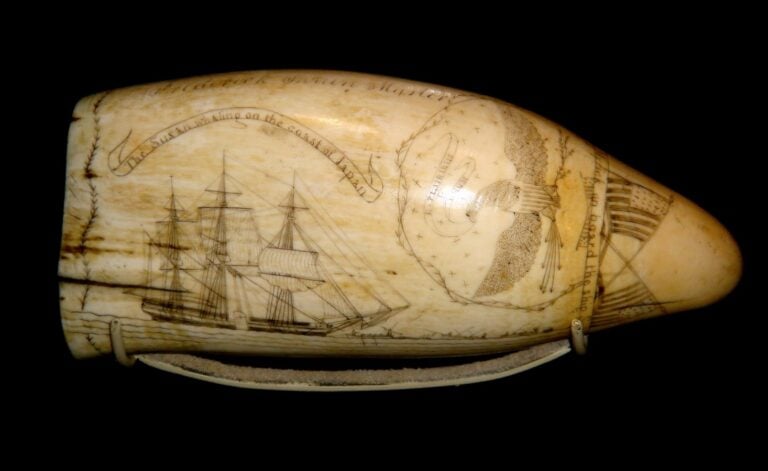 Despite the enormity of whales, those pursuing them could go weeks, even months at a time without seeing a single one. With all that time between hunts, sailors needed something to occupy their hands with.

From boredom was born the scrimshander. He is the artist who carves scrimshaw: images etched into pieces of bone, antler, or the like. This tradition, which may have early prehistoric origins, is more widely considered the one, true, American art.

“Modern” scrimshaw is recognized to have appeared around the 1820s. This coincided directly with a time in the whaling industry when more crewmen were needed to catch the whales themselves than to pilot the ships. Wages were low and time was abundant.

Often enough, a ship’s captain would gather up whale teeth – considered until the popularization of scrimshaw to be relatively worthless – and distribute them among crew members who wanted them. These and other pieces of bone would be polished with pumice and brought to a high sheen with a rag. From there, mostly using only a simple sailor’s knife, scrimshanders carved into the material with precision and care.

The coloring of scrimshaw often came from charcoal or gunpowder, two items readily available aboard a whaling ship. Rubbed into the carving, the use of a dark pigment – dependent on the varying degree of carving tools available – made for delicate renderings of value and shading.

Much whaling scrimshaw depicts ships the artists sailed on and images of those aboard – or those left at home. However, useful tools and trinkets, such as pie crimpers, lampshades, and various handles, were also fashioned from the “leftover” whale parts. These made their way back to land (as long as the sailors themselves did, too) as gifts for wives and families or items for market.

Herman Melville, in his 1857 classic Moby Dick, described the craft:

“Throughout the Pacific, and also in Nantucket [Massachusetts], and New Bedford [Massachusetts], and Sag Harbor [Long Island, NY], you will come across lively sketches of whales and whaling-scenes, graven by the fishermen themselves on sperm whale-teeth, and other like scrimshander articles, as the whalemen call the numerous little ingenious contrivances they elaborately carve…in their hours of ocean leisure.”

Though scrimshaw was gaining popularity on the high seas, the practice had already been taken up further inland. Soldiers and fur-trappers carried powder horns until muzzle-loaded firearms and the like became obsolete in the late 19th century. In their spare time, which they also had plenty of, they transformed their ordinary horns into works of art. Many feature the names of the soldiers who carried them or depictions of the battles in which they fought.

Towards the end of the 19th and into the beginning of the 20th centuries, whaling was swiftly modernized. Harpoons were fired from cannons (instead of thrown by individual sailors), and many ships became floating plants that could catch and process whales on board. Fewer crew men were needed, thus fewer scrimshanders remained.

By the time most modern nations banned whaling, scrimshaw was so rare that it almost became a lost art. However there are a handful of scrimshanders that remain today, carrying on the tradition using sustainable materials and practices. They often employ a variety of tools and colorings that allow for more elaborate carvings than the whalers of old could have dreamed of.

Like much of the folk art we see in craft shops and quaint local storefronts, scrimshaw begs the question: what could you make with spare material in your spare time?