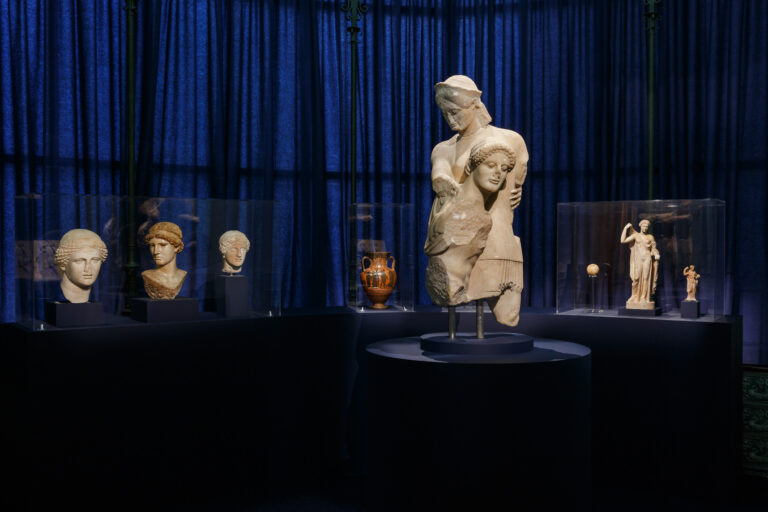 KALLOS, The Ultimate Beauty is the latest exhibition running at the Museum of Cycladic Art in Athens. It started on the 29th of September, 2021, and will be on view until the 16th of January, 2022. It presents 300 antiquities from 52 different museums, collections, and Ephorates of Antiquities from Greece, Italy, and the Vatican. The majority of the exhibits are traveling for the first time outside of their museums and collections. They all examine the concept of Kallos, which is wrongly translated in English as beauty. These beautiful objects date from the Archaic to the Hellenistic period (7th–1st BC). There are also a few from Roman times, as some of the original objects have only survived as copies. Let’s take a closer look at this beautiful exhibition and explore the meaning of true KALLOS, The Ultimate Beauty.

Kallos is more of an ideal, rather than a concept. It first appeared in epic (8th c. BC) and lyric (7th-6th c. BC) poems, in an effort to put beauty into words. After the 6th century, Kallos became an object of discussion and a point of reference for all philosophers. It was then that it obtained its full meaning. Kallos combines not only physical beauty but inner beauty as well, which translates to the virtues of the soul. The exhibition focuses on this meaning of Kallos, hence the title KALLOS, The Ultimate Beauty.

The exhibition visualizes Kallos through statues, vases, broken ceramics, mirrors,  jewelry, and objects of beautification. They come from all over Greece as a way to prove that Kallos was an ideal that existed in all Greek territories. Moreover, there are objects from the ancient Greek colonies in the West showing that this ideal was very popular almost everywhere. It is something that everyone was trying to obtain. Everyone was trying to be virtuous, have good manners, be a considerate civilian, and also keep their bodies healthy and in shape.

The exhibition has several different sections that explore different meanings of Kallos. All the sections together give an overall view of this idea that the ancient Greeks were so fond of.

It was widely believed that all beauty came from the gods, and no matter how beautiful a human was, they could never surpass them. Each god and goddess had his/her own personal characteristics; for example, Athena’s was wisdom and seriousness, Apollo’s was calmness and fairness, etc. So there are sculptures in this section that showcase the divine kallos.

On the other hand, Greek mythology talks about many hybrid and originally monstrous beings, such as Medusa, Skylla, and the Satyrs. These demons are portrayed as ugly; half-humans and half-demons. However, over time, they acquired beauty, evolving into creatures with human feelings and traits. Such exhibits are the Sphinx from Thermos and Amfipolis, and the Skylla from Ostia and Eleutherna.

Heroic beauty shows heroic acts during war or peace, that is sometimes combined with physical beauty, and actions of self-sacrifice for the common good. According to ancient Greek mythology, heroes were in a higher place than common people, and they became demi-gods quite often. The most famous example of a hero that became a demi-god is Hercules. Others are Achilles and Meleager. What is interesting is that women could also become heroines and demi-goddesses. One example is Atalante, a famous and beautiful huntress. There were also the Amazons, the female warriors, that are presented in the exhibition as well.

In this section, there are beautification objects that were used in daily life. The unit showcases objects for the whole process; taking baths, applying ointment, wearing makeup, hair styling, and jewelry,

This is one of the most fascinating sections of the KALLOS, The Ultimate Beauty exhibition. It shows young people in their prime whose lives fate decided to take away. These youths are described in the ancient Greek language as Ωραίοι (Horaioi), meaning lovely and beautiful. The term originates from the word ώρα (hora), which means hour. Those who passed away were Άωροι (Ahoroi). It means that they lost their lives before their finest hour, or their hour of prime.

In this section, there are two of the most beautiful objects of the whole exhibition: two burial stelai. One is Archaic, from Akraiphnion in Boeotia, and the other is Classical, from Kallikrateia in Chalkidiki.

There are more sections in the exhibitions, such as Archaic and Classical Beauty, Beauty Contest of Deities, Mortal Beauty, Athletic Beauty, etc. Overall, they examine the ideal of Kallos, to try and provide a complete image of what it truly was. The exhibition offers a phenomenal experience, since the whole ambience is quite enchanting and fascinating.

Are you a fan of ballet? If so, this year Art Safari in Bucharest, Romania is hosting the long-awaited show Le Tricorne: Picasso, Dalí & Falla...