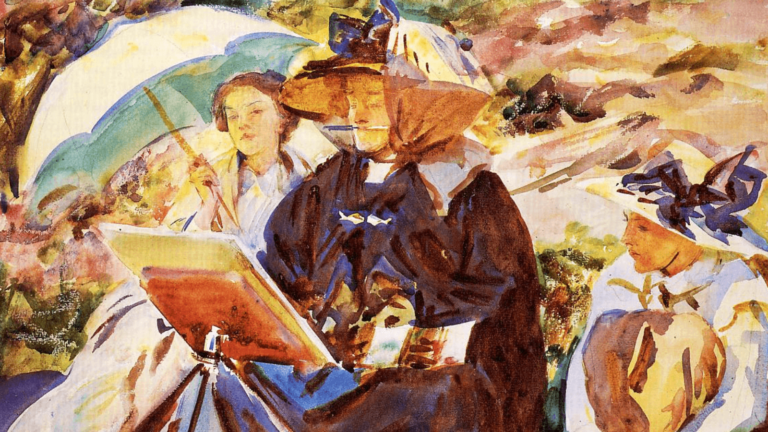 Many people know John Singer Sargent for his beautiful oil paintings of turn-of-the-century high society. However, he also made many lovely watercolors, and they’re not nearly as well known. One example of a Sargent watercolor is our painting of the week – Simplon Pass: The Lesson.

Simplon Pass: The Lesson depicts a trio of women enjoying the outdoors. Sargent’s sister Emily sits in the center, at work on a painting. Two younger girls, Sargent’s nieces Rose-Marie and Reine, watch their aunt’s work with interest. It’s a lovely summer scene, where the style of painting is as relaxed and informal as the subject matter. Sargent spent several summers in the Swiss Alps near Simplon Pass, where he painted many watercolors like this one. They show his family and friends painting, reading, sleeping, and otherwise relaxing. Many scenes feature women with beautiful light dresses and colorful parasols. He also painted the spectacular mountain scenery itself.

Sargent travelled widely and made most of his watercolors on the road. He painted Bedouins in North Africa, architecture in Venice, marble quarries in Italy, Mediterranean landscapes, elaborate gardens, and more. His watercolors are numerous, and all of them are really spectacular. I love their bright colors and spontaneous brushwork. Some are more detailed, while others look almost abstract at first glance. However, all of them seem to convey just enough information to create a compelling scene.

If you want to see more watercolors by John Singer Sargent, you should visit the Brooklyn Museum in New York and the Museum of Fine Arts in Boston, because those two museums own the biggest collections. Simplon Pass: The Lesson and the other Simplon Pass paintings reside in Boston.