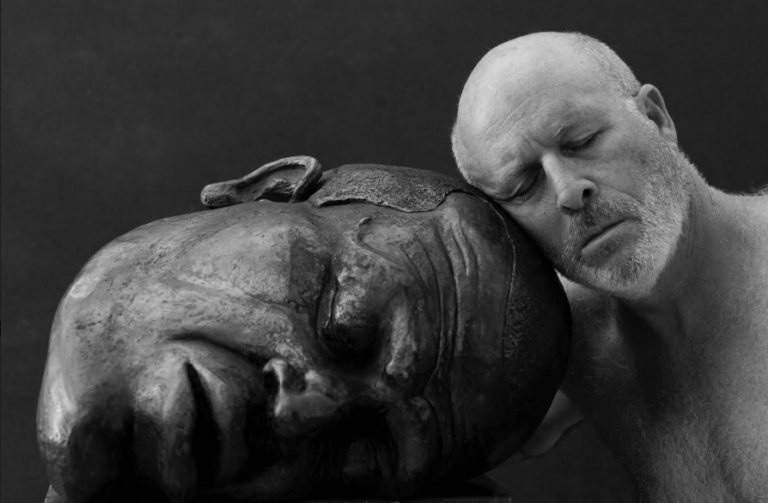 Dan Reisner is a sculpture artist living and working in Tel Aviv. He has produced multiple outdoor sculptures for urban spaces, not only in Israel but also around the world. However, it was his bronze sculpture of George Floyd that went viral after his tragic death in May 2020. DailyArt Magazine has been in contact with Dan Reisner to learn more about the sculpture and the artist himself.

Could you tell us a little bit about your background? Where did you grow up?

I grew up in a little town not far from Tel Aviv, Israel. Opposite my childhood house was a wadi, with plenty of nature, I loved to spend my time there between the massive eucalyptus trees, with many childhood friends, living to the utmost the creative world of children, including mischief and danger.

Was there something specific that you would say inspired you to become an artist? Did you study art? And if so, where?

When I’m asked I always say that I was born with a great passion for art and creativity, in the surrounding of the wadi by my home, I could find all the materials I was seeking, the wood, clay, charcoal, and many more, for me, the wadi was my first studio… after very intense and difficult army service as a combat medic in the Lebanon war, I was further convinced that I should pursue my dream and become an artist. I studied at a school called Hamidrasha and later on at Bezalel School for the Arts.

What made you choose sculpture as your primary medium?

When I was in art school, I mainly painted. At some stage, in my second year, I had an artistic block, I decided that I will sculpt for a while… that was a revelation. I love sculpture, I have a deep connection to materials and their concrete tactile part in defining our world.

As soon as the death of George Floyd was reported in May 2020, did you know that you wanted to create this sculpture in commemoration?

I saw this terrible video of the incident (taken by Darnella Fraiser) on the news and then on the internet, a day after it happened. It caught me with intensities that I have no words to describe. There was a very strong feeling that you are a witness to a murder that has unfolded before your eyes with no ability to respond, to save, to change the moment itself. I felt I had to do something that will emphasize the need for immediate change. The work wasn’t created from a place of commemoration, it was a deep need to express the distressed energy of this tragedy, as we saw in the demonstrations which took place all around the world.

Creating a piece like this must have been emotionally challenging and an intense experience. How did you find the process of physically creating the sculpture?

I began to work on the sculpture immediately after seeing the video, it was evening and I worked into the night. I felt the clay in my hands expressing the event with all the range of emotions it evoked in me: anger, frustration, sadness, compassion. I wanted it to be “Bigger than life”, I added more and more clay, until I got the ‘volume’ I wanted. I had the feeling of emergency, that this work must come out as soon as possible, that there is an importance in the statement. It took me a few weeks to finalise the work on the sculpture, slowly it reached the point that I was trying to grasp. The fragile moment between life and death.

As the subject is of a sensitive nature, did you feel a lot of pressure on you as the creator and how the sculpture would be perceived by the public?

My focus was not on how it will be perceived, I just had to do it. It was really a strong feeling of a commitment. Slowly I could feel the impact, people came into the studio and were touched into tears. Then once the work was out in the world on social media, it got tremendous amount of reactions and shares, the post of the work became a mirror to our times, and of America these days, people from all sides have reacted in every possible way- from saying that I, as a white person cannot portray this pain, to black people sharing feelings of being so threatened, afraid that they are on the verge of a Holocaust. Some people connected deeply to the idea of the work, saying that it has to turn into an outdoor large scale memorial, as a reminder to all.

I have read most of the things that were written and I was truly touched, I saw conversations that started from racist remarks, slowly changing to understanding and to people opening to each other, sharing their pain.

One of the most touching moments for me was when Terrence Floyd, George Floyd’s brother wrote how he appreciated the sculpture! This is a very important and special experience for me, to stand and listen to all these different comments, I tried not to focus on the pressure of being the creator of the work, to understand it’s not about me, it is about the world we are living in and the difficulties and challenges people go through.

Could you explain why you choose to depict just George Floyd’s head and in this particular position.

The video shot by Darnella Fraiser was taken from an angle that we mostly saw Floyd’s head. Our focus was on him… the rest of his body was hidden behind the police car. A head on its side is a known subject in art history, one of the most famous heads, is The Sleeping Muse by Constantine Brancusi. But here, we were not seeing sleep, we were seeing death, murder. George Floyd’s head was the focus, his pain, his suffering, his pledging for relief, touched us all in a very personal way, and this is the reason that became a pivotal moment shouting into the world that change must come.

There are tree rings at the base of the sculpture. What is the significance of these?

Time-rings in a tree symbolise its age. Each ring is a cycle of a year of growth. Here it has a symbolic idea. I created eight circles on Floyd’s neck, which corresponds with time – the eight minutes and forty-six seconds during which the terrible act took place. I also marked two lines, resembling the fracture of the tree situated as watch dials which have stopped at the hour of death.

The work becomes a capsule of the story, becomes evidence. Another significance of the circular motion are the ‘ripples’ that this event sent throughout the whole world. The speed and energy that it rippled to the other side of the world, finding me, as many others, responding, and then finding its way back as art.

You speak of art as having the power to create change in the world. The post of the sculpture spread very quickly on Facebook and reached thousands of people in a short amount of time. Do you think the sculpture has had the intended impact so far?

I believe that the deep essence of art is to inspire change, this is the ongoing energy that is passed from one generation to the other from the early days of mankind. Many times art comes out from our deep unsolved issues, asking people to take notice, to give their attention to it. Once people give their attention to an issue, their creativity seeks solutions. The more people are aware, the more inspired for change. The sculpture had a wide exposure on social media, but eventually, many people ask to see the actual sculpture. I hope to find a suitable place in the states to show the work.

You speak of the post reaching the Floyd family and their interest in the piece for the George Floyd foundation. Could you tell us a bit more about this?

As I mentioned, one of the most touching things that happened to me with this sculpture and post, was that it reached the Floyd family. This family that has endured so much pain this last year, and has done so much to inspire others and bring change.  In only a few months it will be a year to this tragic event. The family has shown interest that the work will be on exhibit at the George Floyd Foundation and are doing the most to make it happen.

Your previous works have taken on a very public role, often in urban environments. Is this where you would like to see this sculpture too?

Many of my works are in permanent outdoor environments. It is a great feeling of gratitude to do works of such a scale, and to be able to touch so many people. The question of where a work should be, and in which space, is very important, and yes, I can see this work becoming a large scale outdoor work. As Mr. Keith Miller wrote on the post…

“Great likeness, it would be best exhibited in a park or near the place that he was killed. To serve as a reminder to those people of the standards some of their neighbors live by. That we are all God’s children and no one deserves to die this way.”

There is no doubt that Dan Reisner’s sculpture has had a profound impact following the tragic death of George Floyd, having even reached the Floyd family. His work reflects the impact that art can have on the world and how it can truly inspire social change. The suffering of George Floyd inspired Resiner to produce something that would help to inflict change, and the sculpture will act as a constant reminder to bring the issue to the forefront of our attention.

You can find out more about the work of Dan Reisner and the George Floyd sculpture on Dan Reisner’s website and the Facebook post about the sculpture.