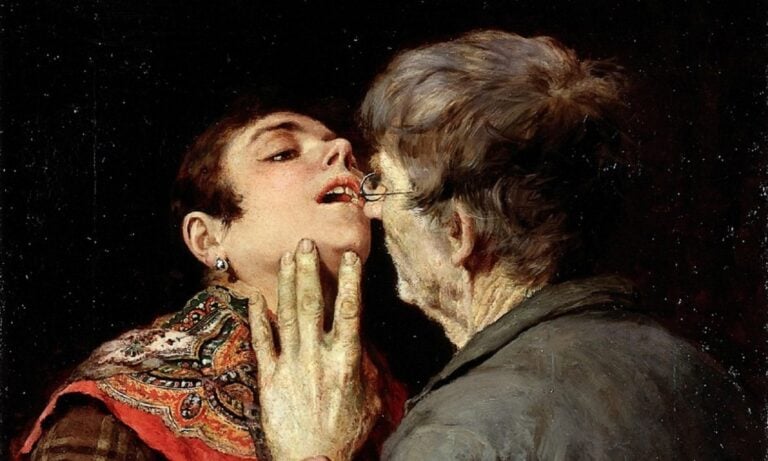 London is a great place to be for the curious and inquisitive. Public museums, galleries, and libraries are homes to a vast collection of wonderful objects that mark the history of knowledge, aesthetics, and creativity. Wellcome Collection, situated just 10 minutes from the famous Madame Tussauds in Marylebone, is the biggest museum and library in London exploring science, health, medicine, and art. One of their permanent exhibitions, Medicine Man, is dedicated to the founder of the museum, Sir Henry Wellcome, and displays a collection of paintings – a record of the history of medicine in art.

This life-size oil painting came from a set of 12. The artist accompanied it with separate paintings of dissections of the uterus and an infant.

Another artwork of medicine in art by Jacques-Fabien Gautier D’Agoty, in case you were wondering what a man is made of. Also, the artist is best known as a pioneer of three- and four-color printing.

Daniel Lambert was born the son of a Leicester gaoler in 1791. He claimed to drink only water and eat in moderation, but his size and weight increased enormously so that by the age of 36 he weighed over 50 stone (317 kg). But he’d found a great way to turn his bulk to profit by exhibiting himself all over England and charging people a shilling to see him.

A visit to a dentist is not the most desired event in anyone’s calendar and things were only worse back in the day. This is an image of a young woman who’s about to get her tooth drawn. Unlucky for her, it had to be done with dental keys. These instruments were used from the 18th century up until the 20th century as a means to extract diseased teeth with no decent antibiotics or painkillers. They often caused jaw fractures and damage to the gums. Bearing this in mind, the only way to ensure the cooperation of the patient was to conceal the instrument from them.

This painting was acquired in Stockholm, Sweden. Unfortunately, no record of the Swedish painter who created the piece was found. Therefore, it is presumed to have been done by an unknown French master.

Human beings are congenitally prone to violence – our obsession with Game of Thrones and Walking Dead says it all. But before the existence of gore films and violent video games, public executions were a popular social gathering event. And so were the surgical procedures. This painting of medicine in art shows a sham doctor, known as “Sequah”, performing on Clapham Common. Dressed in a Native American costume, he proudly displays a tooth removed from a volunteer patient. Apparently, these performances occurred all over the country in the late 19th century and the “gig” even had its own brass bands for audio effects.

Johan Josef Horemans was a leading painter of the everyday life of Antwerp’s commoners. This is a typical scene in a surgeon’s office. The man comes seeking treatment, and the surgeon takes charge of the case, while his apprentice, in the red jacket, starts the work on the manual treatment of the patient – much to the discomfort of the seated lady.

8. Ernest Board, Dioscorides Describing the Mandrake

Fans of Harry Potter must remember the scene from the second movie Harry Potter and the Chamber of Secrets when Professor Sprout pulls out a squealing mandrake from its pot during herbology class. In real life, the mandrake is a plant related to the deadly nightshade and has roots that resemble the male and female human forms. This is a painting depicting Dioscorides, a Greek botanist, physician, and pharmacologist who practiced during the 9th century, describing how the wine made from mandrake could be used as a form of anesthesia, deadening pain and inducing sleepfulness in those injured or burnt.

The Matania family from Naples were renowned for their documentary illustration in the first half of the 20th century. Cousins Fortunino and Ugo were the leading illustrators of World War I scenes for the British news magazine, Sphere, where a reproduction of this painting was printed.

This painting of medicine in art shows an 18th-century pharmacy, with customary wooden furniture and porcelain drug jars stacked to the ceiling. The artist incorporated the traditional symbols associated with a pharmacy; the mortar and pestle used by the man on the right, and the scales shown on the table to the left.

William Cheselden was an influential 18th-century English surgeon, who helped establish surgery as a respected medical discipline. Since Medieval times in northern Europe, Barber-Surgeons functioned rather like general practitioners. They dealt with practically every condition that could be seen or felt: wounds, fractures, skin complaints, and sexually transmitted diseases.

Hence why barbers in good old England still use the sign with a pole with red and white stripes: red stands for artery blood, and white for a clean bandage. Cheselden disagreed with the Barber-Surgeons’ company rules about dissection and eventually succeeded in separating the surgeons from the barbers. Here he is using dissection to teach anatomy… On his dining table.

Dr. William Price was an eccentric physician and surgeon, litigant and Druid, vegetarian, and Chartist. He was a practitioner of free love and opposed to marriage, vaccination, vivisection, law, government, and orthodox religion – basically, the earliest known hippie in England. In a way, he even looks like John Lennon. After the Chartist march on Newport in 1839, he fled to France dressed as a woman. He was best known for the introduction of cremation as a means of disposal of the dead in England and Wales, burning the body of his son Iesu Grist in 1894.