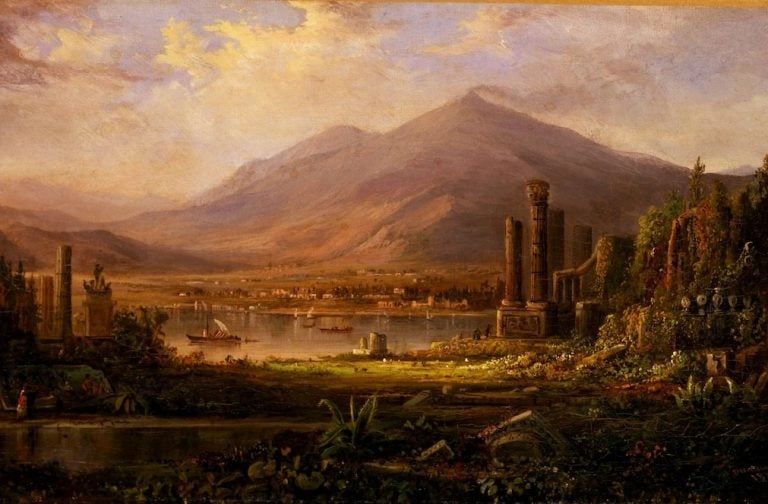 African-American landscape painter Robert S. Duncanson made headlines in January 2021. This happened when his Landscape with Rainbow was featured during the United States Presidential Inauguration of Joe Biden. It’s nice to see the long underappreciated Duncanson finally get the attention he deserves.

Robert S. Duncanson (1821-1872) was a Black man born to free parents in New York state. Details of his early life vary from source to source. But we do know that he started out as a house painter. At some point, he taught himself fine art painting by copying prints. Initially, he worked as a portrait and still-life artist. However, later on, he switched to painting in the style of the Hudson River School, for which he’s best known.

Duncanson traveled several times to Europe, where he studied the masters and painted old-world scenery. As the quote below shows, he wasn’t all that impressed! He also worked in Quebec, Canada for several years. In fact, Canada credits him with inspiring its national landscape painting movement. Yet, despite all his travels, Duncanson is most strongly associated with Cincinnati, Ohio. This artistic and abolitionist center provided him with his first patrons. In addition, it gave him access to the funding he needed to journey abroad.

My trip to Europe has to some extent enabled me to judge my own talent. Of all the landscapes I saw in Europe (and I saw thousands) I do not feel discouraged.

Although some of his paintings portray real locations in North America, Europe, and the British Isles, others depict invented scenery and idealized landscapes. And it is the romantic, idyllic qualities of Robert S. Duncanson’s landscape paintings that give them their timeless appeal. In fact, several viewers have read in them signs of hope for future peace. It seems that, despite his struggles as a Black artist in turbulent antebellum America, Duncanson imagined a better world through his work. And no painting embodies these uplifting qualities better than Landscape with Rainbow. Thus it’s easy to understand why the President and First Lady chose it for their special day.

Although most of Duncanson’s paintings are surprisingly apolitical, only a few of them address the issue of slavery. For example, his 1853 Uncle Tom and Little Eva depicts characters from Harriet Beecher Stowe’s famous abolitionist novel. Cincinnati From Covington, Kentucky, meanwhile, includes a quietly powerful image of African-American slaves in Kentucky. This state was just across the border from Duncanson’s home in free Ohio. It’s unsurprising that tiny Black figures populate some of Duncanson’s landscapes.

Where to See Duncanson’s Art

The Smithsonian American Art Museum in Washington, DC, owns a big collection of Robert S. Duncanson’s paintings. This includes Landscape with Rainbow. Museums in Ohio and Michigan are also strong in his works. In fact, the Taft Museum of Art in Cincinnati contains eight landscape murals by Duncanson. In 1850, Cincinnati art patron Nicholas Longworth, whose home is now the Taft museum building, gave Duncanson his big break. Longworth hired him to create a set of murals depicting fictional settings based on the real-life Ohio River Valley. In fact, the beauty of this area sometimes gets the credit for inspiring Duncanson’s turn to landscape painting. The Taft murals are also generally considered to be the most important pre-Civil War domestic murals anywhere in the United States.

Duncanson’s reputation declined in the years following his death hence the necessity of this recent rediscovery. However, he was certainly not an unknown artist in his time. Indeed, it’s very often said that he was the first African-American artist to achieve international success. In the United States, critics called him “the best landscape painter in the West”. Overseas, Queen Victoria and Alfred, Lord Tennyson both complimented his work. Despite his humble background as a self-taught, Black artist, he became respected, cultured, and well traveled. As a result, his inspiring successes challenge stereotypes about what was possible for African-Americans before the Civil War.