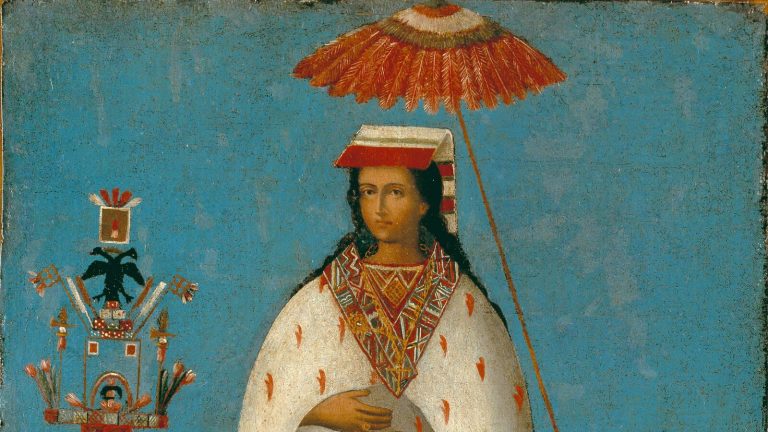 Great Princess Mama Occollo is an amazing masterpiece of South American art from the 19th century in the collection of the Denver Art Museum. It fuses the two cultures of Incan nobility and Spanish Christianity into a modern proud identity.

The great pre-Columbian Inca Empire lasted for almost 400 years from the early 13th century to 1572. At its peak, it ruled a vast South American territory comprising modern Peru, and parts of modern Ecuador, Argentina, Bolivia, and Chile. After the Spanish conquest and during the Spanish colonial period, the descendants of the Incan people still held onto their proud heritage. Many locals still wore their native costumes, practiced their crafts, and spoke Quechua.

Paintings, statues, and textiles were later commissioned during the colonial and post-colonial periods to commemorate the Incan culture. Great Princess Mama Occollo was commissioned and created for such a purpose during the prosperous Guano Era (1840-60) of independent Peru.

It is an oil painting on canvas mounted on a wooden board. It measures 18 ⅛ inches high by 14 ⅞ inches wide or 46.0 cm high by 37.8 cm wide. The painting is dominated by Great Princess Mama Occollo who stands in the middle dressed in a white tunic embroidered with colorful patterns. To her right stands a servant with dwarfism who holds a red-feathered parasol. To her left is a piece of ceremonial art which may be a headdress or an altarpiece. Below the headdress/altarpiece is a Spanish inscription. The image’s background is a solid robin’s egg blue with variations caused by weathering over the past 172 years.

Mama Occollo, spelled more commonly as “Mama Ocllo,” was the mythical co-founder of the Incan Empire in the late 12th century. She was a daughter of the Sun, and the sister-wife of King Manco Capac. She and her brother-husband established the holy capital city of Cuzco. She also allegedly taught spinning and weaving to the Incan women, and she became a patron of beautiful Incan textiles.

The unknown patron of Great Princess Mama Occollo lived during the mid-19th century, almost 300 years after the fall of the Incan Empire. However, the patron must have felt a strong affinity to its heritage to have commissioned a portrait of the Incan Queen-Goddess. Many scholars believe this posthumous painting celebrates the patron’s Incan nobility and ancestry from such an illustrious leader. Many factual historical figures have claimed lineage from mythical ancestors. Julius Caesar claimed descent from the Goddess Venus, and Cleopatra VII claimed descent from the Goddess Isis. Therefore, it is not far-fetched for a Peruvian patron to claim descent from the Queen-Goddess Mama Occollo.

Mama Occollo wears a beautiful white tunic embroidered with red and blue patterns. The banding around her neck is particularly intricate with its geometric designs and motifs. The bands repeat on her tunic’s elbows, cuffs, and ankles, adding monumental regularity to the regal outfit. Further emphasizing the noble outfit are the red feathers scattered across the fabric’s body and the red feathers of the parasol above. Red feathers were a social status symbol. Only elite people could wear and adorn themselves with such a rare and expensive item.

Within the grasp of her hand is the bloody severed head of a man. It is a frightening and unexpected detail of the painting. However, it is crucial to the painting’s understanding. The Spanish inscription found in the painting’s lower left corner explains the decapitated man.

The Great Princess Mama Occollo, gave her Virginity to the Sun. An Indian Noble descendant of Manco Licapac wanted to violate her, and how he was slaughtered by her own hands and she was the first Christian.

Translated by the author.

The patron of Great Princess Mama Occollo has therefore defined Mama Occollo as a virgin, a Christian, and a slayer. However, like the Biblical Jewish heroine of Judith who decapitates the Assyrian general Holofernes, she had justifiable cause for his murder. For her, it was in protection of her virginity vowed to the Sun. Modern lawyers would claim this death as self-defense. For Mama Occollo and the image’s patron, it was a strong message to any viewer: we may be noble female Christians, but we are not weak against our enemies.

The art piece standing to Mama Occollo’s left is a strange combination of Spanish Christian imagery and Incan polytheistic motifs. At the top is the black double-headed eagle of the European Habsburg Empire. The Spanish branch of the Habsburg Empire once ruled over the territories of what is now considered Latin America from modern Mexico southwards. The Spanish Habsburgs were a world superpower that surpassed ancient Rome in terms of land size and ruled populations. Therefore, Mama Occollo is a bridge from the nobility of the Incan legacy, through the nobility of the Spanish Habsburg ruling colonial South America, to the nobility of the patron in independent republic Peru.

Lilies on the art piece are symbols of the Virgin Mary’s purity. Lilies have been symbols of the Virgin Mary since medieval times when it entered the visual language of manuscripts, paintings, and frescos. Therefore, since the patron claims Mama Occollo vowed her virginity to the Sun, Mama Occollo is similar to the Christian Virgin Mary. She is pure, untouched, and chaste. Mama Occollo, therefore, links Incan polytheism and Spanish Christianity together, according to this painting. Whether Mama Occollo was truly the first Incan Christian remains to be debated among religious historians. However, for the purposes of the painting’s intention, this is the case presented.

Incan feathers and tassels adorn the Spanish Christian art piece, creating a transatlantic hybrid. The local culture adorns the imported ideas, making the two elements as ingredients to a new identity. Mama Occollo is not just a Spanish Christian. She is not just an Incan Queen. She is the two combined into theological and ideological harmony. The patron must have been proud of her ancestor’s pedigree.

Servants with dwarfism were very common in the European courts of the Renaissance and Baroque periods, especially in the court of the Spanish Habsburgs. Artistic confirmation can be found in the famous Las Meninas painted in 1656 by Diego Velázquez. The young Spanish Infanta is surrounded by her diminutive court servants. Smaller servants were seen as entertaining and unthreatening. Hence, Mama Occollo has her own small servant too, who holds a parasol, a symbol of nobility and delicacy, above her head. She, therefore, imitates the Spanish nobility’s fondness for little people.