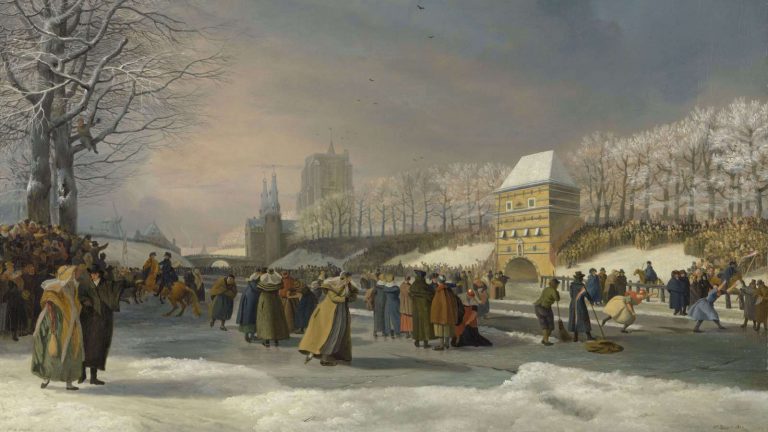 Sports Fan? You Will Love These Vintage Olympic Posters

Ice skating is a beloved winter activity and I’ve been an avid participant (all year round) since I was a little girl. As such, I really enjoy looking at ice skating in artworks from centuries past. It’s fun and strange to see how the skates, fashion, settings, and customs have changed and also to watch modern sports emerge out of historical pastimes. Come see what I mean and enjoy these ice skating artworks with me!

The Origins of Ice Skating in Artwork

Ice skating is a very ancient activity that could be as many as 5000 years old. The first ice skates found in the archaeological record consisted of animal bones attached to shoes with leather straps. Originally, skating was a form of transportation rather than a sport – an easy way to get across frozen lakes and rivers in the winter. Accordingly, cultures with lots of water and cold weather, such as the Netherlands, China, and Scotland, were early ice skating enthusiasts. The Dutch memorialized their love of skating in wintery landscape paintings for which the country is rightly famous. These scenes often show skaters traveling, socializing, and enjoying themselves on the ice.

In Adam van Breen’s Skating on the Frozen Amstel River, it seems as if the whole town has frozen over, and everyone is just having a big block party on the ice. I want to do that! Van Breen’s painting also conveys the everyday nature of skating in 17th-century Holland. It isn’t the privilege of just a few people, it’s a popular and practical winter activity available to people from all classes of society. Notice how a little boy in the foreground is pushing himself along on the ice with poles, as though he is cross-country skiing.

Hockey and Other Sliding Sports

It seems as though the men in the foreground of the painting above are playing an early form of hockey. However, there are several other sports that involve sliding a puck or ball across the ice. For example, ice and snow golf have been played for centuries, especially in Holland and Scotland. Also there’s curling, ice bowling, bandy (similar to hockey), broomball, and more. The background of this painting includes a horse pulling people across the ice in a boat, which seems like an awesome way to travel. This painting’s sepia palette perfectly captures a short midwinter’s day – cold, dark, a bit gloomy, but also beautiful.

In Nicolaas Baur’s painting, a large crowd has gathered to watch an early-19th century women’s ice skating race held in Leeuwarden, Netherlands. Speed skating is one of the three types of ice skating contested in the Winter Olympic Games, and the Dutch are sensational at it. Apparently, the event documented by Baur’s painting created a scandal because the female participants took off their cloaks mid-race and skated with bare arms. Two such contestants finish the race on the painting’s right-hand side. This subsequently caused a large enough uproar to cancel future contests. Meanwhile the snowy scenery and mass of enthusiastic spectators on the sidelines dominate this lively painting.

This hand-colored lithograph, published by American firm Currier & Ives, captures a group of skaters enjoying the ice in New York’s Central Park. Outdoor skating rinks in public parks and town squares are beloved traditions throughout the world. New York now has several. The skaters in the foreground are elegant, graceful, and in control, just one would expect of modern figure skaters; meanwhile some skaters further into the background appear to be struggling. Even a little dog gets in on the icy action in the lower right corner! Except for this furry participant, the rest of the scene looks much like any public skating rink today.

A Celebration on Ice

William Notman’s Skating Carnival, Victoria Rink, Montreal, QC depicts a fancy-dress ball held on ice at an early indoor rink. The ball honored Queen Victoria’s youngest son, Prince Arthur, who was living in Montreal at the time. Not only is the event unusual, but so is this ice skating artwork. It may look like a painting, but it is actually a composite of more than 150 photographs. Pioneering Canadian photographer William Notman (1826-1891) was responsible for this highly-ambitious composition. To create it, he invited the attendees to wear their costumes to his studio and photographed each one separately. He and his assistants then combined all the individual portraits, transferred the composite onto a canvas treated with photographic chemicals, and hand colored the whole thing. Sadly, ice skating balls are very uncommon, and I’ve never heard of one taking place in recent times.

Dafoe, Frances. Figure Skating and the Arts, Eight Centuries of Sport and Inspiration.

Riedell Skates. “History of Ice Skating: How Figure Skating Have Evolved Since the Beginning“. Blog post. May 31, 2012.

With sport considered as a male activity throughout history, it is no surprise that the history of art follows this same ideology. However, a rare...