From Spindle and Distaff to Mass Production: Spinning in Art 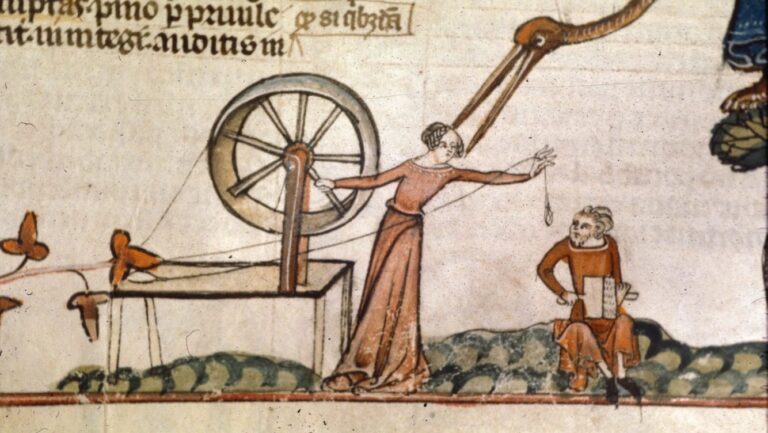 Woman at a spinning wheel with a man seated nearby on the ground, and a monstrous bird in a tree, date unknown, French provenience. British Library, London, England, UK.

There are many artistic representations of women spinning, created across time and in various places. Let’s take some of the great depictions for a spin (pun intended!) and learn more about this activity.

Spinning as a Daily Domestic Activity

Spinning consists of the twisting together of drawn-out strands of fibers to form yarn. It is the major activity of the textile industry, practiced since ancient times, mainly by women.

The basic tools used to spin the fibers were the spindle and the distaff. A distaff is designed to hold the unspun fibers, meanwhile a spindle is a straight spike, usually made from wood, onto which the fiber is being spun. The most commonly used fibers in Europe were wool and flax. A woman spinning flax, as depicted by Uno Troili, was a popular motif. The motif also gave the artist an opportunity to create an elegant composition, with the arm and hand sensitively holding the thread. The woman is sitting in a niche on a stone, which places her in an ancient Roman environment.

A similar focus on hands is visible in another painting by Jozef Hanula. The concentrated spinner, depicted in profile, is pulling a piece of fibre. Similarly to many other portraits by Hanula, the model wears a traditional folk costume.

Spindle and distaff remained in use in households until the 19th century and beyond, mainly because of their simplicity. However, a new invention appeared in Europe in the middle ages – the spinning wheel. It became a crucial tool in the cotton textile industry and laid the foundations for future machines, developed during the Industrial Industry. Being such an important device, it has been depicted in many artworks, from medieval manuscripts to 19th century domestic scenes.

Towards the end of the 19th century, industrial spinning became more frequent. From an activity performed at home, it transformed into employment, with many women working together at the same time. Furthermore, as the Industrial Revolution progressed, the bulk of the work became automated.

Next to multiple realistic representations of spinning as daily work, some paintings represent a more symbolic meaning of this activity in which a spinster at work is approached by an admirer for example. Just like in this painting by Pieter Pietersz.

In the artwork depicting an elegant couple the man, holding a tankard, is seducing the young woman who stares directly at us. Therefore she must choose between the spinning wheel and the tankard, between virtue and vice. Another, mythological meaning of spinning is related to a destiny with yarns representing lives.

In this painting, the three female fates spin the thread of life and determine its length as well as where it ends. Clotho, in the middle, holds the distaff, Lachesis spins the thread and Atropos bites the thread with her teeth.

And here’s what happens when you get on spinners’ nerves… We’ve already explained the way spindle and distaff work. Below you can see an alternative use.

This is a miniature from a medieval manuscript, representing Orpheus lying on his back, protecting himself from Thracian women armed with spindles and distaffs. Why? According one of the multiple versions of the myth, after he descended into the underworld to find his beloved wife, Eurydice, and had lost her, Orpheus withdrew into solitude. Feeling rebuffed, Thracian women set upon him.

In this artwork we see a spinning wheel and distaffs, the attributes of the housewife and symbols for domestic activity. Yet, instead of calmly working, the women are beating a man up. According to the caption, the man is being punished for his alcoholism. A lesson to learn: don’t mess with spinners!