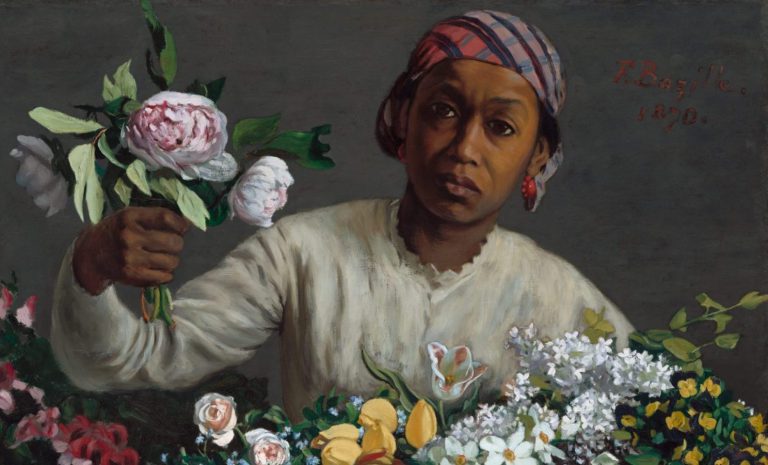 Undoubtedly you all have heard of Claude Monet, Auguste Renoir, Alfred Sisley or Edouard Manet. Yet, fewer of you will have heard of Frédéric Bazille, a friend and fellow painter of all of the above. Hence, we ask, why did he disappear from the mainstream history of Impressionism and why don’t we study Frédéric Bazille’s works?

Frederic was born to a Protestant upper-middle-class family in Montpellier, southern France, in 1841. His family dream was that he would become a doctor. However, instead of enrolling in medicine in Paris, he showed up at the studio of the painter Charles Gleyre. From 1861 onwards he shared a studio with Claude Monet and Auguste Renoir and soon became part of the Parisian bohemian meetings at the Café Guerbois. These meetings included painters Édouard Manet Alfred Sisley and Henri Fantin-Latour, the writer Émile Zola, and the sculptor Zacharie Astruc.

Dissatisfied with his work, or short of money (which he often shared with Monet), Bazille often painted new works onto old canvases. Usually, he did not apply a new ground layer covering the previous work but just rotated the canvas 90 or 180 degrees. For example, originally, the painting below was a vertical bust-length portrait of a man.

Bazille also reused his first canvas, Young Woman at the Piano, when it was rejected by the jury of the Parisian Salon. Instead he painted a biblical scene showing Ruth and Boaz. Sadly, once overpainted, the original work disappeared from record. The only description of what it might have looked like in colour we find in a letter he wrote to his mother:

“The terribly difficult part is the woman; there is a green satin dress, which I hired, and a blond head that I am really afraid of not doing as well as possible although Courbet complimented me on it when it was just begun.”

Frederic Bazille in letter to his mother, Hidden Paintings in the Work of Frédéric Bazille, National Gallery of Art.

A new way of painting

Bazille wanted to paint contemporary life in a new way, challenging the aesthetic conventions of the day. This was very much like those who, four years after his tragic death, opened the first Impressionist exhibition. In December 1863, Bazille wrote that “painting figures in the sun” was his aim, as excellently manifested by the painting above. Berthe Morisot noted that this painting embodied the vision of the rising new generation who strove “to place a figure en plein air.” Who knows how Impressionism would have developed, had he had a chance to live longer and create more.

In 1870 Bazille, a staunch supporter of democracy amazed his family and friends by joining the elite Third Regiment of Zouaves on August 16 to defend Napoleon III and the French Republic from Prussian invasion. He fell on the battlefield just shy of his 29th birthday. His enlistment papers listed him as: “Bazille, Jean Frédéric, esquire, aged 28, history painter by trade.”

Want to learn more about Impressionism? Check out our online art history classes: