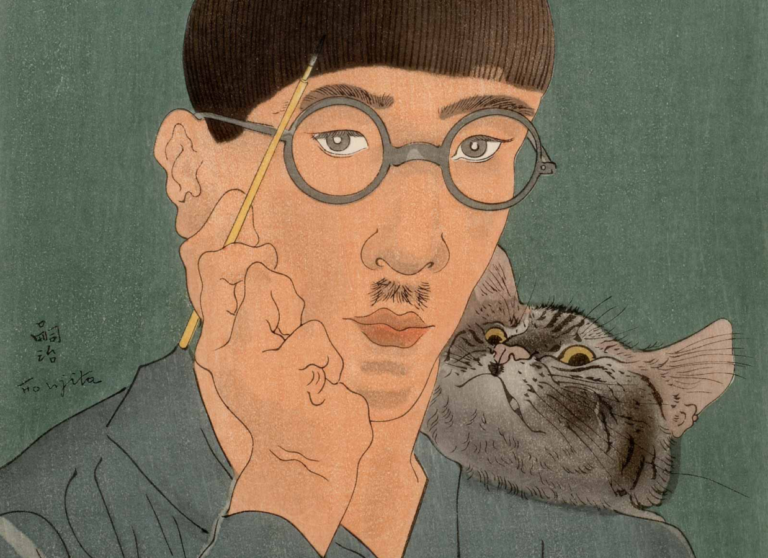 While there are many artists who can be called cat-lovers, only one can be called the master of cats. Léonard Tsuguharu Foujita was a Japanese–French painter and printmaker born in Tokyo, Japan. He applied Japanese ink techniques to Western-style paintings. He has been called "the most important Japanese artist working in the West during the 20th century".

In 1910 Foujita was twenty-four years old and that was the year when he graduated from what is now the Tokyo National University of Fine Arts and Music. Three years later he finally went to the place of his dreams - Montparnasse in Paris, France. When he arrived there, knowing nobody, he pretty quickly met Amedeo Modigliani, Pascin, Chaim Soutine, and Fernand Léger and became friends with Juan Gris, Pablo Picasso and Henri Matisse. So he met everyone. He even took dance lessons from the legendary Isadora Duncan.

Foujita, compared to his fellow artists, quickly started to make a great deal of money. By 1925 he even had received the Belgian Order of Leopold and the French government awarded him the Legion of Honor. Foujita's first studio became the envy of everyone when he eventually made enough money to install a bathtub with hot running water. As a result, many models came over to his place to enjoy this luxury, among them Man Ray's famous lover, Kiki, who boldly posed for Foujita in the nude in the outdoor courtyard.

But today, we will be talking about Foujita and cats.

"I'm not like an old lady who can't live without a cat. And I don't need a pedigree cat. I take in strays. There aren't many of them in France, though I do come across one or 2 each year. And I look after them."

Within a few years, particularly after his 1918 exposition, Foujita achieved great fame as a painter of two subjects in particular: beautiful women with ivory skin and cats. All in a flat, decorative style that blended Western influences with visual traditions of his native Japan.  This unique style utilized elegantly formalized draftsmanship drawn from Japanese and Indo-Persian aesthetics, enlivened with a spirit of decorative Art Deco glamour—and it proved immensely commercially successful.

Foujita clearly loved cats. He painted and drew plenty of them. He also often painted his self-portraits with cats.  And many others without them. For sure Foujita's ego was one of the biggest among all of the dandy icons of the Jazz Age Paris.

"The reason why I so much enjoy being friends with cats is that they have two different characters: a wild side and a domestic side. This is what makes them interesting. If you keep a young lion, or a young tiger, in your house, it's fine as long as they're small, but after a while you don't know what to do with them. A cat's a wild animal, and I like that."

In 1930 in New York Covici Friede published Foujita's Book of Cats with 20 etched plate drawings. This is one of the top 500 (in price) rare books ever sold, and is, as a result, ranked by rare book dealers as "the most popular and desirable book on cats ever published."

In the interview with Milwaukee Journal in 1935 Foujita stated:

"Ladies who would be alluring to men should surround themselves with cats... I never look at men only at women–they have, each one such marvellous possibilities of beauty. But unfortunately most of them have not developed these possibilities because they have not learned the lessons cats can teach..."

After leaving France in 1931 and spending years travelling in the Americas, Foujita returned to Japan where he sided with the Empire during its fascist period. In 1950, the artists emigrated to France because his imperial sympathies made it difficult for him to remain in his homeland after its defeat. Five years later, he was naturalized as a French citizen, converted to Catholicism, and even took the Western name Léonard. He took up residence in Villiers-le-Bâcle, a town southwest of Paris, and focused on religious paintings, particularly the murals of a chapel in Reims, completed in 1966 two years before his death.

He died at 81 in Zurich, Switzerland, where he was undergoing treatment for cancer and was buried in the village cemetery near his home.

Read more about cats in art:

Within art cats can be symbolic and, depending on the period of time, the interpretation may vary. Their nocturnal habits gave them a negative...

Cat Obsession Embodied: Check Out These Cat Museums from All Around the World

Cats have been a common sight in different channels of art for a long time. That’s why museums dedicated to feline art are popular stops, proving...

The Ancient Egyptians revered cats of all kinds and honoured them in their art. From servals to the mighty lion, cats were seen as powerful forces...