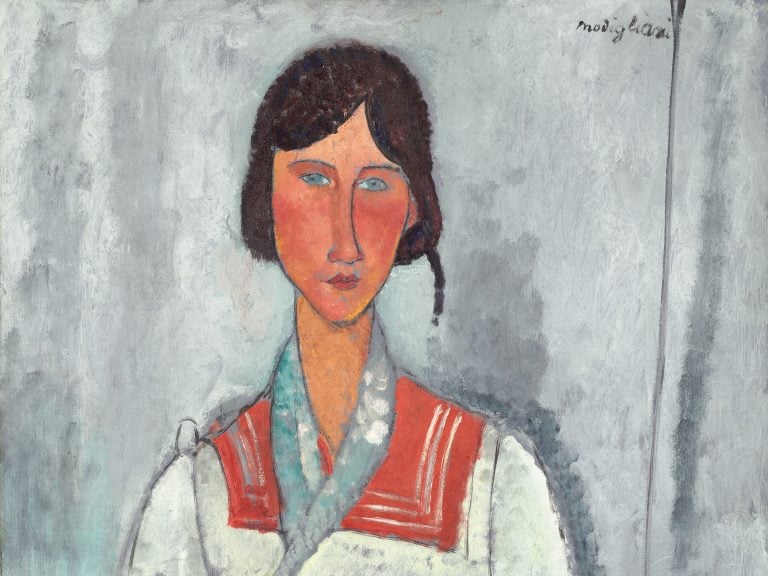 The History of Amedeo Modigliani’s Portraits

Amedeo Modigliani and His Nude Series

This article goes out to every art lover who is also crazy about movies. In a more specific dedication, to rom-com lovers everywhere! Picture this: the one you love is getting married to someone else. Now, as if that wasn’t drama enough, you are also asked to be the maid of honor at the wedding. That’s the basic plot of the movie Made of Honor (2008). But the most interesting thing for us here are the art references seen throughout the movie.

The movie’s beginning gives us a view of the Metropolitan Museum of Art in New York. Tom (played by Patrick Dempsey) goes up the famous MET’s stairs and crosses the museum on his way to his best friend. Hannah (played by Michelle Monaghan) works there and is in the middle of restoring a painting.

Even though they didn’t start on the best of terms, Tom and Hannah have been best friends since college. However, as expected of a classic rom-com, at some point friendship is not enough for one of them. Tom eventually realizes that he is in love with his friend – right before she announces her engagement to someone else. The movie then revolves around him trying to be the best maid of honor possible – just so he can stop the whole wedding from the inside.

One of his jobs as maid of honor is to accompany the bride on any wedding-related errands. When meeting with the priest who will officiate the wedding, Hannah is asked to describe her feelings for her fiancé – but she cannot seem to find the words. At that moment, Tom brings up artist Amedeo Modigliani to explain Hannah’s spirit. Showing how well he knows her, he blurts:

Modigliani. Your first summer in New York City, you were dating a guy who worked on Wall Street and he asked you to move in with him and you weren’t quite sure. And that was around the time you discovered Modigliani. You became obsessed with his painting of this woman who had a blue scarf on, holding a baby. And Hannah says “That painting captured the essence of that woman better than any photograph.” I also remember that she freaked because she said she felt more passionate about that painting than she did about Mr. Wall Street. And she wondered if she ever could meet somebody that could make her feel as passionate as that work of art.

The artist mentioned is Italian painter Amedeo Modigliani (1884–1920). Considered an Expressionist artist, Modigliani drew, painted, and sculpted. Heavily influenced by African sculpture, he created a very particular style that marked his short career. Most of his fame and recognition came after his death though. He died very young, at only 35 years old, but still managed to become one of the most important portraitists of the 20th century.

Even though the artwork that Tom mentions never appears on-screen, the painting is most likely Roma Woman with Baby (1919). This portrait was among the last ones Modigliani painted before his death in 1920. It is now part of the permanent collection of the National Gallery of Art, in Washington, DC.

A seated woman shown from the knees up holds a baby in her arms. Her light-colored skin has peach undertones and a blushing complexion can be seen on her cheeks. Her dark hair is pulled back while the strands in the front cover most of her forehead. She wears a white blouse with a red squared collar as well as a thin scarf around her neck and down her chest.

The baby in her lap is wrapped in a navy-blue blanket and wears a light-pink cap with thin dark stripes. With a firm contour drawing, both the woman and the baby are outlined in gray. The wall behind them is also gray with blue-green undertones. In fact, the entire painting carries a color palette of various shades of blue-green. The woman’s eyes, for example, match her skirt and scarf.

In Modigliani’s unique style, the human features are elongated and simplified. He represented the female figure with an elongated face, small oval eyes, pursed lips, and a long neck. The image doesn’t even have much tri-dimensionality, and the artist’s loose brushstrokes create a textured effect. His signature in black lays near the upper right corner of the frame.

Better Than a Photograph?

Painting subjects in their true-to-life form was not the goal of Expressionists. Expressionism marked a rupture from aesthetic conventions, rejecting fundamental rules and working with exaggerated and distorted shapes. In such a manner, this painting is far from looking like a photograph – that is not its intention.

However, precisely because this woman’s image is not painted to resemble a photograph in any shape or form, Hannah has a point. It’s said in the movie that:

That painting captured the essence of that woman better than any photograph.