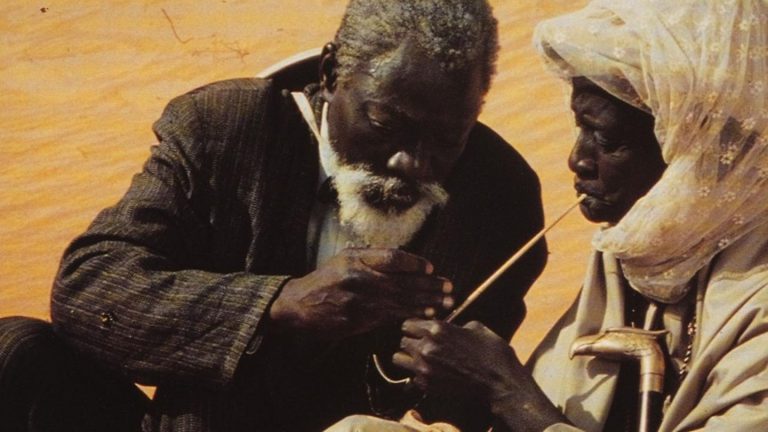 “It is good for the future of cinema that Africa exists.” Born on January 23rd, 1945, in Colobane, a small town south-west of Dakar, Djibril Diop Mambéty remains one of the most recognized African filmmakers of his generation.

After studying theater, he was a member of the Sorano National Theater in Dakar. At the age of only 17 he created the first Senegalese café-theater, wishing, perhaps, to highlight the art of his country. Meanwhile he made his debut as an actor in the theater as well as in Senegalese and Italian films. He then went on to shoot his first two short films, Contras’City (1969) and Badou Boy (1970).

In 1972 Mambéty directed his first feature film, Touki-Bouki (also called Le Voyage de la Hyène). It features two young Senegalese, eager to leave their country for France at any cost. The film won the International Critics’ Prize at the Cannes Film Festival in 1973 and became the masterpiece of the African filmmaker’s short but intense career. 20 years later, he continued to address the theme of ambition mingled with madness by shooting his second – and final – feature film that once again stunned both critics and audiences, Hyènes (1992). This film, which evokes the terrible and disastrous revenge of a humiliated woman, is adapted from Friedrich Dürrenmatt’s play, The Visit of the Old Lady. The hyena, a recurring motif in Mambéty’s art, is his favorite animal. Decorating his ring, it symbolizes cowardly and fearful man, who also clings to life as best he can.

Djibril Diop Mambéty subsequently undertook a trilogy, which he called Histoires de petites gens (Tales of little people). They were for the filmmaker “the only true, coherent people […], for whom every morning brings the same question: how to preserve what is essential for themselves”. Only the first two parts of this manifest trilogy actually saw the light of day; Le Franc in 1995 – which won the Best Short Film Prize at the fifth African Film Festival in Milan – and his last film, La Petite Vendeuse de soleil [The Little Girl Who Sold the Sun] (1998). This luminous medium-length film features the young Sili, a veritable ray of sunshine. She perfectly illustrates a Senegalese youth full of optimism and determination. The director did not have time to finish editing La Petite Vendeuse de soleil. On July 23, 1998, Mambéty died of lung cancer in Paris.

Djibril Diop Mambéty was fully in line with Senegalese narrative cinema, which is characterized by a certain social and didactic realism. It should be noted that the beginnings of Senegalese cinema go back well before independence from French power; in 1955, Paulin Soumanou Vieyra directed Afrique-sur-Seine. He disobeyed French law as inhabitants of the colonies were prohibited from making films at the time. The tone was set. Therefore, Djibril Diop Mambéty was an important part of this artistic continuity and marked African cinema in the same way as Ousmane Sembène, the “father of African cinema.”

Djibril Diop Mambéty has continued to show the world the qualities and the shortcomings of Senegalese society. The filmmaker seems to have been constantly driven by the desire to create his art with respect for African traditions, omnipresent in a staging of colorful, carnival-like characters, animated by dialogues crying out for truth. Dressed in visually strong costumes, they evolve within panoramas revealing both the beauty of Senegal and its character, both deeply natural and urban. He who said that he “breathes Africa” ​​merged his formidable sense of aesthetics with great sound efficiency. The music effectively constitutes, in the whole of Mambéty’s filmography, a character in its own right who tells us its own story.