Flaming June or Dorothy Dene? A Muse of Frederic Leighton 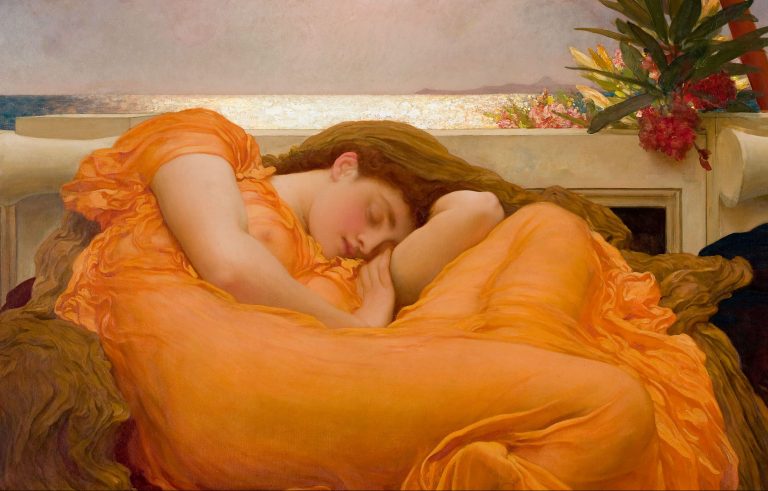 In 1879, Frederic Leighton’s biographer and neighbor (that’s handy, isn’t it?), Mrs. Barrington, noticed “a young girl with a lovely white face, dressed in deepest black, evidently a model.” This girl was an actress Dorothy Dene, a muse, and the most significant woman in Leighton’s later years.

Noticed by a Neighbor

And it was all thanks to Mrs Barrington, who first noticed Dene outside one of the small studios opposite Leighton’s house. Following this, she advised Leighton to track her down and ask her to model for him. Subsequently, Dene’s two sisters followed her into modeling. Initially, they lived in Clapham, but when their collaboration expanded, the girls moved to a flat in Avonmore Mansions, which was just a few minutes walk from Leighton’s home.

A Partner or a Muse?

Leighton, who was the First Baron, felt very comfortable in Dene’s company and the press often saw them together at events and exhibition openings. The press even speculated they planned to marry since she spent a lot of time at his house. However, Leighton denied any rumors and admitted they had never been engaged. Instead, it was a real muse-and-master relationship since Leighton was also the greatest supporter and sponsor of Dene’s acting talent. Their bond might have even inspired the playwright George Bernard Shaw, as some speculated, to write his famous play Pygmalion. He knew both of them, so who knows?

Leighton approved of Dene changing her original name from Ada Alice Pullan to Dorothy Dene and he paid for all her diction and acting classes. Although her debut in London in 1885 was a blast and initially she made a considerable career with her stage presence and beauty, eventually her success faltered. Despite her expansion to New York, the critics doubted her acting skills.

However, Dorothy Dene was not his only model. Three years before Bianca, Leighton painted Nanna, named after his model Nanna Risi, known as La Nanna. She was the wife of a cobbler living in the Roman neighborhood of Trastevere and was the mistress of the German painter Anselm Feuerbach. Working as a professional model, she sat for Leighton many times after his return to Rome in October 1858. He described her as “a very handsome model.” This painting also has a second name, Pavonia which refers to an Italian “pavone,” which means “peacock,” since the painting features a peacock feather. This painting is often juxtaposed with Bianca, the black versus white, the peacock versus the dove.

Nevertheless, it was Dorothy Dene, his muse, whom he called to his deathbed in 1896, 16 years after their first meeting. He also left her a considerable amount of money, yet she didn’t enjoy it for long, as she died just three years later when her health began deteriorating after Leighton’s death.

Clytie, above, was the last painting by Lord Leighton. He never finished it. Clytie was a nymph in Ovid’s Metamorphoses whom Apollo rejected. Heartbroken, she spent days watching Apollo drive his chariot of the sun across the sky (Apollo was also the god of the sun) until she rooted to the ground and turned into a flower. Some say that work so imbued with emotion and despair, which stands out from the rest of his oeuvre, must have been autobiographical… Did Leighton feel like Clytie, rejected by Dene? We may never know.