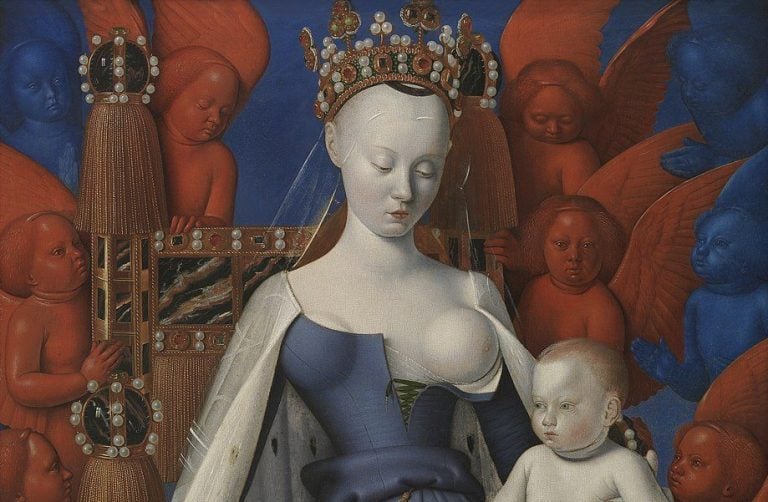 One look at the 15th-century masterpiece, and you may think it is actually a modern creation. Pops of deep blue and red cherubs form the background of a porcelain-skinned Madonna with her bare breast holding onto baby Jesus. The painting, which is the right panel of The Melun Diptych, is interesting in that the artist seamlessly utilized artistic styles from across Europe. The truth of the matter is that this painting hardly fits in with its counterparts making it stand out as a masterpiece even more.

An astoundingly low amount of Jean Fouquet‘s paintings have withstood the passing of time. And fortunate for us, The Melun Diptych is one of them. While there are not many paintings to discuss, during his lifetime we know that the French artist was a favorite at the court of King Charles VII. Étienne Chevalier, the King’s treasurer in 1452, commissioned this particular artwork. Prior to the French court, the artist studied briefly in Italy. This experience heavily influenced the artwork in question.

The theme itself, that of the Virgin Madonna and the Child, is nothing revolutionary. However, Fouquet’s rendition stands out amongst similarly themed paintings by other well-known artists of the time. It leans heavily on the notion of the Virgin as a beautiful and divine figure of royal descent. This is further signified by the pristine porcelain white skin, the use of gold, red, and blue pigments, as well as costly gemstones. His painting elevates the subject to an otherworldly representation.

Note the difference in how Fouquet depicted the crown as an actual crown, decorated in precious jewels. This is in opposition to the decorative halos, known as nimbus, in similar art of the time period. Both styles are beautiful, but the French artist’s version shows the wealth and splendor of the French court.

Breaking down the use of color even further, the red and blue hues symbolize other meanings that add to the regal depth of the painting. During the Renaissance, the color blue was most often associated with the Virgin Mary, as it was synonymous with her purity and regal nature. Red, likewise, was associated with power and authority. The pearls once again point to the Madonna and Christ Child. Gold can be seen as a symbol of power or status. Used together, with the abnormally white skin tones of the main figures, this painting literally screams of power, faith, and wealth.

Art historians have argued, going back and forth on the identity of the model for the painting. Most notably argued is Agnes Sorel. The woman, the first recognized mistress of the French King, Charles VII, is said to have dressed rather provocatively. It is said that her style of dress heavily inspired Fouquet, which is reflected in the painting where the Virgin Mary appears to be about to nurse her child, her bare breast out on display. She died at the young age of 28, suspected of being poisoned.

Originally, the two panels hung in the Collegiate Church of the Notre-Dame, commissioned to hang over the grave of Fouquet’s patron at the time. However, the panels are no longer together. The left panel that depicts Étienne Chevalier and his patron Saint, is located at Staatliche Museen in Berlin. The right panel is located at the Royal Museum of Fine Art in Antwerp. The artwork in its entirety combines outside regional influences. The left side, depicting Etienne and the Saint, recalls Flemish influences of the time. The Madonna? It shows Italian influence. The latter more than likely influenced by the artist’s years in Italy.

P.S. If you want to see the painting in person, we have great news! The Royal Museum of Fine Arts Antwerp reopened just recently after more than a decade-long renovation of the museum.