Suffered a Break-up? See This Art 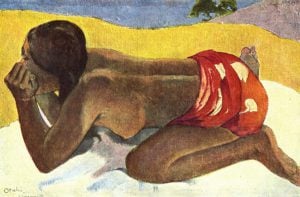 Art Guide to Quarantine by DailyArt

Who hasn’t suffered a break-up may be the first to cast the stone at all of those who don’t sleep at night and cannot stop crying at a single thought of the ex-beloved. Yes, we’ve got the support of our friends and the uncountable number of cry-a-river songs, but we need more. We need art, which sometimes is the only solace, the art for a break-up, to realize that we’re not alone in our pain.

They Broke Up With You

So they broke up with you. Maybe they love somebody else, maybe you did something wrong, maybe you didn’t expect it at all and it’s just a shock to you. In any case, you are the abandoned one, you are the unloved one, you are the one who cries your stomach out and cannot wrap your mind around one question: “why?”. You cannot find yourself a place in your own house, as every single corner is still permeated with the presence of your beloved. You lie on the bed as the lady from Toulouse-Lautrec’s painting, too tired to take off your clothes, too tired to cry evermore, too tired to think. Perhaps you just want to be invisible to the rest of the world. The unfinished, hasty quality of this oil study reminds me of this feeling of being unfinished, not being enough, being half empty, being all alone.

You Broke Up with Them

You have decided to close it. Maybe they cheated on you, maybe you’ve grown tired of them, maybe you have met someone new, maybe they’ve been hurting you too much and the whole situation has become too toxic. Do you feel guilty? Do you feel you’ve ruined somebody else’s life? Or maybe you’ve done it to save them? Or save yourself? Anyhow, being the one who ends the relationship isn’t any easier. It hurts like hell, but it may also be extremely liberating.

Look at Capuletti’s work. Nudity is often associated with freedom, and if juxtaposed with a cityscape, it gains a additional symbolic significance of freedom from societal constraints. The protagonist is standing in a relaxed position, but also straight and proud. The past is behind them (together with the viewer), the future is ahead of them. Their nudity may also symbolize the new beginning, the new “me” that’s awaiting them. The clear blue skies give them and the viewers hope.

You Broke It Up Together

You both have come to the decision that it’s better to end it here. You discussed it together for hours, you cried together, you shouted together, but in the end you both see that there is no other solution. It is clear: you must break-up and go separate ways. Like in Munch‘s oil canvas, each of the protagonists is looking away, she is standing still, he is striding away. Or is he standing, too? (give me your observations).

What intrigues me in this work is the woman’s hair, which seems to turn into some sort of rays of light or energy, which reach all the way to the man. Do they symbolize their thoughts, or do they symbolize the bond that will stay between them even after they’ve separated? The man seems to be hopeless and feeling heavy, painted in cold dark tints. However, the woman is looking towards the water, her figure light and hopeful.

It Just Died on Its Own

Desolation is a state of complete emptiness, great unhappiness, and loneliness. Is that how it feels (and how it shows) when your love dies out and gets lost somewhere between house chores, babies, work, hobbies, and daily worries? Does it feel empty? Have you, as this lady, found yourself seated once and realizing that it’s all over now? That you have nothing else left to say to each other, that you live like two strangers in one house, that your lives should run in two separate directions? The lady isn’t even crying, but her face expresses great sorrow, as she realizes how empty her life has become. She’s looking into the void, away from the painter, away from us. It looks like a still from a movie, but it’s real life. And break-up is always a part of it.