“We do not want pretty pictures to be hung on drawing-room walls. We want... an art that arrests and engages. An art of one’s innermost heart.” – Edvard Munch

British Museum in cooperation with Munch Museum in Oslo treats us to an exhibition of Edvard Munch’s prints, focusing on the period between the 1890s and 1918.

Where is the colour?

I will admit I was a bit sceptical before going to Edvard Munch prints exhibition, for two reasons: large exhibition of prints tend to be difficult to see as typically the prints are relatively small and require close contact, which is difficult in a museum, especially in London, where every show is overcrowded; secondly so much of Munch’s emotion is driven through the use of colour that I worried some of it will be lost with a limited palette. Unnecessarily worried, I may add. [caption id="attachment_21263" align="aligncenter" width="757"] 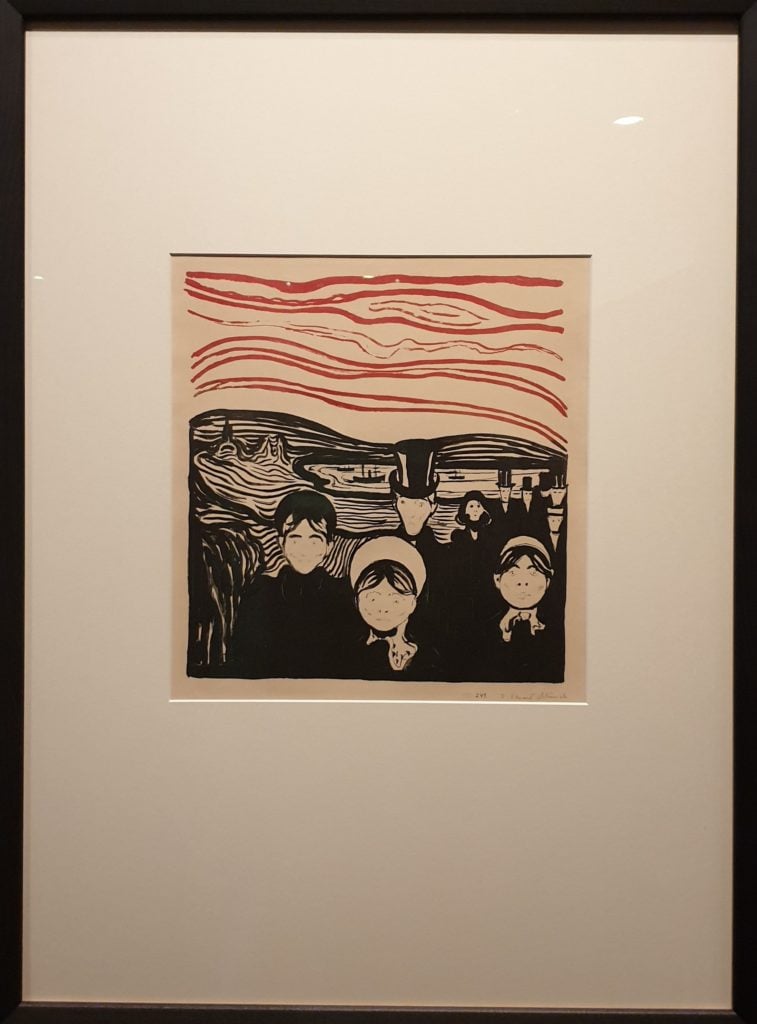 Edvard Munch, Angst, 1896, Munch Museum, Oslo, phot. Joanna Kaszubowska[/caption] My first concern proved unfounded, as the museum makes sure not to let too many people in at once, also we may add for tourists the exhibition is no match in comparison with Elgin Marbles and Egyptian Mummies, all the better for those of us who go to it. I am pretty sure it will also become even less crowded as the Manga exhibition opens on 23rd May. [caption id="attachment_21265" align="aligncenter" width="1000"] 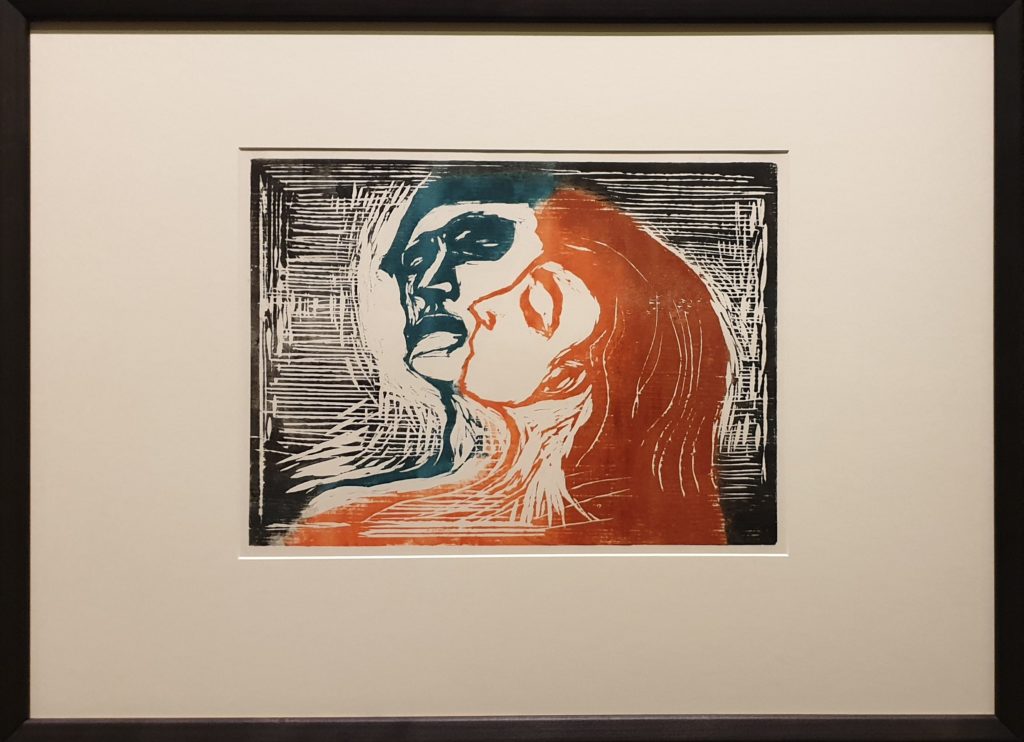 Edvard Munch, Head by Head, 1905, Munch Museum, Oslo, phot. Joanna Kaszubowska[/caption] As for my worry about the lack of colour diminishing emotional impact, I really shouldn’t have worried. Munch is first and foremost an expert in emotion, then he is also a master using all the tools available to him to make us feel it. He is not limited by any technique of printmaking but uses them to his advantage. Giving us dramatic strong lines of the woodcuts, assembling his woodcuts like puzzles to introduce colour and an additional sense of separation, using drypoint to give us the immediacy of raw drawing, printing his lithographs from one or many stones putting all effort necessary to achieve his goal. The exhibition also does a great job of familiarizing us with his methods without ever becoming too technical or distracting us from the prints themselves. [caption id="attachment_21267" align="aligncenter" width="757"] 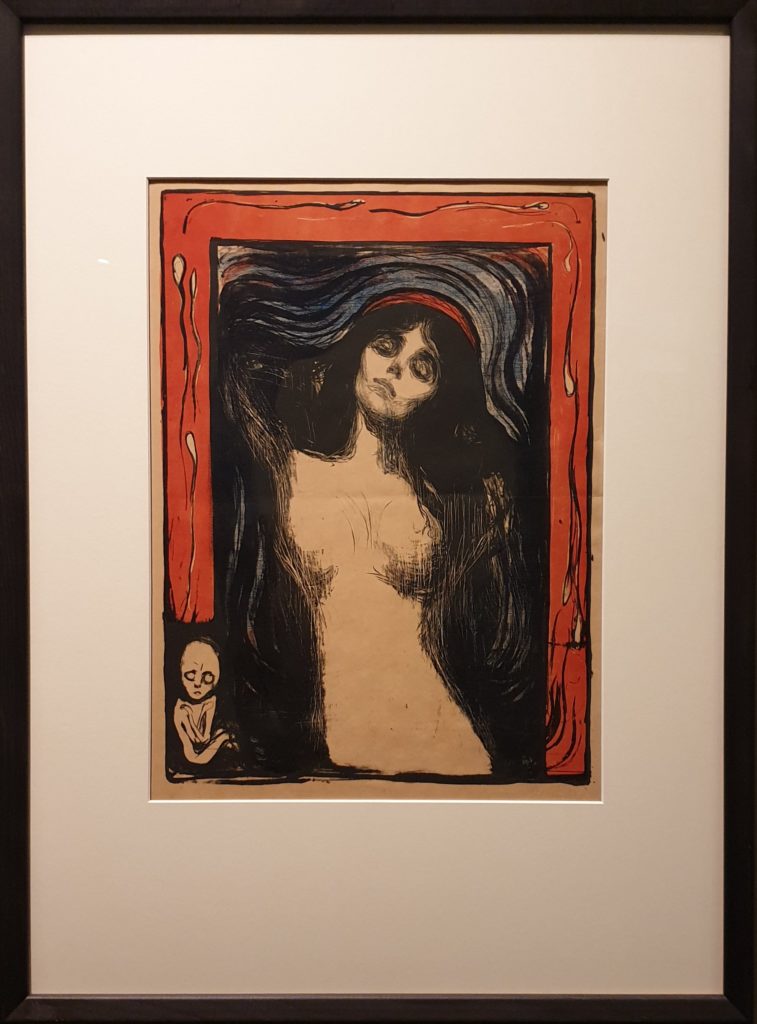 The exhibition is organized around Much’s relation with Oslo, Paris and Berlin. The three cities that played a huge role in forming him as a man and artist. To supplement our experience in each space we can enter a booth showing a movie that brings us closer to the atmosphere of the time, including Munch’s correspondence. The booths help us supplement our experience, without distracting from the main focus – the prints. To draw us even more into the period, the first prints we see are portraits of Munch and Stanisław Przybyszewski, whom Munch met in Berlin and who become his firm supporter. [caption id="attachment_21271" align="aligncenter" width="730"]

The spaces are organized by topics rather than strictly chronologically, we find here extreme emotions, such as the title’s love and angst. Looking at the prints exhibited we can clearly see Munch’s fascination with women. His prints show a longing for a close relationship, one where two people nearly become one. He came back to the topic of the kiss many times in his career handling it in many different ways. Ranging from realistic and moving etching to a simplified, merged form in the two-block woodcut. [caption id="attachment_21273" align="aligncenter" width="768"] 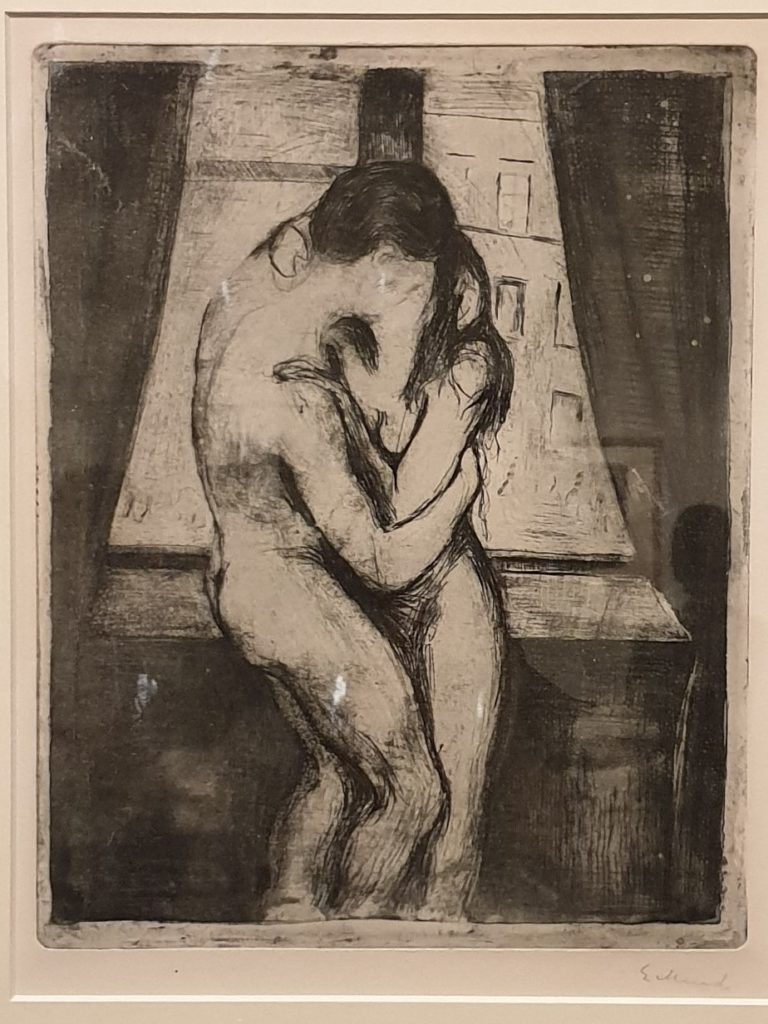 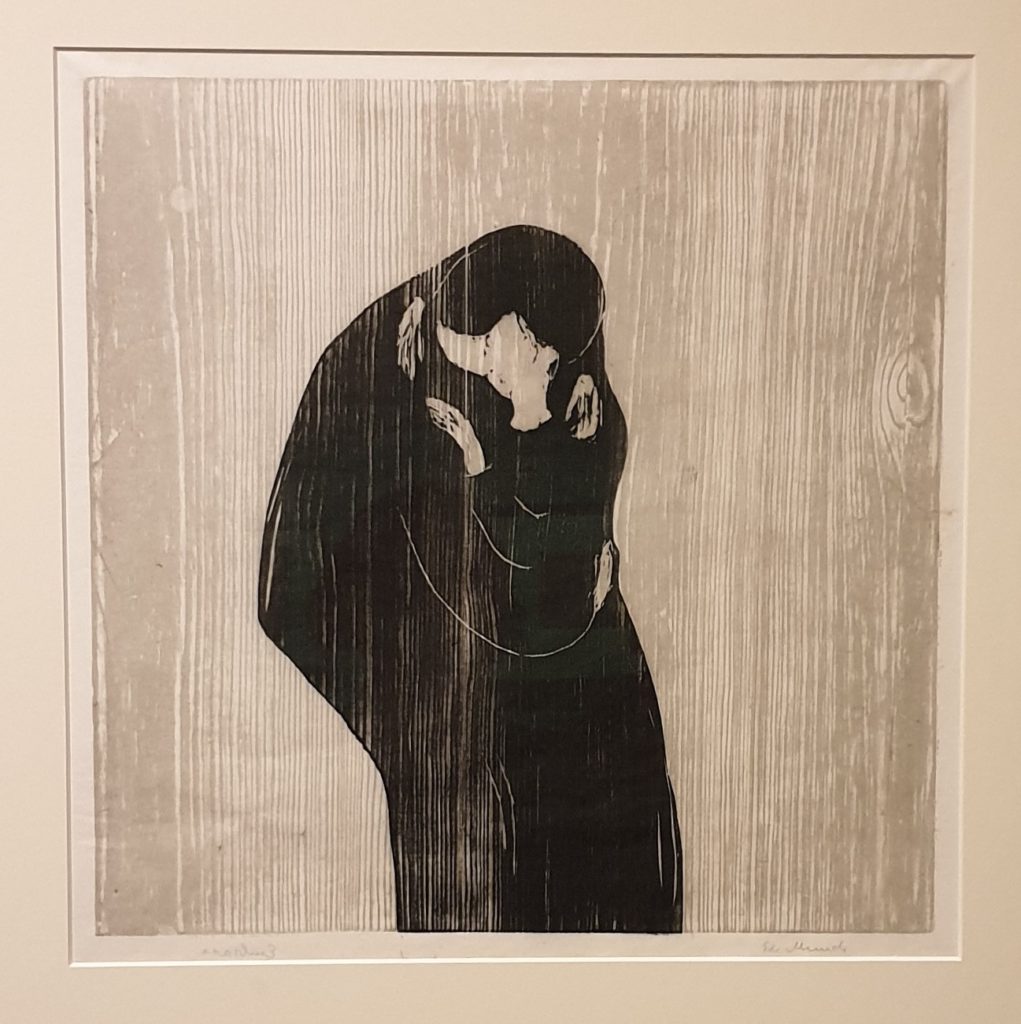 We feel the need to be close to another person, to become one, but there is also his fear of being overwhelmed, overpowered and controlled. The women’s hair becomes a symbol of power, but also a web that can entangle and suffocate a man. The desire to be with someone, to be close makes the man irrelevant, takes away his identity. [caption id="attachment_21268" align="aligncenter" width="755"] 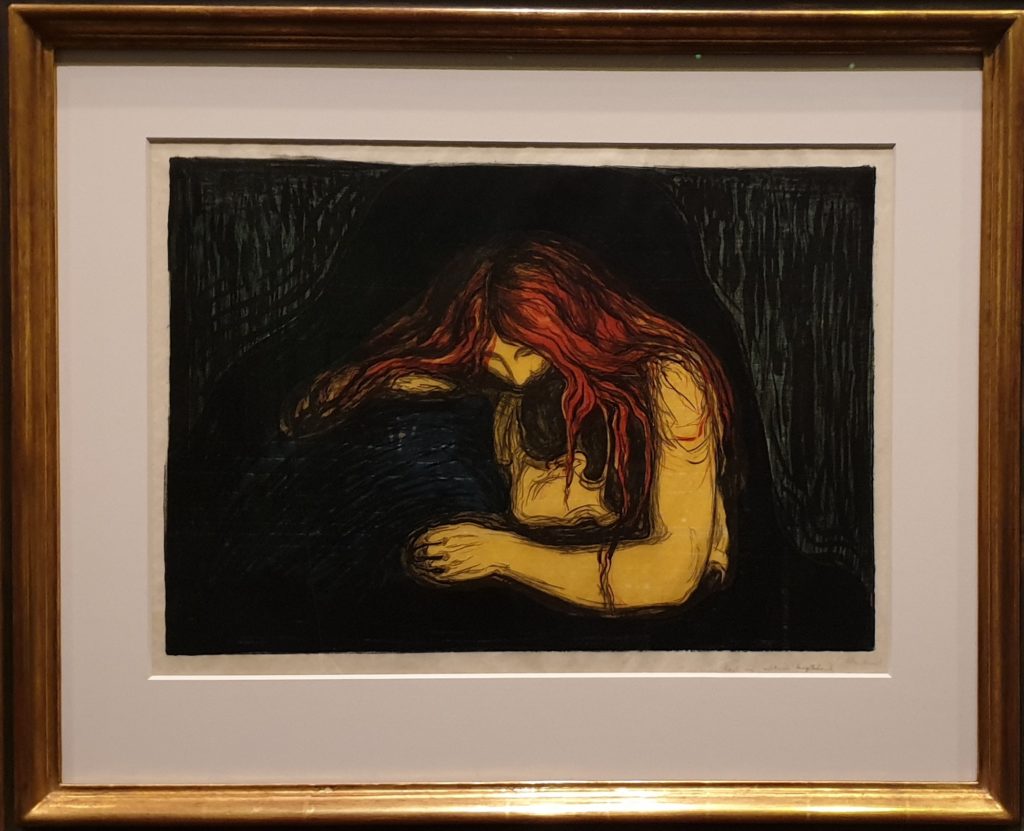 Edvard Munch, Vampire II, 1895-1902, The Savings Bank Foundation DNB, phot. Joanna Kaszubowska[/caption] When Munch tried to avoid the overpowering love and destroying angst, he felt loneliness. His lone figures look to be at peace initially until we realize they are haunted. Loneliness does not offer respite either, it only exacerbates the lack of understanding and desperation. [caption id="attachment_21266" align="aligncenter" width="1000"] 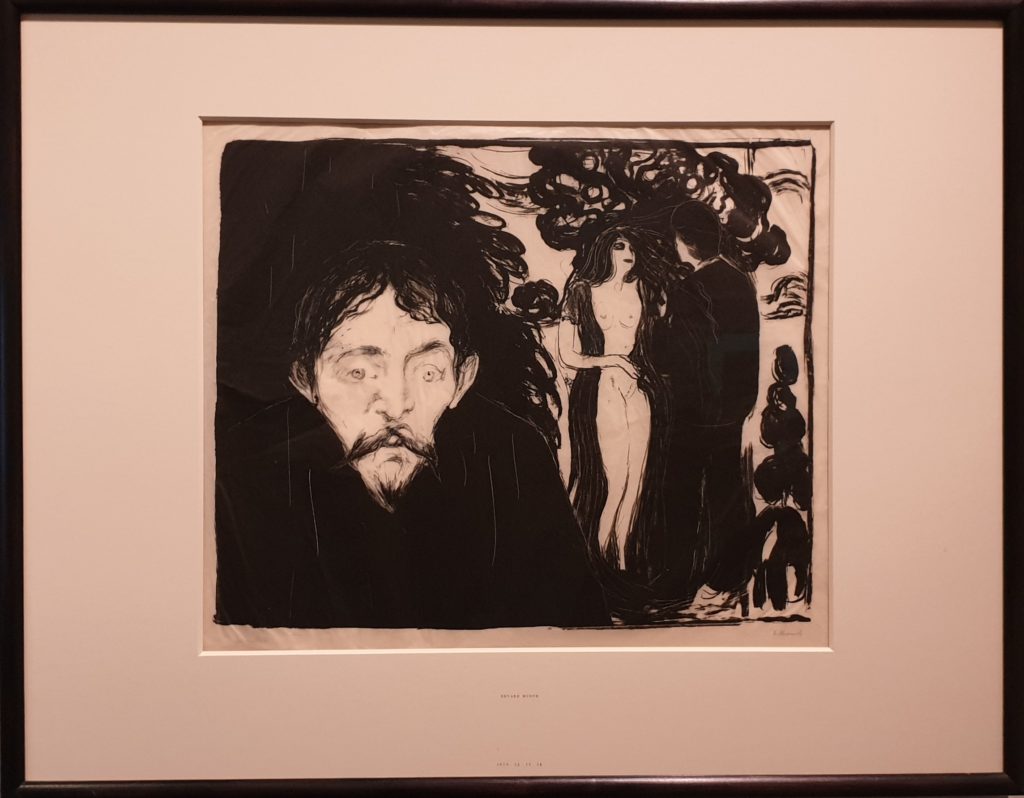 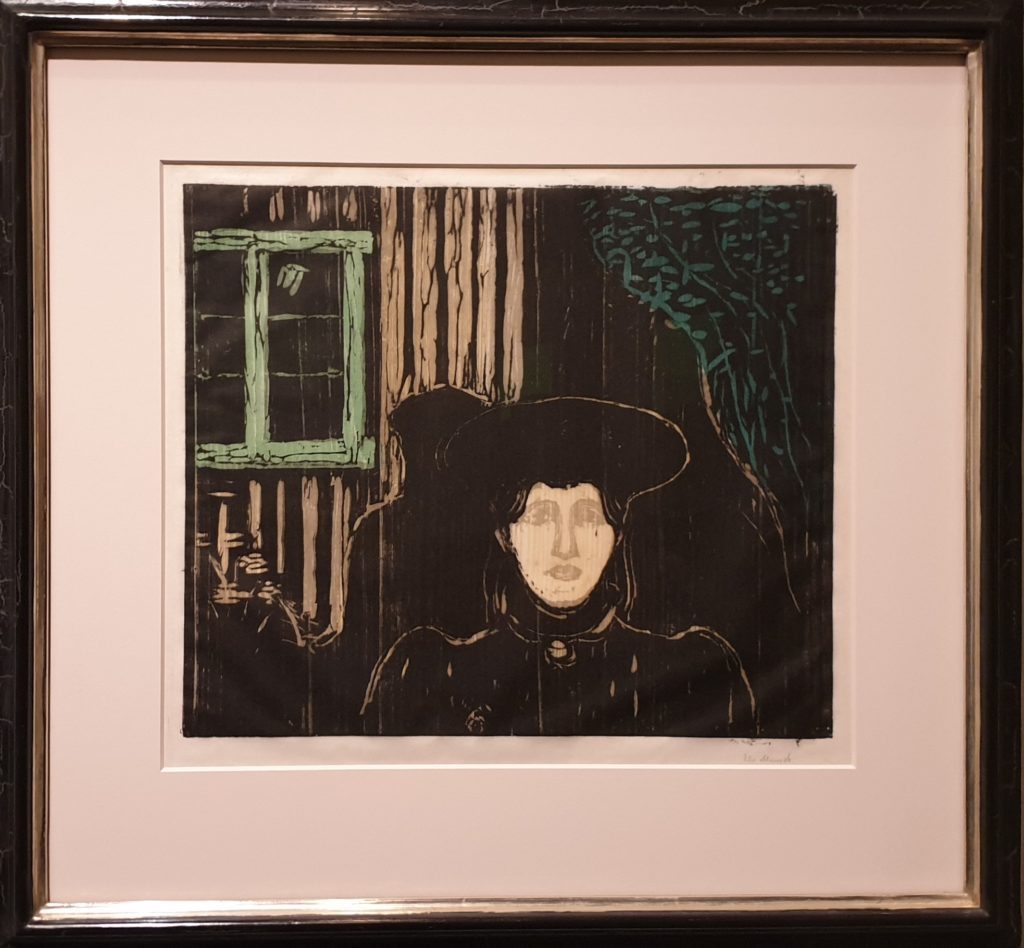 We also have to face life-changing events such as sickness and death. Munch witnessed the death of his mother at the age of 5 and his sister died of tuberculosis when he was a teenager. Both tragedies scarred him deeply and he processed them in his art multiple times. Every single time sharing with us the despair, helplessness and horror of a child experiencing death. [caption id="attachment_21264" align="aligncenter" width="1000"] 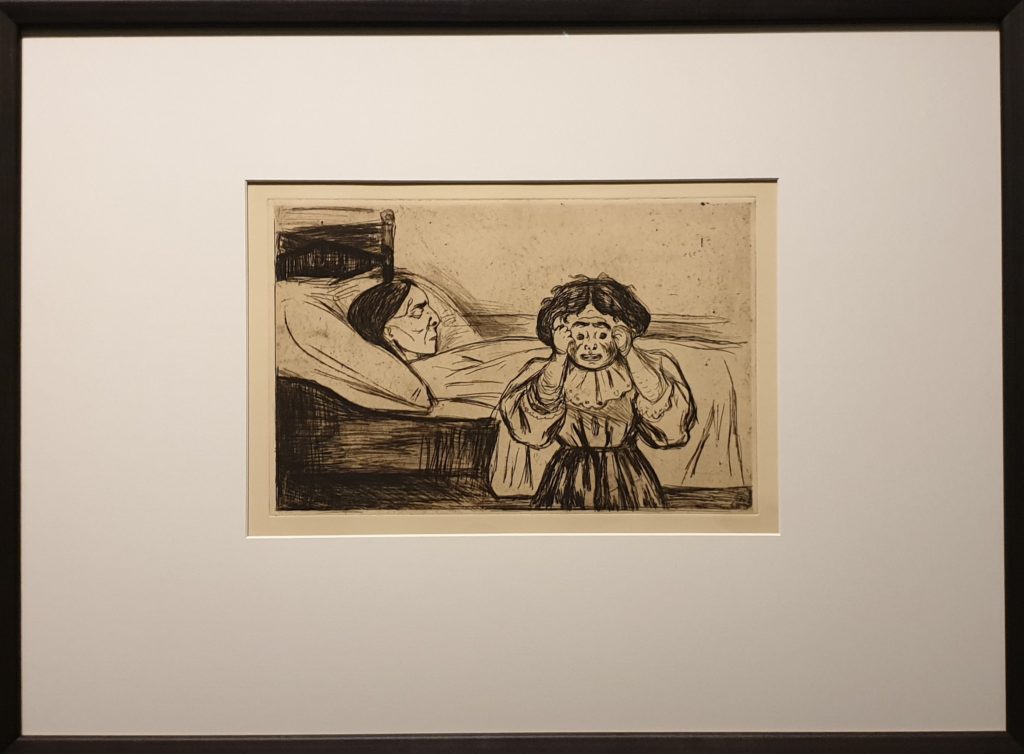 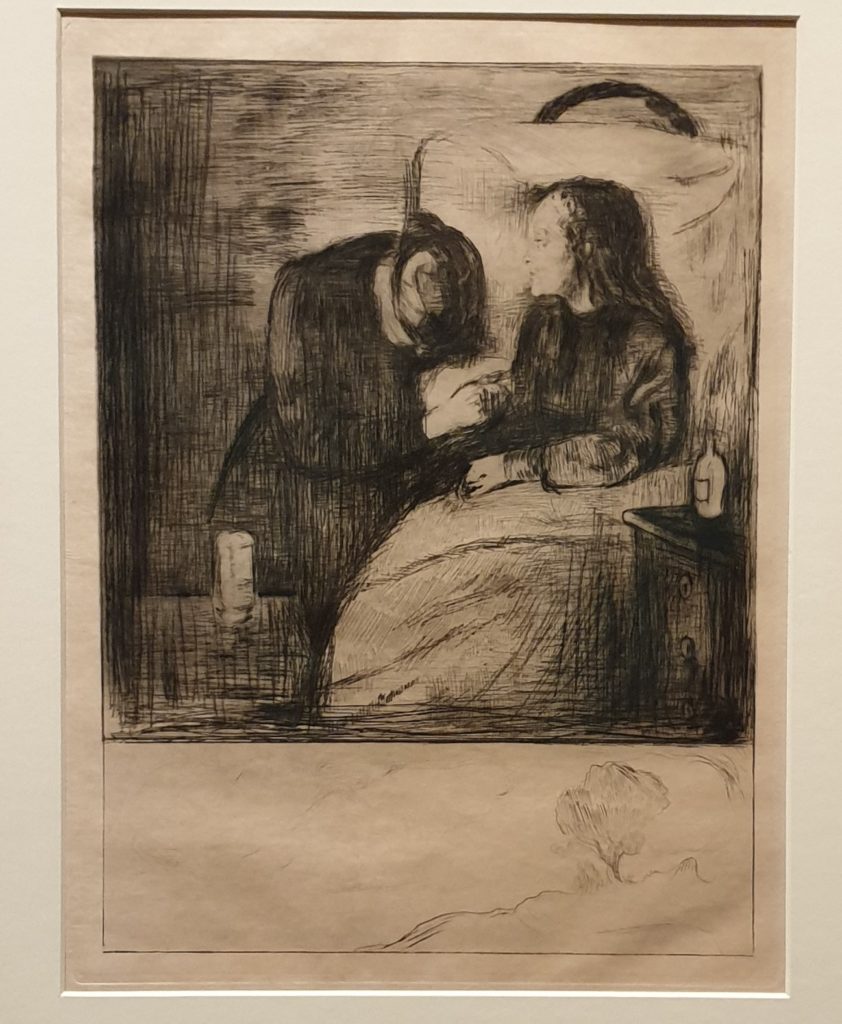 Edvard Munch, The Sick Child, 1894, British Museum, phot. Joanna Kaszubowska[/caption] Many of the prints in the exhibition come from the Frieze of Life. It is a series of images that Munch worked on throughout his life and that came together to serve a single idea in 1918. From then on, the series was curated by Munch till the end of his career. You can read more about it here. The exhibition certainly achieves its goal in presenting Munch as a printmaker. It also achieves Munch’s goal in presenting prints that move us, emotions we relate to, the ‘art of one’s innermost heart’. The angst and loneliness that never go away, but that can be, at least temporarily, kept at bay by love. [embed]https://youtu.be/ecpg-EOYjEo[/embed] Edvard Munch: love and angst British Museum 11 April – 21 July 2019 Price: Members free, Adult £17, Student and 16-18 years £14, Under 16 Free, National Art Pass £8.5, Student and 16-18 2 for 1 offer £14 Here you can read more about Munch’s life and death: Edvard Munch’s Life In Photos Edvard Munch and Death And if you feel like getting to know one more Norwegian artist, the exhibition Painting Norway – Harald Sohlberg at Dulwich Picture Gallery is open till 2nd June

Royal Museums of Fine Arts of Belgium is a large complex of art museums in Brussels, Belgium. Their departments are comprised of Magritte Museum,...

As of May 2021, Paris now has a new art museum to call its own. Located only 500 meters from the Louvre, the Bourse de Commerce Museum is dedicated...