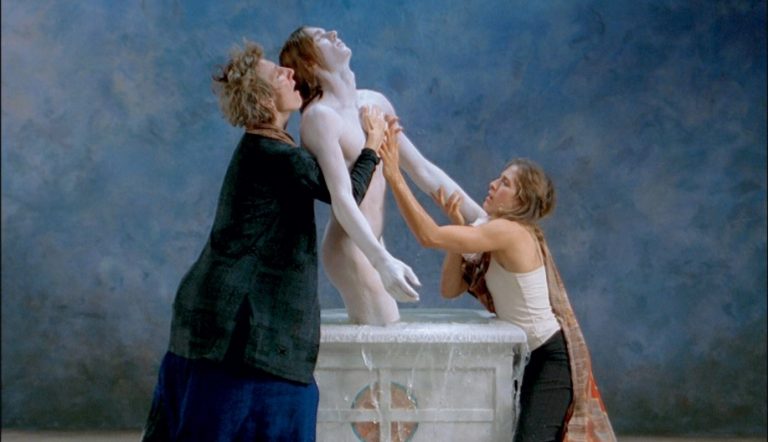 Filmmaking is like Painting – Andrzej Wajda as a Painter

Bill Viola is an internationally recognized contemporary video artist. His work played a huge part in the establishment of video as an important medium in contemporary art. Since the 1970s he has created videotapes, architectural video installations, sound environments, electronic music performances, flat panel video pieces, and works for television broadcasts that are now well-known and appreciated worldwide.

Bill Viola (b. 1951) incorporates themes related to human experiences such as birth, death, and the unfolding of consciousness in his work. His works rely on the use of moving images, technology, and sound. He is inspired by both Eastern and Western art as well as their spiritual traditions: Zen Buddhism, Islamic Sufism, and Christian mysticism.

In 2017, Fondazione Palazzo Strozzi presented the exhibition: Bill Viola. Electronic Renaissance. The show was full of monumental installations focusing on humanity in full augmentation. Humans and their bodies are at the center of his work in which he uses poetic and symbolic styles. Man in his works interacts with the forces of nature: water and fire, light and dark, and the cycle of life.

Viola’s interaction with the classics was the focal point of that exhibition: the dialogue between his contemporary work and the masterpieces of the great masters from the past, from which he has drawn his inspiration. In his early twenties, Viola spent 18 months working in Florence and since then the Renaissance has played a huge role in his works. The setting of Palazzo Strozzi fills Viola’s videos with masterpieces of Lucas Cranach, Masolino, Pontormo, and Paolo Uccello.

Viola’s works on YouTube are nothing compared to experiencing, or rather watching them “live” in the exhibition’s scenography. So here you can watch an exhibition trailer:

Viola’s inspirations are very clear. In the work entitled Emergence (2002), he revisits themes of death and rebirth – in this case, a deathly Christ-like figure emerging from a well flanked by two mourning women.

His unique artistic language is seen in The Deluge (1995), where a building and the surrounding population succumb to a vast flood of water. The work was shown alongside works from the 15th and 16th centuries that the artist used as a reference, inspired by the classics.

But it was not just the artistic sights in Florence that helped to shape Viola’s work. The artist also spent time going around cathedrals and churches recording ambient sounds. One audio work informed by these early explorations is Presence, originally created for the US pavilion at the Venice Biennale in 1995. This six-channel sound installation, tailored to fit each space in which it is exhibited, features whispered voices telling secrets on the edge of hearing, the rhythm of steady breathing, and the deep rumble of a human heartbeat.