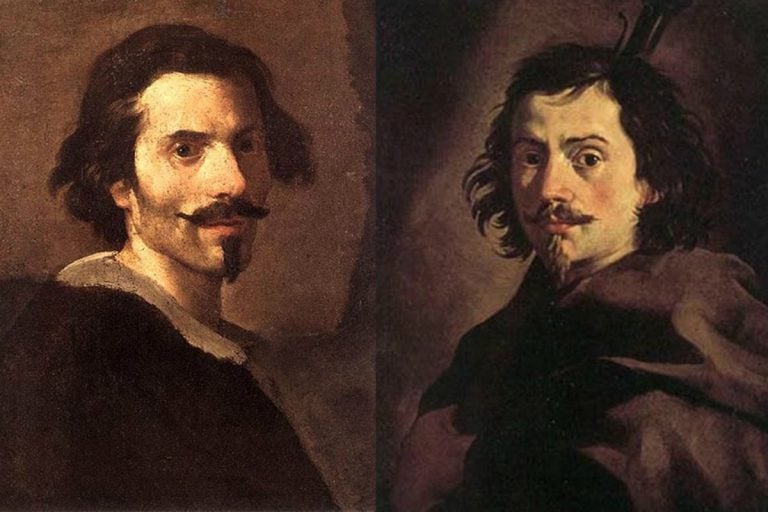 The Artist and the Eternal City: Gian Lorenzo Bernini’s Career in Rome

“Bernini vs Borromini” could be the main headline on today’s newspaper – a lawsuit, fascinating dispute, or even political elections. It has stirred a debate and, very much like contemporary election campaigns, low blows and scorn were not spared. However, this article is about the rivalry between two men who reshaped Rome’s silhouette in the 17th century. Come and read of Gian Lorenzo Bernini vs Francesco Borromini!

Gian Lorenzo Bernini was born in December 1598. Nine months later, Francesco Castelli (later Francesco Borromini) came into the world. They were peers and both destined to create wonders. However, their situations were very different. Bernini was a son to a sculptor, Borromini to a stonemason. “Not that different so far!” you might object. Yet, their personas couldn’t have been more divergent if they tried. Bernini was outgoing, self-confident and flamboyant, while Borromini was shy, suspicious and irascible.

And as Bernini was declared a prodigy by the age of 9, summoned by cardinals and fondled by popes, Borromini quietly learned his father’s trade, away from all the clamor, far from Rome’s spotlight. Undeniably, this is a story of “introverted underdog meets extroverted superstar”.

The two main characters of this Baroque tale crossed paths in the big city, when they were both in their late 20s. When Borromini arrived in Rome in 1619, Bernini was already an affirmed sculptor of the Roman scene, after giving birth to an astonishing number of gorgeous statues and sculptural groups. To name just a few: Apollo and Daphne (picture above), Neptune and Triton, Proserpina’s Rape and the ground-breaking David (picture below).

In the northern city of Milan, where he lived before moving to Rome, Borromini had learned and practiced stonemasonry since the age of 9. He frequented buzzing construction sites and inspiring environments, such as the Veneranda Fabbrica del Duomo di Milano (aka the very fancy institution founded in the 1387, responsible for the keeping and development of the Cathedral of Milan). He was certainly not as notorious and breezy as Bernini, but he certainly was as ready and eager to be commissioned as the other one was!

In 1627 Francesco’s uncle, architect Carlo Maderno, was commissioned the extension of a palace that Maffeo Barberini (Pope Urban VIII) had just bought from Cardinal Sforza. Thankfully, our “underdog” could count on some help here. So, Borromini participated in Maderno’s project, together with our “superstar”, of course, and other prominent names, such as Pietro Da Cortona.

Our two marble magicians worked together on Palazzo Barberini, but briefly and not without drama. In 1629 Maderno died, leaving the position of Chief of Constructions vacant. Borromini had been working close to his uncle for two years and would have been a well-prepared successor.

Sadly for him, it was not meant to be. Urban VIII was a diehard fan of a certain brilliant sculptor. He made no secret of it and appointed Bernini as new chief. Not without cause, I would like to add! According to historical sources, Bernini had a dashing personality, very pleasing and charming with all his commissioners. He also carved pulsing, lifelike figures from hard, inanimate materials as no one before him. Anyway, as we can imagine, being pushed aside must have been rather unpleasant for a certain brilliant architect…

Now, after such preamble, it won’t surprise you to know that this chisel-off did not end there! Their first collaboration ignited a dynamic that lasted for nearly two decades, as Urban VIII openly preferred Bernini to all others. The situation for Borromini changed when the next pope rose to power, in 1644. Innocenzio X despised his predecessor and the whole Barberini family. So much so that all those who availed of Urban’s favour, under this new pope, were cast aside. And that included Bernini.

Many anecdotes involving these two artists’ rivalry started as gossip in the 17th century and turned into urban myths as centuries passed. They add spice in each and every guided tour around the Eternal City. A smart guide wouldn’t dream of leaving these captivating tales out! Such as the one about the donkey ears and the male reproductive parts. Now I have to follow my own advice and tell you about it! Long story short: under Innocenzio X, Borromini took over the renovation of the Propaganda Fide Palace, that was initially commissioned to Bernini by Urban VIII. Coincidentally, the fallen superstar was residing in a building right in front of Borromini’s construction site…

Therefore, what did these two esteemed artists do, strong in their skills and mastery, about their proximity? They pulled out their chisels, of course. No holds barred. Borromini had a pair of donkey ears sculpted on the palace under construction and Bernini adorned the façade of his house with male genitals, pointing right at the construction site. Sadly, these improvements are no longer there. As you can imagine, not very long after they were showcased by the two artists in the name of loathing, they were promptly removed by the authorities in the name of decorum.

Cry Me A River (Or Four)

Among the stories that the aforementioned guides know so well, possibly the biggest one revolves around Bernini’s Fountain of the Four Rivers and Borromini’s façade of Sant’Agnese in Agone. We are talking about a theatrical fountain at the centre of Piazza Navona (built with revolutionary audacity around and above an arch) and a Baroque church beautifully positioned right in front of it.

Around Bernini’s composition, we can appreciate the anatomical beauty of four male figures, representing the four longest rivers in the world: the Ganges, the Danube, the Rio de la Plata and the Nile. The last two rivers are at the centre of this urban myth. In the picture above, on the left, we can see the Rio de la Plata. He has his left hand raised, as if he was trying to protect his face from Sant’Agnese in Agone façade’s impending collapse. And the Nile, in the picture below, has a drape over his eyes. Gossips would have us believe that Bernini found Borromini’s church ugly. Hence the mockery of the statue’s gesture.

The same Roman gossips would say that Borromini didn’t sit back and watch. Instead, he placed a lonely statue of Saint Agnes on the façade, at the base of the bell tower, with a reassuring hand placed on her chest (in the picture below). That should mean that the church and its front are solid, well built and not on the verge of crumbling down. We can almost hear her saying: “sleep tight, Rio de la Plata. I got you covered”. Also, she looks away from the fountain. Maybe because Borromini did not like Bernini’s work either? In which case Saint Agnes would be saying: “Ew.” instead, and so on. This could turn into a Dan Brown book real quick.

Of course hunting for hidden signs and meanings is amusing, but it can be rather misleading. Even in a story of a documented rivalry such as this one. Both the fountains and the church were independently designed and built. Just consider that the fountain was completed and unveiled to the public before the church’s façade was. In regards to the Rio de la Plata dynamic pose, Baroque was about movement and vigorousness. A very organic choice from Bernini, then. About the Nile, the source of the river hadn’t yet been geographically located during the time of our two masters. So the veiled eyes are allegorical.

I would like to be sentimental and idealize Bernini and Borromini’s joined artistic fate. However, based on the writing left by their contemporaries, very little they had in common, but their innate talent. One might think that Rome could offer to all plenty of opportunities, with its endless sea of domes to build and its incessant face-change, following the continuous succession of each and every pope who strived to leave a mark. Instead, it would seem that Rome was just not big enough! They even ended up being bad neighbours…

To be sure, it would be inaccurate to think that Bernini and Borromini created glorious buildings and monuments only to mock one another. However, sometimes creation might not come from the whispering of muses in the artist’s ear, but from shouts of persiflage and derision in the artist’s face. Not poetically descending from the skies, but rather earthly boiling up from bile. Well, maybe a bit of both? Between history and legends, there lies the truth of this rivalry set in stone.