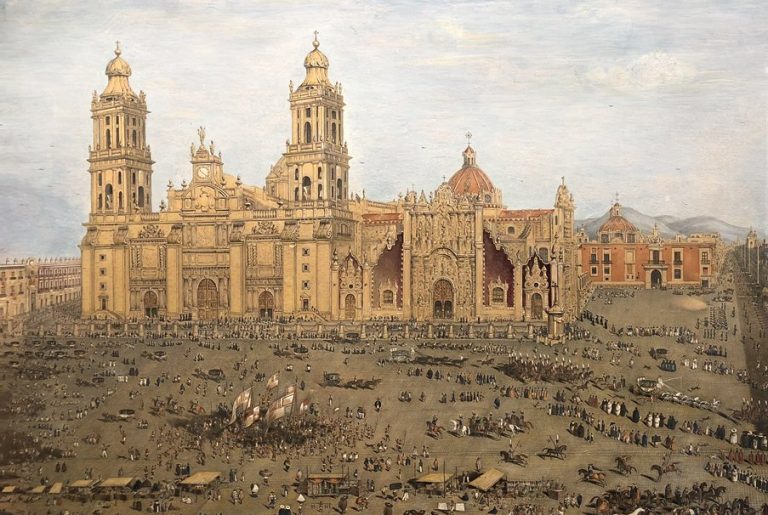 The 19th century was a tumultuous time for Mexico, to say the least. In 1821, it achieved its independence. However, the war devastated the country in every aspect, including the artistic one. As a consequence, there was a lack of Mexican artists during the first moments of the new nation. The situation allowed foreign artists to flourish. They came and produced paintings and books detailing the costumes and landscapes of the territory. Let’s meet some of them and travel around Mexico through their works.

Mexico achieved its independence on September 21, 1821. It had been an 11-year war that devastated the country– economically, socially, and politically. Moreover, there were different factions supporting their own plans for the nation. The result was tremendous instability during most of the 19th century. Just between 1823 and 1877, there were 70 changes in the Executive power and 11 constitutions. Furthermore, Mexicans had to figure out their national identity.

In addition to the internal struggles, Mexico endured several foreign interventions and loss of territory. Starting with the former conquerors, Spain tried to reconquer Mexico until their defeat in 1829. By then, Central America had separated. In 1836, Texas unilaterally declared its independence. Two years later, the French invaded for the first time. A decade later, Texas’ annexation to the USA, plus a border incident, sparked a war. The conflict led to the loss of more than half the territory in 1848. Lastly, France returned and helped install an Austrian emperor, Maximilian of Habsburg.

In 1780, the Academy of San Carlos was founded in today’s Mexico City. Unfortunately, by 1821, the institution was in precarious condition. There were no teachers, no students, and barely any funding.

We can find a few art pieces during the first moments of the victory. Nonetheless, they showed technical issues and some artists chose to stay anonymous.

Between 1799 and 1805, German scientist Alexander von Humboldt traveled to America. Everywhere he went, he took notice of the people, the costumes, and the landscapes. His visit to Mexico (1803-1804) was no different. From these experiences, he published multiple books with descriptions and drawings that impressed the European audience. Many traveled to see for themselves those “exotic” places.

Artists were inspired too. The landscape genre was acquiring singular importance in the Western tradition and the American continent provided new subjects to depict. And since there were no prominent Mexican artists, they easily entered the scene. Many cultural magazines ended up using their works and their explorations resulted in amazing rediscoveries. As Humboldt did, they produced illustrated books

Octaviano d’Alvimar, First a Spy, Then a Painter

Octaviano d’Alvimar was one of the first traveling artists in Mexico. However, his primary concern was not the landscape. He arrived in 1808 under the order of Napoleon I for a secret mission. He arrived in Texas and was imprisoned. In Guanajuato, he met two national heroes, Miguel Hidalgo and Ignacio Allende, and raised suspicion of his conspiracy for which he was expelled. Later, he returned once more after the independence war concluded (1822-1823). This time, he offered his services to Augustin de Iturbide (Mexico’s future emperor). Nonetheless, he left after joining a group of conspirators.

View of the Major Plaza is arguably his best work. It depicted Mexico City’s plaza during a day of celebration, possibly the day Iturbide instituted the Imperial Order of Guadalupe on August 13, 1822. Others think it can represent Iturbide’s day of coronation on July 21, 1822. Presumably, the white carriage about to enter the National Palace was his.

Moreover, he managed to portray several social classes with remarkable detail. We can see rich people, merchants, religious orders, soldiers, and more. Additionally, the Metropolitan Cathedral features prominently, and the Imperial flag waves at the top of the Palace. One last curious detail is that he omitted the statue of Charles IV at the center of the plaza, perhaps indicating the total independence of the country.

Elizabeth Ward (1798-1882) arrived in Mexico in 1825. Her husband was the British ambassador, Sir Henry George Ward. As part of his diplomatic mission, he sought opportunities for British mining investments. This meant traveling around the country. Thanks to that, Ward produced paintings and engravings depicting Mexican landscapes. In 1829, she published Six Views of the Most Important Towns and Mining Districts. Several publications in Mexico reproduced her works.

Claudio Linati (1790-1832) was an Italian traveling artist who came to Mexico in 1825. He was a pioneer of lithography in Mexico and he established the first press of its kind in the country. Mainly, he focused on traditional scenes that reflected Mexican costumes and everyday life. In 1828, in Brussels, he published his own book titled Mexican Civilian, Military and Religious Costumes.

However, he also produced some of the first images of the national heroes. The lithograph of Miguel Hidalgo is curious. Linati showed him holding a cross, however, his clothes make him look more like an Italian gaucho than a Mexican priest. According to Justino Fernández (Mexican art historian), Linati “was the first foreigner in discovering the beauty of the Mexicans and even of the coastal blacks” and “praises the Mexican Creole for having bravely given his blood for Independence.”

Johann Friedrich von Waldeck (1766-1875) was a painter and engraver in Prague who came to Mexico in 1826. He focused on the Mayan zone, meaning the Yucatán Peninsula. Unfortunately, he looted the zone and sent pieces to Europe. For this, he was forced to leave the country. In Paris, he published Picturesque and archaeological trip to the province of Yucatán between 1834 and 1836. His book also caused him problems in Mexico.

The language that he used expressed contempt, from the descriptions of everyday life to the titles of his lithographs. Mexicans considered these expressions offensive and critics deemed him a bad traveler. Nonetheless, due to the quality of Waldeck’s work, his images were used in publications. However, the editors made a few modifications. For example, one of his images titled “Smuggler Inland Indian” appeared in the magazine as “Yucatecan Indian”. The silver lining to him and his antics was that his actions sparked the defense of Mexican cultural heritage by authorities and writers.

Contrary to Waldeck, Carlos Nebel (1805-1855) loved Mexico. He was a German artist who arrived in 1829 and stayed until 1834. Back in Paris, he published Picturesque and archaeological journey on the most interesting part of the Mexican Republic, in the years from 1829 to 1834. He, too, collected archaeological pieces, but his actions didn’t cause him trouble.

However, a controversy regarding the rights of his works brought him back. He translated his book and promoted it greatly in Mexican newspapers. Regardless, it was expensive so it is probable that very few people bought it. Moreover, he and an American reporter, Kendal, published The War between Mexico and the United States. In it, there are some of the best works regarding the war.

Daniel Thomas Egerton (1797-1842) was another British painter who came in the 1820s. He was already accomplished in his country. But it seems like his personal problems made him a traveling artist. He left his family behind and came with his young mistress, Agnes Edwards (already pregnant). They lived a secluded life. In fact, they changed their names to “Florencio” and “Ines”. He briefly returned to England and published Views of Mexico by Egerton in 1840.

Tragically, the couple was murdered two years later. The motive of the crime remains a mystery. Officially, it was a robbery gone wrong. Yet, there were inconsistencies in such a theory. For starters, both Egerton and Edwards still had valuable objects with them when they were left for dead. The investigation led to the arrest of three supposed thieves. There are many speculations surrounding the crime, from espionage accusations to jealousy motives. In any case, Egerton left breathtaking views of the Mexican landscapes.

Frederick Catherwood (1799-1854) is yet another British traveling artist who came to Mexico. His trip was sponsored by John Lloyd Stevens (American). Together, they traveled all around the Mayan zone. During their colonization, Spanish authorities paid little attention to the ruins. In the southeast region, the jungle quickly hid all the pre-Columbian constructions. Catherwood and Stevens rediscovered many of those cities.

From this trip, they published Incidents of Travel in Central America, Chiapas and Yucatan, and two other books with similar thematic. Catherwood’s images appeared in Mexican magazines.

Definitely, this is just a taste of all of the traveling artists that came to Mexico. As the intro says, this was just the first generation. Also, some of them went to other countries in South America. It might seem ironic, but these foreigners helped with the construction of Mexican national identity. They brought attention to the country’s landscapes and the archaeological ruins reminded Mexicans of their Pre-Columbian past. Additionally, they introduced lithography and disseminated their images throughout Europe.

Furthermore, the controversy around the traveling artists in conjunction with all the conflicts with other countries sparked the nationalistic sentiment. It pushed Mexicans to produce their own images and books. Still, the European artistic tradition was here to stay. In 1843, President Santa Anna reinstated the Academy of San Carlos. This allowed Mexican men to acquire the artistic instruction that they needed. However, the first teachers of the school came from Europe, leading to another generation of traveling artists. But that’s another story.