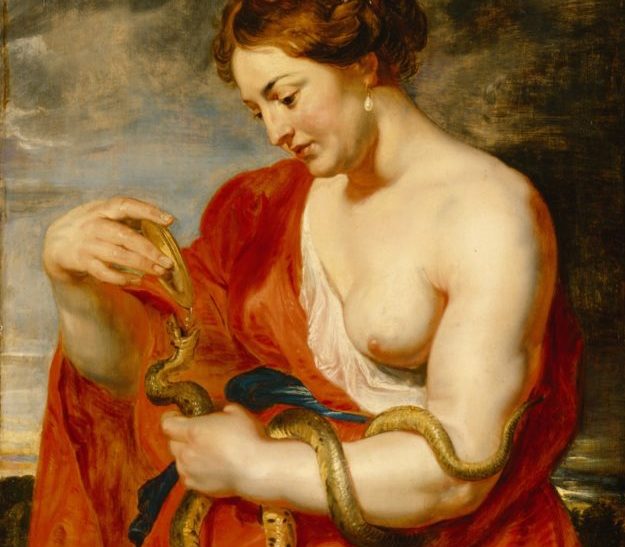 The recent row over the Cannes poster featuring a famous actress Claudia Cardinale, who was slimmed with photoshop by poster designers

made me think about our perception of beauty and ideal body size. A reflection that we still perceive skinny as the closest to perfect, prompted me to present you with beautiful XXL women from art history.

The only thing that art historians can be picky about when talking about Michelangelo, is his technique of depicting women. Some even dare say that he COULDN’T PAINT FEMALE BODY, because all his women have nothing to do with ethereal Botticelli’s primaveras and venuses. Instead, they are always muscular and giant, different from his men only by the long hair and more feminine faces. Yet, I think Michelangelo was simply the first guy supporting female bodybuilding.

This picture is definitely a picture of good health (forgive this awful pun). Hygeia was the daughter of the god of medicine, Asclepius, who is depicted here in his symbolic form of a serpent, and she was a patroness of good health, hygiene, and sanitation. For Rubens and his contemporaries healthy woman was a chubby woman, and therefore he painted solely healthy women – remember my favourite Venus? She was fit as a fiddle! Rubens was definitely right: skinny doesn’t always mean healthy.

Sexy Size (and it’s not XS)

Courbet, as a founder of Realism, wanted to paint only real women of his age and not the ‘improved’ goddesses of the Academic artists. To make the situation worse, he often chose the popular theme of bathers or sleepers to show them naked. The reviewers had no mercy for his technique, nor for his figures whom they called disgusting and ugly. I guess this way they just wanted to hide that in reality they found them pretty seductive and sexy.

Jenny Saville’s art can be characterized as art of exaggeration, as she often expands, inflates, distorts the bodies she depicts, in order to make us look at a body with new eyes. Why did she call this one Trace? Is it because obese people, or in more general terms people who do not conform to the beauty canons, are often just a trace in our societies? Is it why her model is not facing us, as we often look at obese people through the lens of their bodies only? Food for thought.

As powerful as a hurricane

The Hurricane Woman was made following Storm Man, as a homage to the survival of humanity in the face of the destructive force of the Second World War. She is the embodiment of strength, vitality and life, she is a woman who firmly stands on her strong legs and proudly presents her abundant bust. She is looking bravely into the future, and I hope that all of you are, no matter what size you are wearing.