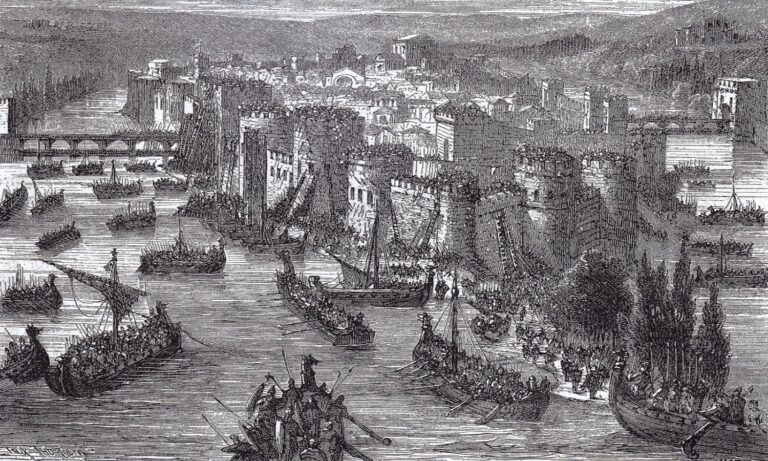 Vikings and their culture have interested us since their days of domination. There are TV shows about them and sports teams named for them. Nordic culture and mythology permeate the media with superhero characters like Thor. Meanwhile anime series such as Attack on Titan utilize Norse mythology in their story lines. Viking history and Viking art represent something epic, in a sense. For the centuries since their exploration and reign in the known world, the Viking has garnered the constant attention of academics, comic book aficionados, and people of all ages in general.

Whatever their involvement in history, the Vikings left a lasting impact in their wake.

A Brief History of the Vikings

The Vikings were active from roughly 793-1066 BCE. The Viking Age was a period in European (Northern European and Scandinavian) history which followed the German Iron Age (400-800 AD). During this period, Scandinavian Norsemen explored Europe by its seas and rivers for “trade, raids, colonization, and conquest”. It is safe to say that their interaction with the world around them vastly changed the course of history.

The term “viking” stems from the word for “pirate” in early Scandinavian language. Since the Vikings were from the Northern European peninsula, the term took on different meanings in each language and culture. The term ‘Viking,” as we know it today, comes from the period from the 8th to the 11th centuries when the Vikings were on the path to conquest and colonization.

As an extension of their unique history, Viking art has an enamoring quality.

When Viking Art Becomes the Grave: The Preservation and Restoration of Centuries-Old Artifacts

The Museum of Cultural History in Oslo has several examples of preserved and restored Viking longships and artifacts which were previously used on the sea but eventually returned to land to act as the burial place for their owners. Ranging from full-scale restorations to merely parts of the ship re-pieced together, the Museum showcases three main ships. These ships were more than likely a part of the vast maritime technology of the Vikings, allowing them to reach multiple continents centuries before the Age of Discovery. In that era those in power sought to race others for exploration and colonization of the ‘unknown’ world.

The Gokstad ship, while less threatening in appearance now, would have been a site to behold on the seas in which it sailed. Upon its discovery, archaeologists found 32 shields attached to the sides of the ship itself. At roughly 16 feet across and 76 feet long, the Gokstad was able to carry upwards of 34 men.

Scholars believe that grave robbers took many of the items from the burial. Although much was missing, much still existed by which the nature of burial and status of the deceased could be assessed. Among kitchen utensils and 64 shields, there was a “gaming board with counters of horn, fish-hooks and harness fittings made of iron, lead, and gilded bronze, six beds, one tent, a sleigh and three small boats”. Like other burials in neighboring cultures of the time, archaeologists also discovered animals ranging from horses and dogs to the exotic peacock.

Much like the Gokstad ship (above) and the Oseberg ship (below), various items are believed to have been buried with the deceased: horses, weapons, and utilitarian items such as a saddle were documented from this ship. The Tune ship was discovered in 1867, outside of modern archaeological techniques. As a result much of what was documented or found never made its way into the museum. It was the first Viking ship to be discovered but it is less put together than the other well-documented collections.

The Oseberg ship, both a sail boat and used for rowing, would have held up to thirty oarsmen. The ornate decoration of this particular early 9th century ship leads scholars to believe that it was reserved for someone of more aristocratic status. From the spiraling serpent heads at each end to the animal designs that decorate the sides of the oak and pine ship, no detail was spared.

As a grave, the Oseberg ship held two women of significance. A full list of the items in the burial chamber with the women and ship can be found here. It is an extensive list that ranges from food items to animals and appears much more extensive than the lists of the two ships above.

Barbarians: Were They or Weren’t They?

If we take a look at the actual art work of the Vikings, specifically looking at the utilitarian pieces such as buckles, swords, or ships, it is quite easy to see that they did not earn the title ‘Barbarian’ because of their art work. More so, it was because of their brute force and domination of the seas and places they pillaged. BUT, if we go based off their art work, it was much more progressive than the term ‘Barbarian’ would have us believe.

The oval brooch shown below is only 11.4 x 7.5 x 4.3 cm in size. It is large enough to be a clothing fastener for women in the Viking community. Classified in the metal-work and copper department, the animal heads adorning the front of the brooch would originally have been covered in some goldwork (even though gold was not as common as silver in Viking culture).

The sword shown below was discovered in Langeid, Norway. Measuring 91 cm in length, this mostly-preserved sword is one of several thousands recovered over the years. What makes this sword unique are the mystical signs on its hilt and pommel which differ from earlier-known examples where there is little to no decoration. The symbols on this sword can be linked to Christianity through the use of Latin letters. However the Museum has yet to clarify the true meaning of everything as this is a recent find.

Roughly 9 years ago, I visited Lake Tahoe, CA/NV with my husband. Amid the vacation homes and ski resorts of the mountain town lies a Viking-inspired home. The home is only accessible by boat or a 1-mile hike down a rather steep hill. It was completed in 1929 after the owner, Lora J Knight, saw Emerald Bay on which the land sat and was reminded of a Scandinavian fjord. Her nephew by marriage and Swedish architect, Lennart Palme, designed the home. During their 1928 trip to Scandinavia, Palme and Knight gathered many ideas for what would become Vikingsholm.

Old wooden churches, stone castles, and rural homes provided them with much inspiration which Palme directly translated to this now 90-year old home.