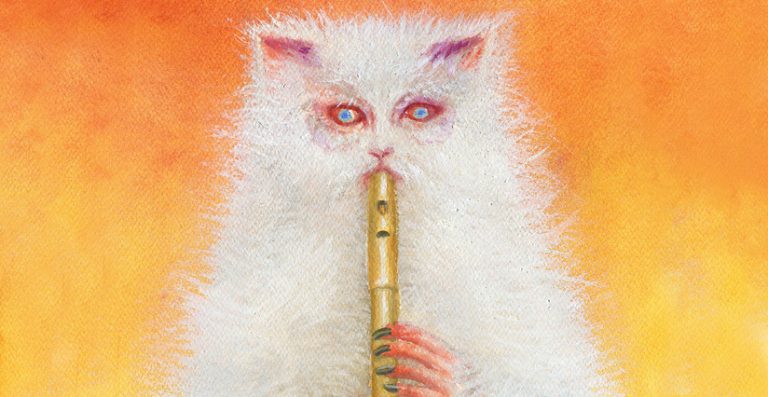 Immerse Yourself in the Magical World of Maria Anto

Aleksandra Waliszewska was born in 1976 in Warsaw. Upon graduating the city’s Academy of Fine Arts, she quickly became one of the most recognized contemporary painters of the Polish new art scene. Her list of accomplishments contains more than 20 solo exhibitions, an Arco Madrid Grand Prix, the EXIT magazine award, the Polish Ministry of Culture and National Heritage scholarships, cooperation with international artists and art groups, and a short movie inspired by her art.

Among the Warsaw art world, Waliszewska is known for her workaholism. However, it seems to be more of a cathartic process of unleashing imaginary tales to the canvas surface. As she says herself in an interview for KnockMag:

Every time I paint, I am on the edge of saneness.

Her works are simultaneously subconscious and full of visual culture afterimages. The works are rarely titled nor explained, leaving the viewer unaided in the mad world of small and big stories of horror.

I don’t think in all my time I have seen such a consistently terrifying vision of the subconscious world.

In Praise of Aleksandra Waliszewska, The Vampire’s Wife.

Creatures of the Night and Existential Dread

Because Waliszewska doesn’t title her artworks, it’s up to the viewer to find their own meaning. Paintings and gouaches become mirrors in which we find our own fears and anxieties. Wounds, blood, skulls, and the Grim Reaper himself commonly visit the artist’s studio. These themes often reach into the vast iconography of Death in art history, from Danse Macabre woodcuts to Polish Symbolist’s fear of mortality.

Ghastly creatures are also typically derived from Balto-Slavic mythology, with nightmarish upiór (loosely from Polish: phantom, ghost) at the forefront. However, together with mythological creatures, we find all kinds of monsters – aliens, spiders, phantoms… or little girls. You choose what you fear the most.

Cats are definitely the artist’s favorite animal. Her late cat, Mitusia, is her biggest muse and source of inspiration. That’s not surprising – cats are not only fantastic models, but also one of the primary animals associated with whatever is demonic or hellish. Waliszewska’s cats have a life of their own smoking cigarettes, performing rituals, playing instruments, battling, or just staring right deep into your soul. Or nibbling on your intestines… you know, typical cat things!

Cats and demons are not the only protagonists in Waliszewska’s gloomy world. Interestingly, she rarely paints male figures, if anything, making them bystanders or perpetrators. Here’s where she cuts ties from her symbolist forebears – whether mermaids, maidens, or madonnas, female protagonists in her works are free of the evil feminine trope and the male gaze. Her heroines are both victims of dreadful scenes of sexual torture, but also violent hunters, innocent and seductive, taking revenge on their abusers.

The artist’s large social media presence resulted in quick popularization of her unique style in similarly gloomy artistic genres. Especially worth mentioning are album covers (not surprisingly, mainly heavy metal) and film posters. My personal favorite is the artwork promoting a masterpiece of a movie itself, the international poster for Agnieszka Smoczyńska’s The Lure (2015).

Waliszewska drawings also inspired a short art house movie, The Capsule (2012), directed by Athina Rachel Tsangari and co-written by the artist. The film describes itself as a “Greek gothic mystery”, and tells the story of seven young women trying to negotiate the cycle of womanhood. Waliszewska also found her way to fashion, collaborating both with Susie Cave (The Vampire’s Wife) and Joanna Hawrot.

At the moment of writing this article, there is an exhibition of Waliszewska’s works on at the Museum of Modern Art in Warsaw. The Dark Arts: Aleksandra Waliszewska and the Symbolism from the East and North is the artist’s most extensive display so far. Her works are juxtaposed with historical works by other, mainly symbolist artists. It highlights one of Waliszewska’s main artistic strengths – her true love for art history.

The exhibition itself will be a wonder for any fan of the dark and gloomy. It features impressive works by artists such as Mikalojus Čiurlionis, Bolesław Biegas, Edward Okuń, Kristjan Raud, Maria Anto, and many more. While incredibly pleasant to the eyes, the presentation itself lacks curatorial information. The contrast between Waliszewska’s and other artists’ works is not clear and, except for highlighting some common themes, doesn’t provide any descriptive information on the historical perspective. A viewer not deeply rooted in the art history world and unfamiliar with the artist’s style might have issues telling which of the presented works are Waliszewska’s and which are not, nor what the basics of this visual universe are. There is also not much information on the artist herself, so if you want to dive deeper it’s recommended to check out the exhibition catalogue or join one of the curatorial walks.

What is worth noticing though, simultaneously exhibited are artworks by Waliszewska’s family members – her great-grandmother Kazimiera Dębska, a fairytale writer, her grandmother Anna Dębska – a postwar sculptor with a shared affinity for felines, and the artist’s mother, Joanna Waliszewska.

The exhibition The Dark Arts: Aleksandra Waliszewska and the Symbolism from the East and North can be seen at the Vistula river branch of the Museum of Modern Art in Warsaw until October 2nd, 2022. Please note that some content presented may be inappropriate for younger visitors.