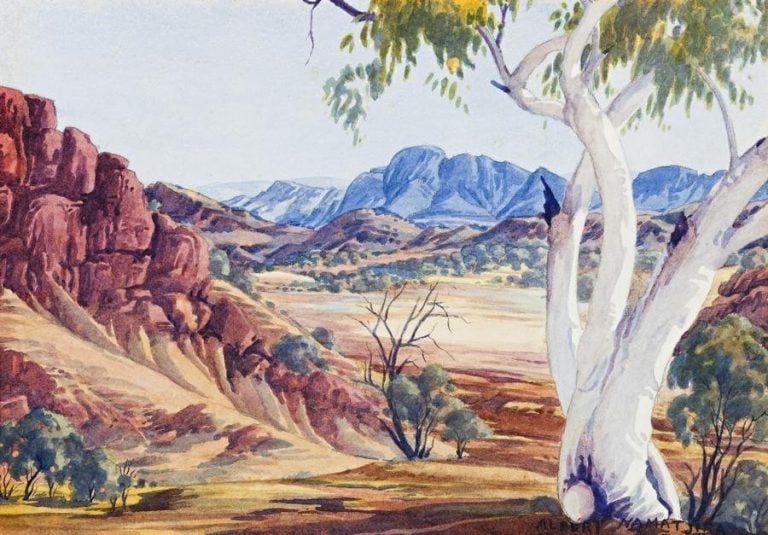 5 Things You Need to Know About Australian Impressionism

In a time when the Australian government imposed a highly discriminatory policy on Aboriginal people, Albert Namatjira (1902-1959) conquered the art world of his continent. He is often included among the greatest artists in his country. Having lived on a mission and being in contact with white artists, he adopted Western tradition for his watercolor landscapes. Unfortunately, his success as an artist did not save him from the deep racist laws that existed at the time. In fact, he fought against them and had a few victories. For instance, he became the first Indigenous person to get Australian citizenship, together with his wife. Moreover, he initiated the movement called the Hermannsburg School. Plus, he started an artistic dynasty that lasted decades.

Growing Up in the Mission

Albert Namatjira was born in 1902 in the Northern Territory, specifically in the MacDonnell Ranges in Central Australia. He belonged to the Arrernte people and moved to the Hermannsburg Lutheran Mission. There, he and his parents adopted Christianity and were forced to live a Western lifestyle. In fact, his birth name was Elea, but as it happened in missions, they changed it to an English name after his baptism. Actually, his people did not have surnames, so he was only known as Albert. Namatjira was his father’s name which he began using as a surname until 1938. However, they still retained many Aboriginal traditions, such as their language.

When he was 13 years old, he went through an initiation ritual: he spent six months in the bush and learned the traditions of his people. When he was 18 years old, he married Ilkalita, whose Christian name became Rubina. This decision caused him trouble as the indigenous communities had a system of kinship based on skin groups. As such, Ilkalita belonged to a group into which he was not supposed to marry. For this reason, they eloped and he started working as a camel driver elsewhere. They ended up having eight children: five sons and three daughters. Eventually, they came back to his mission, and she was baptized.

Since he was a child, Namatjira showed interest in sketching his surroundings. While he was at school in the Mission, one of his professors liked watercolors. Therefore, it is probable that this was his first approach to this technique. Namatjira did not begin his artistic career immediately, but it did ascend quickly. He kept working in non-artistic jobs trying to support his family. Once he came back to the mission, he realized the potential the souvenirs market had. So, he began making decorated artifacts. In this way, his work became more art-oriented. During World War II, he continued selling his creations to soldiers.

Additionally, white artists would often visit the Mission. In 1934, Rex Battarbee (1893-1973) exhibited a few of his works, leaving Namatjira amazed by them. Moreover, it inspired him to fully pursue a career as a painter. The two men made a deal. With Namatjira’s experience as a camel driver, he could work as a guide to Battarbee and his friends to find new landscapes to depict. In exchange, Battarbee gave him art lessons. The idea worked and the two men formed a long-lasting friendship.

The Unique Style of Albert Namatjira

Namatjira proved to be an excellent student and a highly prolific artist. By 1938, he was heading his first exhibition in Melbourne. It was composed of 41 pieces and it sold every single one of them in just three days. Namatjira’s style was a combination of Aboriginal and Western elements. His use of ochre comes directly from Aboriginal art. Additionally, many of his works feature ghost gums. These trees are endemic to Central Australia and could represent the ancestors but also the presence and absence of water. This was a particularly important issue, as the mission suffered droughts constantly. Actually, in the 1930s, Violet Teague (1872-1951) and other artists organized an exhibition to raise money for a pipeline that would take water to the mission.

On the other hand, he took elements from European tradition. First off, he used watercolors. And second, his use of saturated colors comes also from those modern techniques. This unique mix of traditions made him widely appealing.

From then on, Albert Namatjira became an important name in the Australian art world. He was a true celebrity. There were documentaries about him, photographers followed him, people waited for his autograph, and his exhibitions sold out. Everyone, no matter their ethnicity, loved him. Even Queen Elizabeth II was a fan and granted him the Queen’s Coronation Medal in 1953. Two years later, he became an honorary member of the Royal Art Society of New South Wales. In 1956, his portrait by William Dargie won the Archibald Prize. It was also the first winning painting that depicted an Aboriginal person. The income from his art allowed him to help his entire community of approximately 600 people.

Unfortunately, even being a talented, famous artist, he could do little against the strict laws that discriminated against Aboriginal people in Australia. Although he was earning good money for his art, he still did not have much agency. He could not lease a cattle station nor build a house in Alice Springs. But here is where the power of fame entered. Being a recognized painter, his experiences cause indignation among people. And as public opinion can be a powerful tool for change, Namatjira and his wife became the first Aborigines to get Australian citizenship in 1957.

Sadly, that victory was not enough to receive equal treatment and respect. One of the policies of the white government was the restriction of alcohol to Aboriginal people. It was a paternalistic law that treated people like children, incapable of making their own decisions. Due to his new status as a citizen, Namatjira was exempt from that prohibition. In 1958, Namatjira was charged with supplying alcohol to members of his ethnic group. Therefore, he was taken to prison even after denying the charges. The justice system failed to give him fair treatment and popular indignation only helped to reduce his sentence. In the end, he spent two months in jail. Tragically, he died only one year later.

While Namatjira died, he left an incredible legacy, both in art history and in the fight for the right of the Aboriginal communities in Australia. After the success of his first exhibition in 1938, other members of the Arrernte people in the Hermannsburg Mission followed his lead. The movement started in the 1940s and lasted until the 1970s. In fact, the news of his death and its circumstances only sparked more interest in the work of his colleagues. Like Namatjira, they specialized in watercolor landscapes from Alice Springs. The group consisted of mostly men, but there were at least two women. In fact, Cordula Ebatarinja (1919-1973) became the first female Aborigine artist to develop a successful career.

The Legacy of Albert Namatjira

His impact on the history of Australia cannot be underestimated. And, his actions for the rights of his community opened the door for a wider fight for the rights of the Aboriginal people. Moreover, his works have been featured in postage stamps for several years.

Lastly, he was an inspiration for many other men and women. In fact, he started a dynasty of talented artists. His children, grandchildren, great-grandchildren, and other relatives continued painting. They also have worked hard to preserve Albert Namatjira’s memory. They just won a battle to regain the copyright of his works. Since many of them still live in poverty, this was an incredible victory as they will receive income from it. Finally, he is considered a precursor of contemporary Aboriginal art in Australia.

“Introduction”, The Hermannsburg School of Modern Art. Accessed on 6 Feb 2022.

The Incredible Journey, “Albert Namatjira: The Man who Captured the Heart of Australia”, 9 Jul, 2021, Youtube. Accessed on 3 Feb 2022.