5 Things You Need to Know About Australian Impressionism 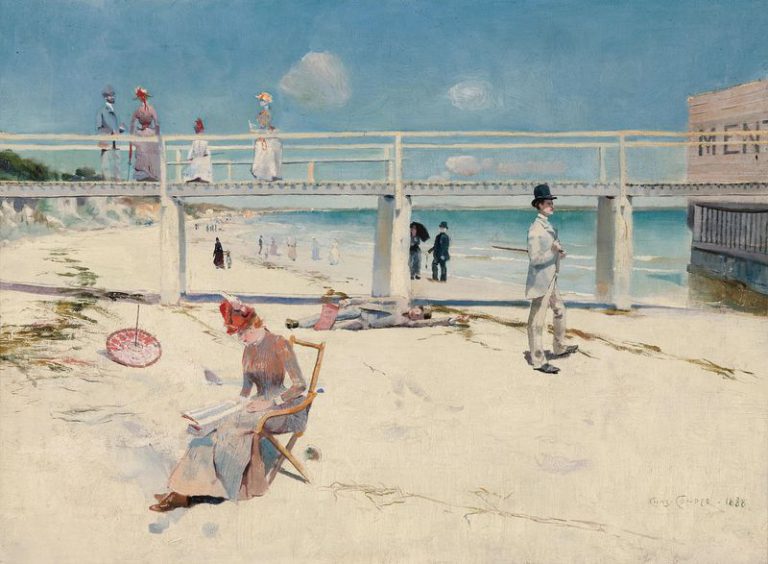 1. The first exhibition had works painted on cigar box lids

The 9 x 5 Impressionism Exhibition of 1889 got its name because the artists painted their work on the lids of cigar boxes, which measured 9 x 5 inches (22.8 x 12.7 cm). Australian Impressionism artists in the late 19th century, much like French Impressionists, were interested in capturing the changing nature of light as well as depicting modern scenes. They painted outdoors (“en plein air” as the French said). Their depictions of the hot glaring light in Australia set against a blue sky, as in Conder’s Under a Southern Sky, allowed these artists to put their own spin on the Impressionism movement.

2. They were known as the Heidelberg School

The artists who took part in the 9 x 5 Impressionist exhibit – Tom Roberts, Arthur Streeton and Charles Conder – formed an artist camp in Heidelberg, now a suburb of Melbourne. They lived in a farmhouse for two summers and painted outside. Even though they were not part of an official academy or school, these Australian Impressionism artists became known as the Heidelberg School.

3. They helped create a national identity for Australia

Prior to the late 19th century, there were few art collectors and art schools in Australia. Before the Heidelberg School, most Australian artists were British immigrants who found their new country an unattractive subject matter for art. Instead they often painted landscapes with colors and vegetation more reminiscent of Europe than Australia.

In contrast, the Heidelberg School artists tapped into a burgeoning sense of national pride in Australia by depicting the country as it actually was. The light in Australia has a different intensity and these artists strove to depict its beauty. Roberts’ Shearing the Rams is a beloved example of this new art, where the Australian light illuminates the excitement and energy inside a timber shearing shed.

Jane Sutherland was born in New York, Sutherland’s family moved to Australia when she was 11. She was friendly with the other male Australian Impressionists and was invited by McCubbin and Roberts to paint at Box Hill Camp with them. As a respectable 19th century woman, she could not spend the night at the camp with the men, so instead she would take day trips to the camp and paint outdoors. Less well-known than her male colleagues, her work was not represented in public collections until the 1960s. Sutherland’s paintings often featured children, such as Obstruction, Box Hill where a young girl stops and looks at a large cow blocking her path to school.

5. They captured the unique beauty of Australia

Whereas earlier artists saw Australia as a dry and rough place, too different from Europe to be attractive, the Heidelberg School artists portrayed the country as it really was. They combined the Impressionist’s desire to capture modern life with the Realist inclination to celebrate the life and work of rural laborers. In McCubbin’s 1896 work On the Wallaby Track, the viewer sees a traveling family on the outskirts of a property in the bush, resting after spending the day looking for work.

At the end of the 18th century, the British empire added Australia to its territory. Since the famous arrival of Captain Cook white people have...

Separated by oceans and the present host of political and social barriers, Australia isn’t an easy jaunt away for a quick art appreciation weekend...