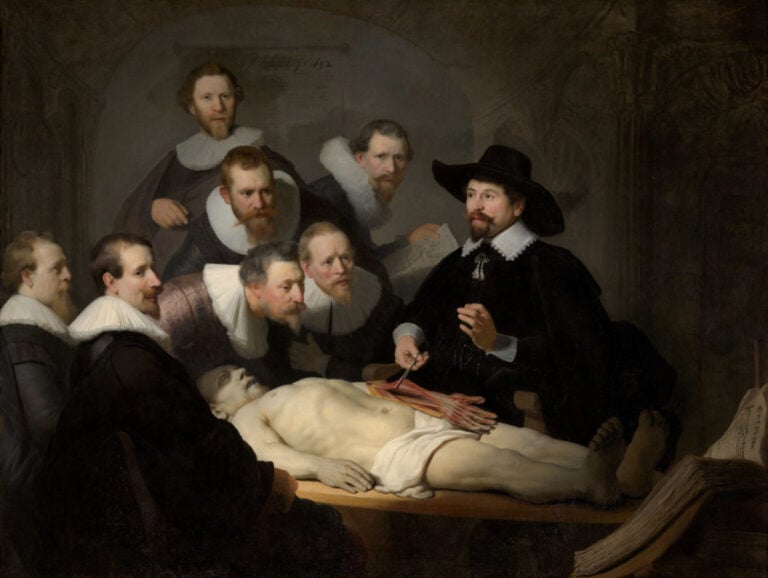 Since the beginning of the Covid-19 pandemic, we have heard a lot about doctors and healthcare workers, thinking of them as present-day heroes facing up to death. But what do they usually do in everyday life? This journey will go through their daily routine… and through the centuries: thanks to art. Here’s a selection of doctors in paintings.

There are General Practitioners (GP’s) and Surgeons. A patient visits their GP so that they can make a diagnosis and suggest a cure. Nowadays, this happens mainly in the hospital or at the doctor’s office. In the past, however, the doctor would go to the patient’s house, elegantly dressed and without the white coat. This is what we see in these two Dutch genre paintings of the 17th century, both titled Doctor’s Visit. Here, the doctors touch, observe and listen to people. These are the same techniques that are still used today to understand the situation and make hypotheses.

2. The Surgeon: Before the Operation

A surgeon has different tasks and perhaps a different skill set. First, they evaluate and examine the patient in order to assess the potential benefits of surgical intervention. For example breathing, pulse and blood pressure must be checked. Also the patient has to be interviewed by various specialists to estimate the risks of operating them. Then, if there are no contraindications, the patient can undergo surgery and the operating room has to be prepared.

In the painting Before the Operation by Henri Gervex, the figures may represent the healthcare workers involved in the preparation of the surgical instruments visible on the left of the composition. The man delicately holding the patient’s hand is clearly performing a final check on the patient who is probably already anesthetized, just before the first incision.

Surgery can now begin! Of course, there are different specializations within surgery. When having problems with bones and muscles, an orthopedic surgeon should be called. Whereas when brain surgery is needed, a neurosurgeon is the first port of call. As is the case today, not everyone trusted the doctors back in the 1600s. Just look at the patient and their relatives in the representation of doctors in painting by David Teniers the Younger. They observe the specialist skeptically while he seems to be attempting to reassure them.

And just like today, some operations performed long ago required specific tools to get a closer look at the area in question. Today a microscope, yesterday a magnifying glass.

4. Man of Science or of Faith?

However, there is something that has really changed in the medical profession: the magical and spiritual aspects of the healers. Currently, medicine and surgery are practiced using the scientific method and have become a more “laic” field. In the not too distant past, religious figures were involved not only as carers of souls but also of bodies.

In a painting produced a little more than a century ago, a bishop can be seen blessing a pioneering operation on a man who has just had his limb amputated. Or perhaps he is merely giving him a final farewell before he succumbs to his inevitable fate. The bishop is a fundamental figure and even though he participates in the scene, he does not operate himself.

Meanwhile, in previous centuries some saints seem to have been surgeons themselves. Therefore, when they are represented in paintings it may be in the medical healing of a person, amalgamated together with some “miraculous” features, especially during the mystical Middle Ages or in the Renaissance. This is the case of Saint Luke, Saints Cosmas and Damian.

Saints Cosmas and Damian were twins who promoted both medicine and Christianity. We could say they were doctors of both the Church and Science! Their duality is perfectly represented in a panel from the 16th century, which depicts the replacement of a gangrenous leg with a healthy one taken from a corpse. At the same time a snake is expelled from the body of a reaper.

Saint Luke is often represented as a painter or as someone involved heavily in medical tasks. He is in fact not only the patron saint of artists, but as well of doctors and surgeons. However, studies have concluded that he was more likely a doctor than an artist. For example, in the painting by Juan de Sevilla, he is performing head surgery on a man and some other figures observe or wait for their turn. Saint Luke is evidently bigger than the other characters, probably symbolizing his greatness both as a saint and as a surgeon.

6. Teaching and Learning in Medicine

Miraculously or not, the surgeon completes their daily duties in the operating room. Nevertheless, the work of a doctor is not complete yet: his students wish to become doctors, too. Teaching both theory and practice has always been an essential part of the medical world because it stands both on learning books and stealing your own teachers’ thunder.

Dr. Tulp teaches the anatomy of an arm to his students in the iconic example of doctors in paintings by Rembrandt. Dr. Laennec shows how to recognize pathological sounds in a patient’s chest.

A little more time in the day is necessary for staying up to date and carrying out research. A doctor never stops learning, just like Dr. Leroy in the panel by Jacques-Louis David. Notice the author of the book on the desk – it is Hippocrates, generally considered the father of medicine.

The working day has now finally ended and the doctor can go home. At last, some rest wearing their favorite comfortable clothes! Dr. Pozzi probably used to do the same. He was a pioneering surgeon who loved his nightgown so much he wanted to be painted in it! Good night, tomorrow will be another day of hard work!

8. And What About Women?

Women are present in medicine and surgery since the beginning of human history. However, women have historically had lower participation levels in medical fields compared to men as in most other types of job. This is not a surprise: work was a man’s affair, home and family was a woman’s mission. Due to their minor presence in this specific field and because of their consideration as the “weaker sex”, female doctors are extremely rare in art history.

No one took an interest in representing a woman doing a traditionally man’s job. The only notable artwork that can be found is a medieval miniature of Hildegard von Bingen, a Christian and very talented nun. She contributed to many humanistic and scientific fields, including medicine. However, even her miniature does not really represent the female medical job: she is receiving a divine inspiration to write something.

Medicine is now practiced by everyone, without limitations because of the circumstances of their birth or lifestyle choices. Women, in particular, are no longer a minority of doctors, they are now the majority indeed. Therefore, we should strongly encourage the representation of female doctors in paintings, as well as the representation of doctors of every ethnicity!