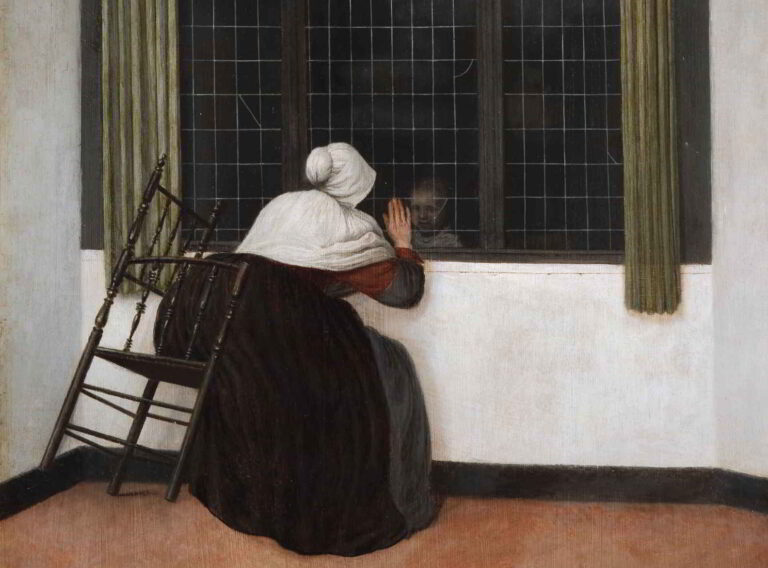 Jacobus Vrel is a ghostly figure in art history because, up to this moment, there is almost no official data about him. No record of his existence has been found, no date of birth, nor where he lived. His work does not help with this investigation either. So, it has been quite courageous that a team of researchers from the Bayerische Staatsgemäldesammlungen in Munich, the Fondation Custodia, Frits Lugt Collection in Paris, and the Mauritshuis in The Hague decided to create a catalogue raisonné and make a dedicated exhibition considering at this moment there are only 50 works of art attributed to Vrel.

For the first time, the name “Jacob Frell” appears as such in the list of pictures owned by Archduke Leopold Wilhelm of Habsburg (1614–1662). He was the prince Governor of the Southern Netherlands (1647–1656) and one of the greatest collectors during the 17th century.

Archduke Leopold Wilhelm appointed the Flemish painter David Teniers the Younger (1610–1690) as the “curator” of his gallery to look after his collection in Brussels. Shortly before the prince’s return to Vienna, the artist undertook a collection catalog that opens with a Catalogus nominum pictorum, listing the names of the painters whose works feature in the collection. It is here that “Iacobus Frell” is listed, although at this time no paintings by his hand are mentioned. It was determined that Landscape with Two Men and a Woman Conversing and the Interior with a Woman Sleeping by the Fireplace appear along with Woman Leaning out of an Open Window (1654) in the inventory of the collection of Archduke Leopold Wilhelm.

Théophile Thoré (1807–1869), a great French art critic better known as Thoré-Bürger, brought Jacobus Vrel out of the shadows. He owned no less than four Vrel paintings, however, he initially attributed them to Johannes Vermeer. In 1866, Thoré published a catalogue raisonné of Vermeer’s oeuvre. He divided the work by subjects. An Old Woman Reading was placed among the single-figure paintings’ Moreover, the entire group of views of cities and houses, alleyways, etc. consisted almost exclusively of works by Vrel.

In the opinion of Wilhelm Valentiner, director of the Detroit Institute of Arts, the confusion is due to the fact that “he has in common with Vermeer the simplicity of composition, the curious neglect of details, unusual in Dutch art”.

In 1893, the Dutch art historian Cornelis Hofstede de Groot (1863–1930) was the first one to start an official search for Vrel. In 1915, he published an article that was the first entirely devoted to Vrel, to which he added Church Interior and the Woman Leaning out of an Open Window. Also for the first time, De Groot gives an opinion as to the geographical origin of Jacobus Vrel. In his words:

His technique is unquestionably Dutch; there is nothing in his pictorial treatment, his brushwork, his choice of color to hint at foreign influences. His chiaroscuro is Dutch and his taste for tonal painting […] equally so.

De Groot’s investigations in determining the geographical origins of Vrel started with the name and all the variants: Frel, Frell, Frelle, Vriel, Vreel Verel, Varel, Verhel. Unfortunately, this did not bring any results.

Stylistic similarities were taken into consideration and the resemblance to works of Johannes Vermeer, Esaias Boursse, and Gerard ter Borch lead to Delft, Amsterdam, and Zwolle. Efforts have also been made to identify architectural details such as shop signs, bakeries, exorcising crosses, and even to determine whether the monks depicted in two of his paintings might help us to determine Vrel’s place of residence. Nevertheless, despite the numerous researches on the subject, no place of residence or origin has been established.

Woman Leaning out of an Open Window in Vienna is the only work by Vrel that is dated – 1654.

For the majority of his other paintings, dendrochronological analyses have been conducted. Dendrochronology is the science that deals with the dating and study of the annual growth increments, or tree rings, in woody trees and shrubs. Dendrochronology focuses on the annual periodicity of growth which is controlled by the climate, e.g. temperature and rainfall. In art history, it can offer a terminus post-quem for the creation of a painting by determining the felling date of the tree which provided the wood for the panel.

Peter Klein, a specialist in this field,  determined that Vrel almost always chose panels of Baltic oak. Research carried out on the paintings in Antwerp, Oxford, and Washington has led to the conclusion that these paintings originated in roughly the same period, shortly after 1650.

From the 32 paintings by Jacobus Vrel that have been analyzed, the conclusions indicate that the wood used for 31 paintings came from the Polish or Baltic regions and in only one case from western Germany or the Netherlands. Unfortunately, due to the COVID–19 pandemic, it has not been possible to analyze Woman Leaning out of an Open Window, and results with the other dendrochronological analysis have not been correlated yet.

Two-thirds of the 50 known works by Vrel are signed. He used to sign with a monogram, as well as with his full name. The first name is always written in the Latinized form Jacubus. However, he usually uses just the initial “J”. For the last name, different spellings have been identified: “Vrel”, “Vrelle”, “Vreelle” and “Vreel” or “Frel”. Moreover, the researchers have identified three types of signatures. In the street scenes, he used a full signature or a monogram, placed on a stone, wall, post, or canopy.

In the interior paintings, Vrel usually placed his signature in dark letters on a painted scrap of parchment or paper lying on the floor, in clearly visible places. The placement of the strips of paper on the floor echoes paintings of the precursors of the Italian Renaissance, such as Vittore Carpaccio (1465– 1525/26) in Venice.

In terms of pictorial ideas, Vrel was certainly a precursor rather than a follower, having developed novel genres in townscapes and domestic interiors, both of which were to become increasingly important. Vrel had an important contribution to the art world through his intimate and atmospheric paintings, depicting quiet and contemplative moments of everyday life.

Through his work, he introduces us to the world of lower-middle-class households portraying domestic activities like stoking the fire, tending to the sick, or caring for children. His figures seem quirky and introverted. Vrel’s interiors often delineate moments suspended in time, during which the female figures are doing nothing.

Almost none of the people depicted in Vrel’s paintings make contact with the viewer, quite the contrary. They either turn away or have just part of the face visible. Consequently, the viewer’s attention is drawn to what the figures are looking at, including what is beyond the open window or door through which they gaze. Even so, sometimes, precisely what the figure is looking at remains hidden to us, enhancing the mystery. Sometimes, the message of his painting remains vague and undelivered.

Vrel’s street scenes are vivid thanks to the multitude of earth tones with a contrasting interplay of light and dark colors present Also, as a result of the higher horizon line and the frame-filling buildings, the urban space seems self-contained, almost like an interior evoking a stage-like set. Narrow alleyways, buildings placed parallel to the picture plane, and figures in windows, usually define urban spaces.

One of his most famous works, as well as mysterious, is A Seated Woman Looking at a Child through a Window, currently in Paris.

Karin Leonard best describes the atmosphere in the painting:

“The encounter between the woman and the child may be understood as a casual greeting, but this is not very realistic. In fact, the contrast of the bright space in which the woman is located and the dark corridor or room where the child dimly appears opens up a gap between two worlds. The connection between the two figures is at a tipping point, just like the chair whose construction is so fragile that it is barely able to support the heavy figure: its position is not very plausible within a reality which can be explained physically. Consequently, the chair looks as if it could slip away any moment. The unease it brings into a seemingly everyday situation is offset by the way the woman’s hand gently, almost imploringly touches the glass. With keen powers of observation, Vrel has rendered a number of cracks and repairs in the window pane. One crack appears right in front of the child’s face whose outlines dissolve in the dark, in marked contrast to the female figure with her white bonnet and scarf, who stands out strongly against the background and whose tilting movement, incidentally, repeats the forward-leaning posture we have already encountered in the Brussels painting. Again, a crumpled piece of paper is lying on the floor of the otherwise meticulously organized space whose smooth surfaces are interrupted only once by a nail driven into the wall at the top right. The window grid underscores the geometric spatial structure but is disrupted in the upper right corner due to some glaring reflected light whose origin remains mysterious.”

Despite the growing interest in Vrel’s work, the artist has thus far been denied a monographic exhibition. An exhibition on the artist was planned for 2020-2021, but the project had to be postponed due to the pandemic. There are new plans for an exhibition in Mauritshuis in The Hague and in Fondation Custodia in Paris for 2023.