Home and Migration in the Artworks of Zarina Hashmi 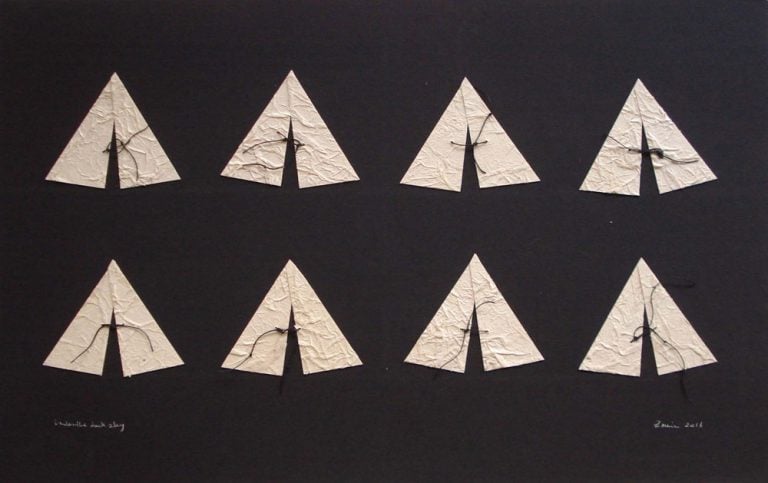 Zarina Hashmi (1937–2020), was an Indian-American artist and printmaker based in New York City. She was known by her professional name, Zarina. Associated with the Minimalist movement, her works include drawings, prints, and sculptures. Her art was heavily influenced by her identity as a Muslim-born Indian woman and a lifetime spent traveling from place to place.

Zarina was born in Aligarh in British India and earned a degree in Mathematics before studying printmaking in Thailand, Paris, and Tokyo. As a leading woman artist, Zarina joined the New York Feminist Art Institute and was also a member of the editorial board of the feminist art journal Heresies.

She preferred paper as her main medium of artistic expression. She mentioned that paper is like skin:

It can be stained, pierced and moulded and it still has the capability of breathing and aging. It has a fragility and resilience.

Zarina, Interview with The Wire Magazine.

1947 Partition of the Indian Subcontinent

Zarina explored the meaning of home in her works. For her, home is fluid and transcends the physical space. She was very much affected by her identity as a Muslim-born woman and used lots of geometrical patterns commonly found in Islamic architecture.

Zarina was fascinated with black ink made from charcoal or graphite because of her love for the written word. Ghar (Home) suggests that no matter what material – stone, wood, or paper – our homes are made of, they can burn down to nothing.

In Home Is a Foreign Place, Zarina reflected upon her faraway childhood home. She once explained how this piece is her narrative of the house where she was born and left, never to return.

Home Is a Foreign Place is a collection of 36 woodblock prints, each featuring a geometric and monochromatic design. To create these images, Zarina wrote a list of meaningful words to her like axis, distance, road, and wall. She sent the list to a calligrapher in Pakistan who wrote them in nastaliq script of the native Urdu language. Back in her studio in New York, Zarina converted the words into idea-images.

The images are a visual vocabulary for expressing her feelings of home, memory, and loss. Talking about home Zarina mentioned:

I understood from a very early age that home is not necessarily a permanent place. It is an idea we carry with us wherever we go. We are our homes.

Home is a Foreign Place was made during a difficult period in Zarina’s life. She was evicted from her Manhattan home and the result is a collection of image-ideas. Doors, windows, streets, lanes, and weather all convey an idea of home.

Atlas of My World (Six Works) explores the role of geographical and political boundaries. The Partition of the Indian Subcontinent in 1947 was a traumatic experience for Zarina. The Partition led to the creation of Pakistan and Bangladesh. Born in pre-Partition India, Zarina was sensitive to borders created between India and Pakistan.

The collection shows the newly created borders in the Indian subcontinent and around the world. Her bird’s eye view of the maps connects her movement from India with other migrants, refugees, and victims of war. A theme she continued to explore in her works.

Letters from Home is a series of prints based on letters written by Zarina’s sister, Rani, who lived in Pakistan. The handwritten lines in the letters are overlaid with geometrical patterns and maps of cities. The letters mark personal moments like the death of parents, the selling of Rani’s home, the sadness of children moving away, and how much she missed Zarina’s presence. The maps convey the loss and dispossession of home due to political conflict like the Partition.

The Pain of Migration

Tears of the Sea features a collection of 99 rectangular forms in a grid. The rectangles start with five pearls each at the top with only one each at the bottom. The pearls seem to fall down like tears. The composition most likely refers to the refugee crisis in Africa and Syria. Like the number of pearls, the number of refugee boats lessen as they reach the shores, with many dying by drowning.

In Sinking Boat with a Heartbeat, Zarina expressed the pain of exile, especially that of Syrian refugees. She shows an electrocardiogram inside a boat to remind us of the risks refugees take to live. The composition suggests that the heartbeat is the same regardless of origin, race, and religion.

Zarina was sensitive to current political debates and expressed her views in her works. In Almost There, she was disturbed by the Muslim ban in the US by President Trump. Living in New York at the time, 80-year-old Zarina felt her journey on dark roads had not ended yet.

The print shows a distant horizon represented by a rough outline. One cannot differentiate between the sky and land, past and present, and home and the world.

When Zarina left her home in Aligarh, India, little did she know that its memories would continue to haunt her throughout her life. Art became a way for her to explore the meaning of home, journey, and migration. Her works continued to pose the question: What is home?