In Life, In Art, Till Death Do Us Part: The Romance Of Georgina And Lucílio de Albuquerque 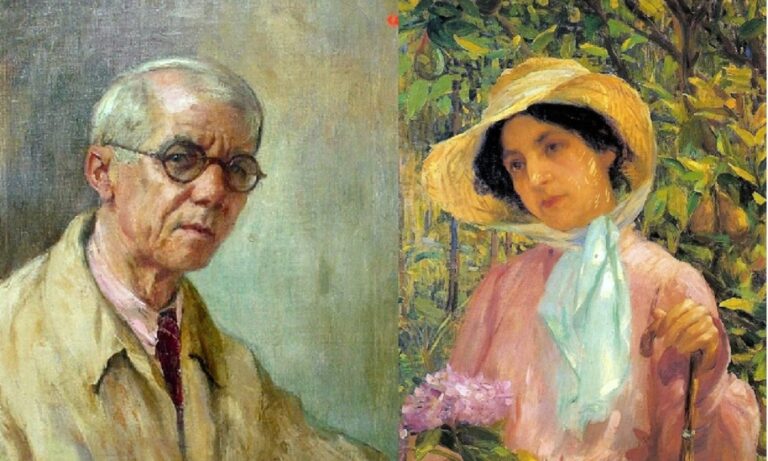 Do you like art history and love stories? You’ve come to the right place because here we have both! Today we present the story of love and art between Georgina and Lucílio, two Brazilian painters who fell in love, and shared a bed, an atelier and a lifetime. I hope you fall in love with them too.

So, ladies first. Her works and passion for art made Georgina an important figure in Brazilian artistic circles. She once wrote that she felt she was born a painter:

I feel like I was born a painter, I went to museums and I tried to paint, to paint a lot at all hours, at all times of the day, not even when my two children were small, I left a day to work. It’s what I do, at all times.

She began to paint at a very young age, first with a private teacher, an Italian painter living in her city, and then her professional training began at the age of 15, when she traveled to Rio de Janeiro to enroll in the School of Fine Arts.

She was well known for the beauty of her artworks and also worked as a teacher, later in life she even directed the School of Fine Arts. None of these phrases would sound so strange today, but there is one detail I have not yet told: Georgina was born in 1885 and her artistic trajectory happened in the first years of the 20th century, the time when women were not considered professional artists in Brazil.

Lucílio was almost ten years older than her, and studied Law in São Paulo. Around the turn of the century, he decided to drop out and study painting at the School of Fine Arts instead. That is where Georgina and Lucílio met each other for the first time.

The two had lessons with the same teacher, Henrique Bernardelli, and got closer and closer. What once was an artistic bond soon became a sincere friendship, which later turned into love and in 1906 into a marriage – and the promise of the union in life and in art.

In the same year, Lucílio won a scholarship to study art in Europe, which was very common at the time. Every year when the Salon was opened, the award-winning artist would earn a trip to study for one or two years in any European country. The couple went to France (and only came back in 1911).

In France, Lucílio and Georgina came in contact with impressionism and symbolism, which are reflected in their works. Both were interested in the effects of light and were enchanted by the technique of painting in plein air. They spent a lot of time painting together and serving as models to each other. They also remained classmates, studying together at the Julian Academy while Lucílio also participated in Salons in Paris, Brussels and Turin.

When they returned to Brazil, the two became professors of the Academy of Fine Arts. Lucílio became the director of the institution in 1937, but he resigned from office for health reasons shortly after. Meanwhile, Georgina taught not only at the Academy but also at other universities.

The painful blow came in 1939. After more than thirty years of companionship in art and love, the death of Lucílio separated him from Georgina. But she refused to accept it with resignation, and the following year she founded the Lucílio de Albuquerque Museum in her house. As an artist, Georgina knew the value and importance of the work of a fellow painter. As a wife, she wanted to honor the memory of the man she loved as much as she loved her own art.

A few years after Lucílio’s death, in 1952 Georgina was invited to direct the National School of Fine Arts, a position that she held for two years. She was the first woman to run the institution. She died in 1962. Maybe, Georgina and Lucílio are still painting together, wherever they are.