Pollen, Purity and Patience: A Journey of Creation with Wolfgang Laib 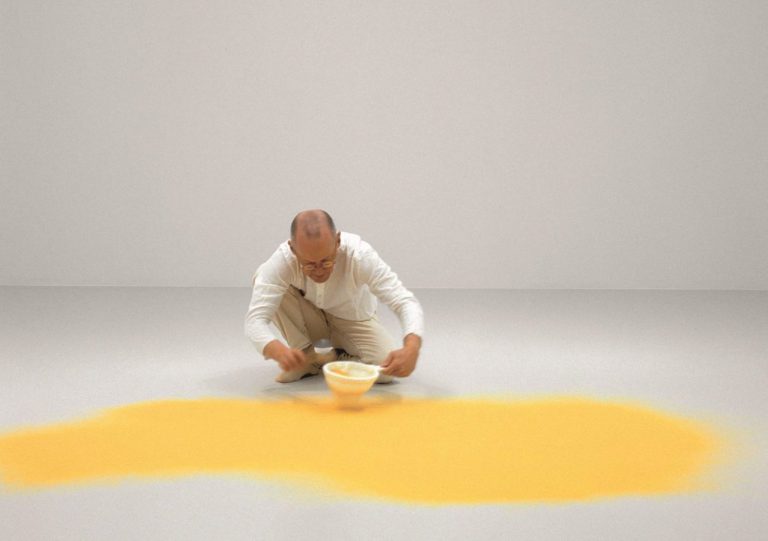 Wolfgang Laib installing pollen for an exhibition, Pollen from Hazelnut exhibition at the Museum of Modern Art, New York, USA.

10 Masterpieces for Boosting Good Feng Shui in Your House

The Art of Mandala – Matrix Reloaded

Wolfgang Laib (born 1950) is a contemporary German sculptor. He works with natural materials that emanate life energies: milk, pollen, rice and beeswax along with wood, stone and brass to create large- scale, site-specific installations. Laib is deeply inspired by nature, the teachings of St. Francis and the Asian philosophies of Taoism, Zen Buddhism and Lao-tse. Laib creates works that are not about himself, but refer to the ”essence of life’’. His work is undefinable, though it embodies elements of performance art, minimalism and conceptual art.

Wolfgang Laib was born on March 25, 1950 in Metzingen, Germany. When he was around twelve years old, the family moved to a small village close to Biberach an der Riss where his father had constructed a splendid glass house surrounded by a lush landscape with forest and meadows bursting with pollen. Living here greatly impacted the entire family over the years. Laib’s family also had a great curiosity and appreciation for art. They traveled around Europe and abroad to Turkey, India and several Asian countries to learn about the cultures from where the art works they so admired originated.

Laib began to study medicine in 1968 at the University of Tuebingen. Although his father was a doctor, he did not pressure Laib to follow in his footsteps. During the course of his studies, Laib became disenchanted with the medical world, so he turned to art. Born out of tension, he created his first sculpture from stone in 1972 titled Brahmanda (Sanskrit for a ‘universal egg’). Even though Laib completed his medical education, he had already decided halfway through his studies that he would become an artist. His family fully supported his decision and following his graduation, Laib returned to his family’s village house to begin work on his first Milk Stone piece.

Before Laib started his creative journey with pollen, he worked with stone. Taking a pure white square of Carrara marble, Laib meticulously sanded a subtle rim around the top surface of the stone that took him several months. Once completed, he slowly and carefully poured a thin layer of milk over the stone that filled up to the edges around the rim and prevented the milk from spilling over. The still milk created a reflective surface that transformed permanence to transience. To avoid spoilage, the milk was changed every couple of days. Laib’s first Milk Stone was created in 1975. This quiet observance expands upon stillness and ritual. Since then, he has created other milk stones of similar shape that vary in size. Laib still continues to explore this idea.

Starting in 1977, Laib began to hand harvest hazelnut pollen from the fields, meadows and woods that surrounded his family’s home in the village. This solitary practice continued for days and months on end. Repetitive and meditative, this routine became an intimate, daily ritual for Laib as he gathered the pollen by hand. This slow art practice allowed him to learn about the pollen on a deeper level so he could truly understand this living material.

In 2013, Laib created Pollen from Hazelnut, a massive, site-specific work that was installed in the atrium at the Museum of Modern Art in New York. For twenty years, he had collected hazelnut pollen from the land around his home and used this pollen in the exhibition. This was his largest pollen installation to date.

For every exhibition, Laib sifts the raw pollen onto the floor of galleries and museums creating basic, geometric shapes. Aside from hazelnut pollen, he has also collected and worked with pine and dandelion pollen among many other varieties. Following every pollen exhibition, Laib recollects and cleans the pollen then stores it in glass jars for later use.

From working with pollen, beeswax seemed to follow inevitably. Laib first began to work with beeswax in 1987. The purity of its color generates a warmth and its fragrant aroma deepens the experience of the viewers. In 2000, Laib created his first beeswax chamber in nature inside a cave in the French Pyrenees that can only be reached by footpath.

Following a trip to Ravenna, Italy, Laib was inspired and created a temporary installation inside the basilica of Sant’Apollinaire in Classe in 2014. This triangular structure or ziggurat was composed of singular squares of beeswax. Installed inside this sacred place, the power of nature unfolded in time and space.

In 2013, Laib created a small chamber made entirely from beeswax titled, Where have you gone-where are you going? He used 440 pounds of melted beeswax heated at just the right temperature to maintain its radiance to complete this piece. Laib used many different tools to apply the beeswax and the work is permanently installed at the Phillips Collection in Washington D.C. Over the years, he has created several beeswax installations at museums in America and Europe that include the Museum of Modern Art in New York, the Kunstmuseum Stuggart in Germany, The Depont Museum of Contemporary Art, Tilburg, Netherlands and the Kunstmuseum Bonn in Germany.

Laib began to work with rice in 1983. He took dry, white rice and often paired it with marble sculptures, pollen or hand-crafted brass objects. These rice works present themselves as offerings referencing his many trips abroad where he was exposed to temples and shrines. His first Rice House was made in 1988, a roughly carved, unpolished marble in a peaked, rectangular form surrounded by tiny stacks of rice and pollen. Other rice works followed including the memorable, Passageway Inside-Downside, multiples of small, brass boats that rested upon islands of rice. In 2011, Laib created Unlimited Ocean, a colossal grid composed of 30,000 small rice mounds and seven piles of pollen that nearly covered the entire gallery space at the Art Institute in Chicago.

Since Laib began to work as an artist, he has had numerous exhibitions in galleries, museums and scared spaces around the world. In 2006, Laib established a studio in southern India near Madurai where he spends at least two months a year. In 2015, he was honored with the Praemium Imperiale, one of the most prestigious art awards in the world given by the Imperial family of Japan. Today, Laib, his wife, Carolyn Reep, an Asian art conservator, and their daughter, Chandra Maria, live and work between New York, Germany and India.

Wolfgang Laib from video trailer for ”Without Time, Without Place, Without Body” exhibition organized by the Museo Novecento, Florence, Italy. October 2019-January 2020.

Wolfgang Laib’s love and devotion for the materials he works with transcend the physical. From ephemeral to eternal, his works magnify the natural world and the universe, encouraging us to contemplate humanity’s lost connection with nature. By reawakening our curiosity, Laib gives us hope to repair our relationship with the living world.